WEHO WANTS YOU AS A NEW RECRUIT 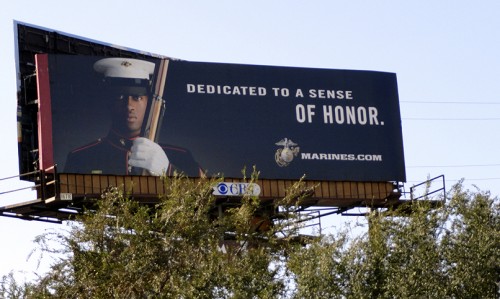 Is this billboard an advertisement for a new military themed circuit party?  Or is there a sale on military inspired fetish gear going at the 665 leather boutique located across the street from where this billboard now stands?

I totally get that West Hollywood will never be the same gay ghetto it once was, but I NEVAH thought I would see the day when I would face a Marine plastered on a billboard on Santa Monica Blvd in the Heart of Weho’s Boystown, only walking distance from Micky’s and Rage (the gay discos).

On the one hand, if we want equality in the military, then this comes with the territory.  The Marines/Army/Navy recruiters have the right to smack the pavements inside any gay ghetto and recruit homos to be…um…of service.  I also get that there are benefits to being part of the military with their career opportunities and how they send low income kids to college and how these kids get to use words like “The Honor. The Proud. The Marines.”

On the other hand, this billboard makes the city of West Hollywood look a little…whorie.  I don’t know, is it too soon?  Yesterday December 21, 2011 marked the first anniversary since President Obama signed legislation enabling the repeal of “Don’t Ask, Don’t Tell,” but the lift on the ban didn’t go into full effect until this past September 20.  That Marines billboard has been up for a couple of weeks now, so we’re talking about less than 90 days and already we’ve got the Marines knocking on our doors.  And let’s be real here, this is not the first time that this particular Marines billboard has gone up on Santa Monica Blvd in the heart of Weho.  I’m pretty sure I saw it hiding behind some overgrown trees on the corner of Santa Monica Blvd and Westbourne Dr, only a block away from the Big Gay Starbucks last spring.  It wasn’t up for very long, but it was up there.  Then it was replaced by Lady Gaga’s Born This Way album promo which was ooohh sooo IRONIC—wake up people!!!

My brother joined the Marines fresh out of high school way back when.  Needless to say, it was a life altering experience for him.  I can never decide if it was a good experience or not.  He’s quick on speaking of the discipline when he’s controlling situations, but he’s not so quick to speak of the actual military experience.

My brother and I shared a phone before he went into service.  It was the only phone number he gave out, so that’s where he got his calls whenever they allowed him to visit home.  Sometimes he would get calls from his Marine sergeant, commander, or whatever the fuck you call those fuckers that are higher than a grunt in military command.  Anyway, this bulldog called my phone looking for my brother.   He heard Madonna’s Vogue playing on my answering machine (yes, machine).  Then my queeny ass came on asking to “Leave a message,” and ended it with a high pitched “I love you Madonna,” before hearing the beep (it was supposed to be ironical).

“There is something very wrong with this answering machine,” the fucker barked into my voice message recording and then he left this aggressive message for my brother in this almost cartoonish military voice like you hear on TV—“Left-right-left!”

Ooooh, it burned me up so much.  “He straight up called me a fag!”  I bitched at my brother.  “A fag!”  I was like fuck that fucker.  I’m not changing my fucking answering machine message.  “I am an artist and this is how I choose to express myself,” I told him.

So the next time this sergeant person dialed my number looking for my brother, he heard a quote straight out of Madonna’s SEX book that went along the lines of:

“Do you think it’s possible to experience pleasure and pain at the same time?” I asked in a raspy voice that sounded more like Silence of the Lambs than Body of evidence—“Of course!  That’s what ass fucking is all about.  All your nerve endings are in your ass, but if you’re not careful, things can go very wrong.”  Then cut to a snippet from the song Erotica and BEEP!

“That’s sick,” the sergeant spat, and then he hung up.  I think he was totally obsessed with me.

I can’t remember if my brother got his own phone or not, but I never heard from that sergeant again.

Anyway, I’m not sure what it means to plant a Marines billboard in the heart of West Hollywood.  Times…they are a changin’.  I know Uncle Sam says that he wants YOU.

But does he really?