SMELL THE TRUTH – I DARE YOU 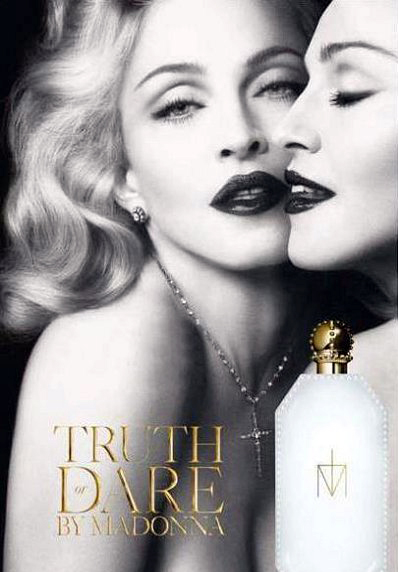 Celebrity fragrances have been done by Beyonce, Paris, Britney and even Debbie Gibson (remember Electric Youth?  That shit smelled like cough syrup.), so why not a perfume by M?  All you have to do is attach it to a recognizable movie name and viola!  Fans are bound to lap that shit up.  It used to be that “Madonna did it,” but now it’s like “Madonna is doing it ALSO,” which is fine.  There’s only so much a person can do first, or copy first, or bring to the forefront first.

Just in time for the holidays, this ad for M’s new Fragrance “Truth or Dare by Madonna” was leaked to the media—leakage is a re-occurring theme at Madonna Camp lately and I hear they’re arresting people for it too.  They should arrest the person who leaked those horrible untouched photos from the Hard Candy sessions.  It happened right after she left WB.

I’m not into cologne.  I can’t stand a guy who won’t leave home without it (we call these guys “cologne queens”).  Nothing says “I don’t smell good,” like spraying yourself with some artificial fragrance that is supposed to make you smell good.  It can be an invasion to your personal space.  I’m not saying I’m into B.O. or anything nasty like that, cuz I’m not–don’t get it twisted.  I just can’t stand cologne.  I’d rather you smell like soap, or fabric softener, or clean underwear—there’s fragrance for you, “Clean Underwear by Paulo Murillo.”

I hear Madonna smells good.  I’m forever a hopeless and helpless fan (ask anybody), I just don’t know about her jumping the celebrity fragrance bandwagon.  Of course, the image for the ad is flawless (it’s ALL about the image).  However the fragrance bottle reminds of a mini coffin fit for a queen.  Maybe it’s supposed to be ironic?  I’m never sure.

Truth or Dare by Madonna.  Smell the truth at a Macy’s near you very soon.

I double dog dare you.

WEHO WANTS YOU AS A NEW RECRUIT IN BARBIE WE TRUST