IN BARBIE WE TRUST 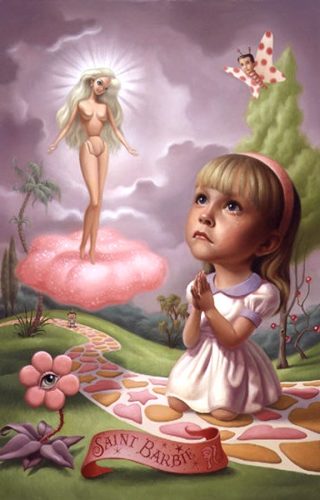 Yeah, I played with Barbie when I was a kid (most gay boys did it, but not many will admit it nowadays).  Barbie was clearly in a boy’s world whenever I got my hands on her.  Of course she was a bitch and a tease and she wanted you to think she was a whore in her super slutty clothes and seductive moves, but she never put out and she treated Ken like shit because he was so damn pretty and perfect, but he was a lousy lay with his tiny bump and his pretty smile that got on her nerves because deep down inside she knew that smile was gay (in a bad way).

For some reason Barbie’s life was always in danger whenever she stepped into my twisted dimension.  She was always fighting for her life.  Her hair would start off perfectly coiffed and end up a mess after she spent hours fighting off monsters and running for her life.  Her biggest enemy was Jason of Friday the 13th and I always recreated that scene from Jaws where the pretty blonde gets pulled underwater and then gets mawled by a vicious sea monster.  She was a real fighter.  My Barbie always wore dresses made out of toilet tissue, so that when she ran to escape Jason’s murdering machete, her dress would tear and a red marker would smear and spread like it was real blood.  And oh my gawd, was that girl ever a scream queen—“AAAAHHH!  NOOoooo!!!  Somebody help me!  Please!!!  AAAAHHHH!  AUGH!!!”

Sometimes I let Barbie live. Other times my mom would find her buried in the backyard.

My mother tried to beat the Barbie out of me, like most Mexican mothers are programmed to do when a boy child just ain’t right–especially when she keeps finding Barbie shoes in her eldest boy’s pants in the laundry basket.  She would be like, “Ven aca cabron.  Ya te dije que no jueges con monas!”  And it was like bam-bam-BAM with the first shoe she could get her hands on.

You best believe that Barbie was not welcomed in our home, but mostly because my mother KNEW!!!  And my sisters didn’t help matters any.  I learned very early on that there are two kinds of little girls in this world: Little girls that like Barbie and little girls that like babies (as in baby dolls).  I grew up with three sisters and neither of them had the slightest interest for the 11 ½ inch blond supermodel with the big boobs and the tiny waist.  My sisters preferred to play house than to play first woman to walk on the moon, which sucked ass for me, cuz that made getting my hands on a Barbie very difficult…but not impossible, cuz my ass was stubborn.  Barbie paraphernalia was contraband in our household, so that meant I had to be super sly like a ninja.  It also meant little girls had better lock up their dolls whenever I came around the neighborhood.

There were two black girls that lived around the corner from my house on Lime Street; Shekera and Sadrea (actual names I-swear-to-gawd).  They had black Barbies with the pink Corvette, Dream House and a shit load of shiny clothes (this was the 80s, so outfits were super shiny back then).  I wanted a black Barbie so badly on account of they were so rare and exotic, but my ass got caught every time I tried to walk away with one from their front lawn.  I remember their teenaged aunt pulling a black Barbie out of my pants one day.  I was not welcomed to Shekera and Sedrea’s after that little incident.

I think of Christmas and I think of the little boys everywhere opening a box of X-Men, or GI-Joes when what they want is the disheveled Barbie doll that’s been thrown on the floor. My heart goes out to them.  I wanna tell these special little boys that it gets better.  Eventually you grow up, and you spend a shitload of money on all the black little Barbies your heart desires…THEN you sell them on Ebay for half the price, cuz Barbie can’t come to life like she used to in when you were a kid.  The shit just aint the same, but that’s OK…Barbie and I had some crazy times back in the day.  Despite the messed up hair and the torn bloody dresses, Barbie was a survivor.  Yeah, she died on occasions, but I swear to you “La Mona” never went down without a good fight.

Have a Merry Baby Jesus, Mary and Joseph Day my darrrlinks.

SMELL THE TRUTH – I DARE YOU A SHOT IN THE DARK