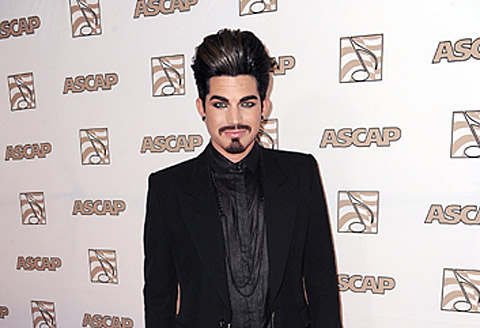 According to news outlets (in other words, the blogosphere), it went down a lil’ sumthing like this:  GQ Magazine broke down their Year In Style fashion report a few days ago with a list of man’s best dressed, as well as man’s fashion no-nos of 2011.  And like anything with the best and worst, they glorify the best and make fun of the worst.  OK, so along comes glam boy/girl/girl/boy Adam Lambert with jet black facial hair and eyeliner so heavy he looks like Morticia Adams with a…(pregnant pause)…um, testosterone problem.

Of course the PC Police was very swift.  Someone from GLAD tweeted a response that twisted GQ’s joke into some sort of anti gay slurr against the entire gay community because Adam happens to be gay.  Yup, GLAD swiftly stepped in with their strict ruler to smack a few naughty fingers and they demanded an immediate apology to @adamlambert & the gay community–throwing my ass and other like minded homos who don’t give a shit about Adam Lambert into the hot plate.

GQ is a respectable men’s magazine, so of course they conceded.  And they apologized.

“Apologize to him” — That’s EXACTLY how my mother sounded whenever she pulled my ear and forced me to be nice to my brother when I was a kid.

I have nothing against Adam Lambert (aside from the fact that he ripped Dave Navarro’s facial hair right off of his face, circa many years ago) but the way I see it…(a) GQ never tweeted anything “about being gay?”  They never even used the word “gay,” it was GLAD who took us there.  And (b) Adam Lambert makes a VERY decent living in the realm of androgyny.  Jokes about him producing low testosterone are part of the job description.  And (c) knowing this, he purposely stepped onto a red carpet in faux facial hair drag to get a reaction–leaving it wide open for a faux pas or two to follow.  I get that jokes are mean, but to say you can’t joke about this guy, or that guy because these guys are gay, makes no kind of sense–especially if that guy is cashing in on a feminine look.  Now don’t get me wrong, if GQ were talking about testosterone problems anywhere near Chaz Bono, then everyone whip out your rulers…but Adam Lambert!!!???  Give me a fucking break!!!

I found the demand for an apology and the quick apology very interesting.

I say GLAD owes the gay community an apology for making us homos look like humorless assholes.

But that’s just me.  If you don’t like it, then I’m really sorry…YOU feel that way.

L.U.V. – MADONNA GETS A GOLDEN GLOBE NOM APARTMENT WAS ROBBED IN THE HEART OF WEHO