A SHOT IN THE DARK 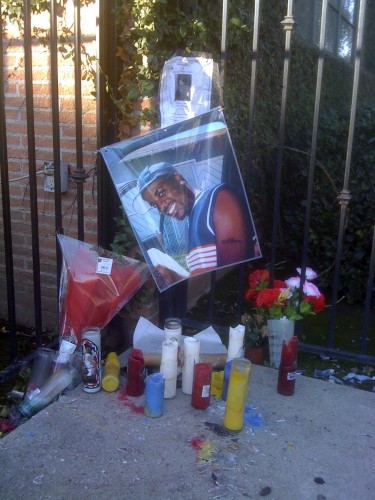 I can tell you a thing or two about drive-by shootings.  My ass grew up in Inglewood (as in no good Ingle-hood), so people getting shot on street corners is not some distant concept that I can easily detach from.  I personally have tasted the fear of the pop-pop-popping sounds that are followed by the clinking of bullets bouncing off the pavement while I cut class with a bunch of friends way back when.   It was just a bunch of stupid punks shooting to kill because our parents chose to live in the wrong city—my bud Agustin took three bullets—one on his arm, shoulder and another somwhere in his torso.  He healed from those wounds only to be shot again—the second time taking a shotgun blast on the ass for standing in the wrong corner at the wrong time of night.  He didn’t die from that one-sided gun fight either.

Nowadays, I hear about some violent crime that happened too close to home and I tend to distance myself from it like the distant past—then cut to friend and me walking towards the Arclight 24-Hour Fitness up Gower St.  We found a memorial shrine on the southwest corner of Lexington and Gower only blocks away from where my friend lives.  We gravitated towards the portrait of a young smiling man with candles spread out before him.   Of course, I immediately thought his death was the result of something gang related

Then I notice the small crumpled piece of paper taped to the gate in the background.  One look at the black and white photo of the female looking up at me and I remember the story.   This is the corner where Cassidy Chase Vickers was shot to death a month ago—November 27th to be exact, at 2 a.m. according to a note on the shrine.  This is the transgender woman everyone was talking about.  I found it odd that they used a portrait of her all done up like a guy.  And I found it fucked up that even after her death someone had the nerve to disrespect her and crumpled the piece of paper that showed an image of her in the way that she would want to be shown: A woman.

There was a note on the floor that read: “RIP Cassidy—may we never forget you.”

We stood over that dismantled memorial in silence. 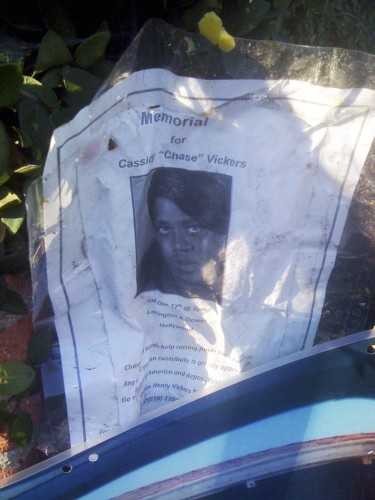 “They’re shooting trannys up in here,” My friend spoke up.

“I know bitch,” I responded quietly.  “You better watch out.”

Joking of course, cuz that’s what we do when we’re uncomfortable and outraged and overcome with a sadness that’s so hard to describe when we’re  faced with something so violent and senseless that–like it or not–is a little bit too close to home.

We keep stepping.  And we detach.  What else can we do?