LET’S HEAR IT FOR THE GO-GO BOY

Weho city council member John D’Amico first told me he was masterminding this event when I ran into him on Santa Monica Blvd many months ago.  I swore he was playing.  I mean, an official day for Go-Go Boys?  That’s like totally redic, right?  But of course, he was NOT playing.  He went for it.  And the city approved it.  So now that it’s actually happening, it kinda/sorta makes sense as most things do when they get an official stamp.  I guess Go-Go dancers have a history.  They have their purpose.  And they bring some business to the city, so honoring them in these hard times could be a win-win, right?

“Go-Go boys get appreciated plenty whenever I jam a dollar bill down their nutsack,” said one of my friends.

Then there’s my favorite, “If you’re gonna ‘appreciate’ a Go-Go boy with a dollar, you gottah take away at least a dollar’s worth of self-esteem.”

I wrote about Go-Go Dancer Appreciation Day for the Hot Topic page in Frontiers Magazine (my more respectable alterego), so of course I had to do my own investigating.  I mostly needed a picture of a G0-Go dancer shaking his sackage for some dough.  I went to Micky’s that Sunday night.  It was surprisingly packed.   I have not been to a club in a while—especially by myself.  Nothing screams lonely tired queen like standing at a dance club completely, totally and utterly ALONE without some sort of pussy posse for moral support.  I also didn’t know what the rules were regarding taking pictures of guys dancing on a pole, so I was a little nervous that I would get the boot without having my shot (it’s ALL about the shot)—oh yeah, I also worried that I would come off like a (somewhat) older perv with a camera on hand trying get pictures of crotches for my own personal use (gulp).

I’m all for appreciating the art of Go-Go dancing, but I gotz to recognize that there isn’t too much actual “dancing” on those little Go-Go platforms nowadays.  Some guys just stand there and slap their long bloated dicks from hip to hip with a a half-hearted bounce that’s completely out of dance beat.  Half of these guys aren’t even that cute, but they have huge members, or they fluff up real nicely, so they’re HIRED, leaving very little to actually “appreciate” when they get on that stage.

Then again, the guys that know how to dance tend to be a little on the fem side.  It’s really hard to maintain that masculine balance when your shaking your hips like some fucking hula girl (not judging, just sayin’).  I guess when all is said and dissected, it’s a tough gig when you throw the starving, the waxing, the bikini buying and the fluffing into the mix.

I wasn’t too impressed with the guys dancing at Micky’s that night–keeping in mind that it was a Sunday night.  One guy I recognized from a straight-to-a-free-porn-site-pump-n-dump video, so he looked a little bit beat in his leather thong.  However, there was one sexy guy who stood out in the midst of some thick fake fog.  It was like he sensed my camera the instant I walked into Icky’s.  He’s a blondish, youngish guy with a super tight body who was a good sport about me taking his picture.  I tried to explain to him that I was there for Frontiers magazine, hoping to save face–I don’t normally do this sort of thing, but he couldn’t hear me.  And he didn’t give a shit.  He rode that pole to my flashing camera like a true pro.  I was so impressed, I tipped this Go-Go boy gold with a five dollar bill.  I know I was supposed to approach him from behind, slide the bill up his inner thigh so I could cup his balls and use my thumb to ring the back doorbell, but instead I awkwardly handed him the crumpled bill, which he jammed into his junk.  I got my shot and got out I was out of there, cuz the crowd looked hungry the closer the weekened came to an end. 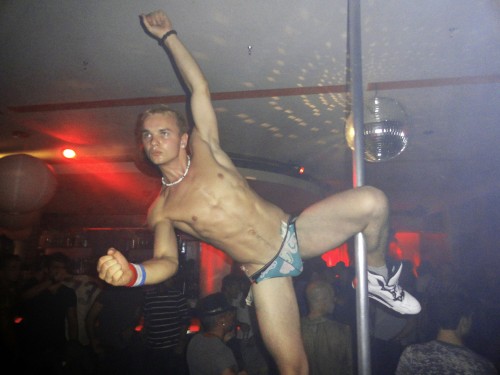 Anyway…like the song goes, I don’t see nothing wrong with a bump and grind, so come to Weho and support your local Go-Go Dancer from 4pm to 2pm on Larrabee Street between Revolver and Club Eleven.  And don’t forget your dollar bills. A guy’s gottah eat.  Right? 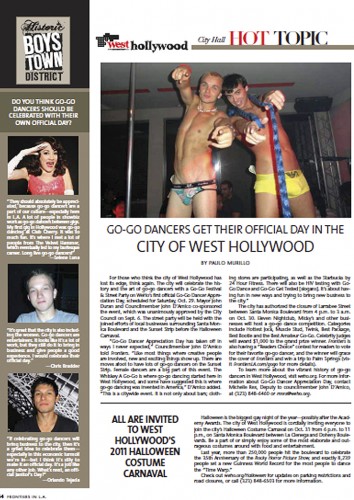