I was literally DRAGGED against my will to catch a show starring Youtube singing sensation Miss Miranda Sings at a local dive bar called “Barre” in Los Angeles (that’s singing as in the opposite of singing…um, err, in the traditional sense).  And I literally LAUGHED my ass off from the moment she walked up on this little stage doing her own take on Gaga’s Poker Face, to the moment when a baby’s head fell out of her arms (you HAD to be there).

You really should get to know Miranda.  She is way too many things.  She dances, she sings, she models, she acts and she now does magic tricks.  My guy is a HUGE fan.  He keeps bugging me with Miranda videos on my Facebook page trying to convert me into a Mirfanda.  However, up until last night I have mostly fit the bill of a Miranda hater.  I know girls like her in real life.  There’s something about her cocky wink and her delusional grandiosity that may be too close to home for yours truly (or so the Murillo-Haters may suggest).

Barre is a very small space with tiny tables piled on top of one another and very little leg room.  Of course there’s a two-drink minimum.  And the night started with this tall-cute-clumsy waiter spilling a glass of cheap white wine all over my G-Star RAW Jean shorts.  The little old lady next to me wore the stench of that wine all over her silky blouse.

I don’t know too much about Miss M. Sings, other than she is funny as BLEEP (no cursing allowed in her shows) and she has a lot of friends in high theater places.  She was joined on stage by some big theater queens–err, I mean names, like this one guy from the live production of Avenue Q, some cute guy from Glee, and some other guy from Wicked something or other.  She straight up taught them how to sing (theater people are so cute on account of they’re so little. 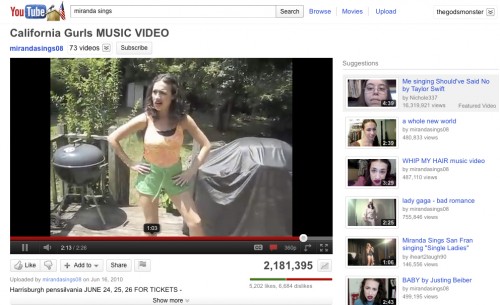 I loved when she read actual hate mail and comments that she gets on her youtube posts.  She did her rendition of Queen’s Bohemian Rhapsody.  And she even gave us what she called “Opera singing from Phantom of the Opera.”

She is bound to blow up and hopefully land herself in much bigger venues, cuz the night ended with the same tall-cute-clumsy waiter spilling a second drink on the little old lady and me–this time a Long Island Ice Tea.  The lady laughed so hard when the second glass crashed on the ground.  However, she wasn’t laughing when tall-cute-and-clumsy had the nerve to show up at the end of the night with a bill for her drinks.

Miranda did a meet a greet at the end of the show.  I told her she had me laughing me BLEEPing BLEEP off — “I am pretty great, aren’t I?” She responded modestly.  And just like THAT…instant Mirfandom.

Anyway, I’m too lazy to link her videos on this here web page, so look her up on youtube.com like the rest of us (don’t be a lazy ass).  That’s Miranda Sings.  First she’ll make you mad.  Then you’ll fall in love. 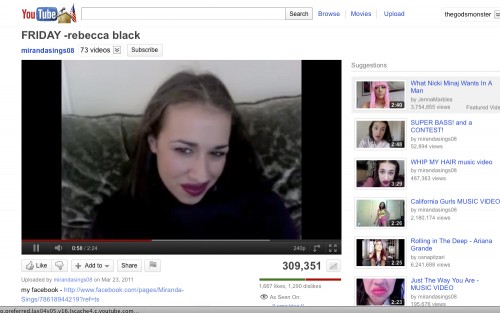