I can’t believe people still get into trouble for getting naked.  A college golf team was recently suspended for taking an unofficial photo with nothing but golf clubs covering their man parts.  Their coach, who happens to be some religious nut job, called this “a case of young people who just don’t think beyond the moment and don’t realize who they’re hurting,” according to news reports.

I’m not sure whose feelings were hurt by this lame photo.  I was mostly offended by the fact that these guys are not that hot.  I’m sorry, but golf is not exactly “sexy” where sports go.  I always think of some stuffy fat old fuck being hauled around by a caddy from one end of a field to the next.  Where’s the swim team or soccer team family portrait?

I think it’s funny that media outlets put a big censor bar over their crotches.  It’s waaayyy more suggestive than the actual photo.  And you just know there had to be at least one guy who thought this photoshoot was a bad idea (the chubby one), but he decided to drop his trousers anyway…for the team.  The end result: BUSSSTED!!! 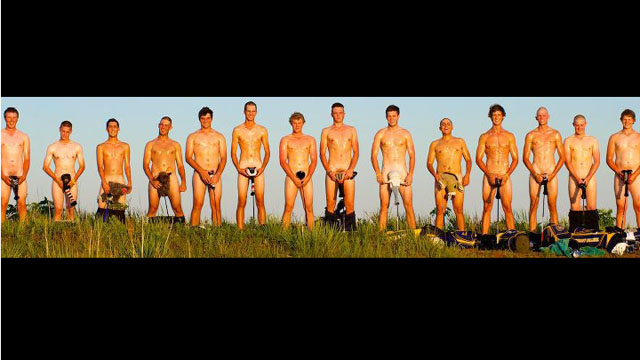 The team captain told the press that the team is appealing the suspension, mentioning “It was only intended as a bit of fun with the lads. We all have our shirts off, our shorts to ankles and we are holding golf clubs in front covering up our um, male parts.”