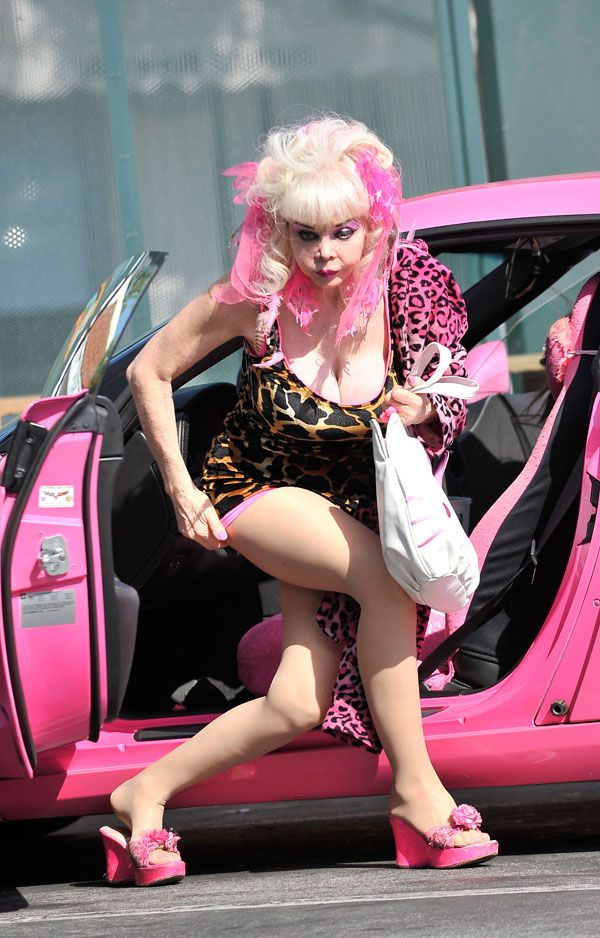 I had an Angelyne sighting the other day.  I witnessed the OG Hollywood Billboard Queen doing her usual deal, which consists of luring a bunch of Weho Queens to the back of her Barbie pink corvette, offering them a free Angelene postcard or sticker and then she works her pink glitter magic to get them to buy one of her personalized t-shirts for $18.00 a pop.  I can never EVER decide if this stint is brilliant self-marketing, a look towards the future of retail or just a sad and desperate woman’s means to make a living.

I can never EVER decide what to think of this illusive creature that is Angelyne.  Some say she’s a whore.  Others call her a pimp in pink.  Some say she’s a joke.  Others call her the original street artists who plastered her name and big tits all over Hollywood, way before Banksi could pick up a crayon.  I know she plays dumb, but is she?  I hear she’s nice.  Then I hear she’s mean.  Word has it she’ll either smile and wave, or she’ll throw water in your face, depending on whether you have a camera in your hand.  People either say they love her, or say they can’t believe she’s still around.  I guess some people hate her.  Not sure what she does for a living, but she’s not homeless.  Her stockings are tranny-tight and there isn’t a nick, scratch or scuff in her super clean Corvette.  I guess she’s Barbie meets blow-up sex doll, meets tranny shack (not chic), meets Monsterella Barbarella and she’s neither an actress, nor model, nor celebrity, and yet people can’t help but light up and say, “Oh look…there’s Angelyne,” whenever she drives by in her pink corvette. “How Neat.” 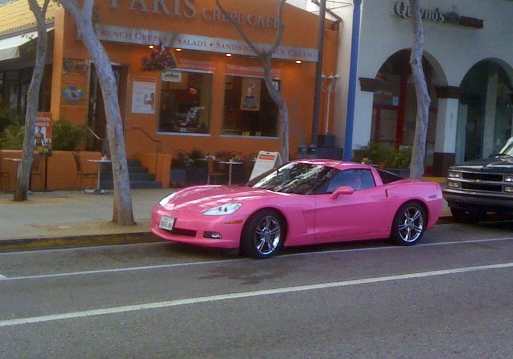 I actually own a sticker that reads “I heart Angelyne.”  My friend found it at the porn convention that hit Los Angeles this past spring.  The sticker asks for a $20.00 donation to join her fan club.  Funds can be mailed to some address that I don’t believe exists anymore somewhere in Hollywood.  I keep the sticker but I can’t say that I’m all hearts over her.  I get the big boobs.  I get a kick out of her Betty Boop Voice.  And like it or not, she was (maybe still is) a Hollywood symbol with the big hair and the sliced and diced face.  The bimbo on a billboard cartoon aside, she strikes me as very self-serving human being from the little that we know about her.  Seriously, who is she?  What did she do, or who did she screw to get her big tits on a bunch of billboards 20 years ago?  I will say this for her though…it takes a great amount of insanity–or I should say, perseverance to get up every morning, splash, and paste and sprinkle and powder some of the most garish shades of pink on your face–I’m talkin’ about a face that has collapsed harder than an Indiana State Fair Stage–and then step out into the glare of a crowd that’s never really there. And she still manages to somehow remain a mystery. 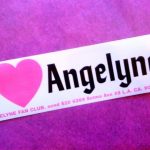 I don’t know if it’s the hot pink getup or the Barbie hot wheels, but The Queen Community can’t get enough of her.  They’ll sneak a picture whenever they can and they love to rip her to shreds the moment she drives off.  She’s clearly well aware of her gay appeal, cuz you’ll catch her hitting up a bunch of gay pockets in West Hollywood and Silverlake (she’s always at The Faultline) selling and bartering a bunch of outdated merchandise to a crowd that will post their Angelyne encounters all over Facebook—and the t-shirts sell, which goes to show that eccentricity pays. 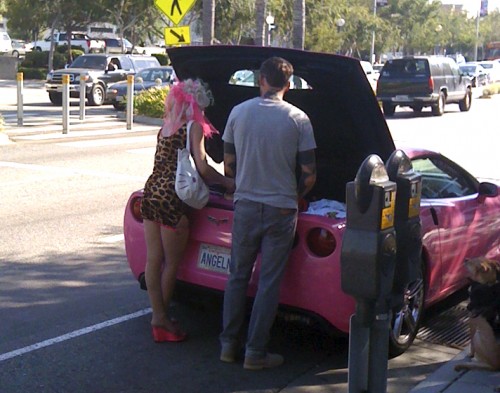 Wanna know what I find the most interesting about the Angelyne mystique?  If some dark-skinned Mexican amigo parked his car in front of Coffee Bean & Tea Leaf–SMACK in the center of West Hollywood and started selling t-shirts from the trunk of his car, what do you think would happen to the poor foolio?  His brown ass would face a hefty fine and then be driven out of the city faster than you can say, “You can’t sell t-shirts on the street without a business license, you damn beaner.”  — However that’s not the case for our Angelyne.  Whatever she did to get her tits on a bunch of billboards 20 or so years ago is still working small wonders for her today. 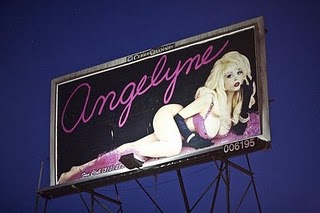 She’s Angelyne.  God bless her.  I guess in a weird way you gotta heart her.  I say keep ’em guessing you crazy bitch.