THE DJ MADE ME DO IT ALL NIGHT LONG 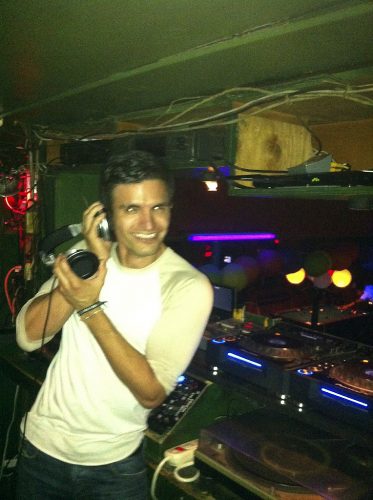 I hate that it made me so damn happy to be allowed into the DJ booth of the Motherload—err, I mean “Lode” while my friend DJ Quinn Callicott did his DJ gig spittin’ music and feeding all shades of video montages to a crowd that Sunday night.

I decided to tag along with my good friend Steve A while he fetched a Starbucks Cappuccino for Quinn, his boyfriend of some years, while Q worked the DJ booth till the late hours.  Steve is not originally from Weho.  He had never been to Motherlode and I had not been in years, on account of I’m not a bar whore (anymore), so I figured this was a good time to break it down for him about what Weho was like, what happened and what it’s like now, starting with Sunday afternoons at Motherlode for their Beer Bust dollar draft beer event.  It’s hard to believe it used to get so jammed-packed, that a line snaked down Santa Monica Blvd—yeah, The draft beer gave you the worst hangover headache and the beer goggles were awful–however, if you lived it, you can never forget the oh-so-very-hey-days of Mamas—as we liked to call The Load—waayyy back when The Abbey was making some mild mullah selling coffee, cakes and tea.

It was Sunday night, so the Santa Monica strip was a little tragic.  And by tragedy I’m referring to the weekend leftovers trying to squeeze the last martini drop out of a sticky glass before surrendering to the fact that the weekend was over, a shitload of money had been spent and their empty pockets will soon resemble the vacant bed that awaits after a weekend of clubbing, bar hopping and looking kewt—oh how I miss the good ol’ days!!!

“Why does it smell like ass in this area?”  Steve asked with disgust when we walked past Here Lounge.

“That’s not ass,” I responded.  “The smell is straight up vomit.”

“Haahhh…” Steve looked around with a pinched nose.

Steve and I entered Mamas.  It was a familiar scene with some familiar (puffy) faces.  Men clutched a beer around the pool table while others lurked in the corners.  I thought we were going to drop off the caffeine drink and hang out on the floor while Quinn did his DJ gig, but Steve climbed the ladder leading to the DJ booth and I followed without actually being invited in…

For all my wild behavior and street smarts around the bar/club culture, I was never much of a DJ fucker.  I know queens who know their DJs by name, what kind of music they play and where they are playing it.  They follow these DJs like a bunch of groupie-bitches in heat.  I sucked at doing my DJ homework, so the music I got was always a hit or miss. Of course I kissed up to promoters, door guys and bartenders for obvious reasons, but the man in the DJ booth was an illusive figure to me, which is odd because it didn’t matter if the drinks were strong and the boys were cheap, it always boiled down to the music for me.  I fucking loved to dance until it felt like my back would crack in half.  In retrospect, it was house music that did me in; especially when I needed a boost of energy to dance all night long. Yup, I blame the DJ.

I’m familiar with names like DJ Quinn (duh), Eddie X, Kimberly S, and Brett Hendrichson.  And of course, there’s DJ Paulo—I don’t know the man, but I used to call Shorty’s Barber Shop for a hair appointment and the queen on the other end would be like, “Are you the DJ or the trashy writer,” after I gave him my name.  Then the bitch would be like, “Gurl, when you wrote that column about the guy’s asshole being the size of a raspberry Bundt cake, I wanted to puke—that was just fowl.” 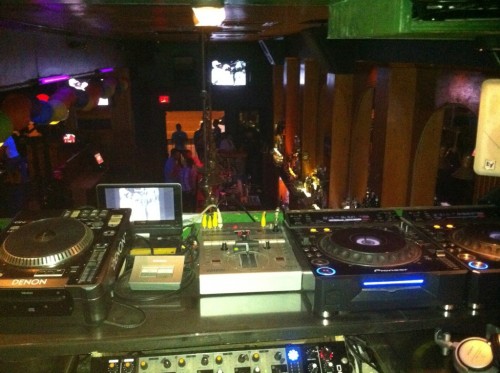 The DJ booth at Mamas is pretty much a crawl space with very low ceilings and enough room for three to four people.  The small window from that crawl space gives a surprisingly open view to most of the shenanigans on the Motherlode floor.  Had I known that my bad behavior could be witnessed from a man spinning records—err, I mean CDs—out of this little booth, I probably wouldn’t have ended so many weekends plastered against a wall with some random fuck sucking on my neck.

Quinn gave us a little tour while we stood in place.  He showed us the stacks of CD booklets full of disco, pop, funk, punk, classic dance and straight up house.  He even let us make requests on the condition that we didn’t ask him to play anymore Lady Gaga, Britney or Madonna.  No Madonna!?  I let Steve make the selections. 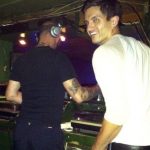 I asked Quinn if he ever worried about future technology making a DJ obsolete.  He shook his head confidently and said something along the lines of how music and styles may change, but you’ll always need a living person to look at the room, get a vibe from the crowd and play the right music according to the mood. I guess a bar/club without a DJ turns into a bar/club with a playlist from an IPod or a jukebox. 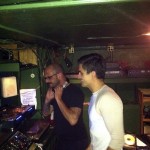 I left Steve to keep Quinn company and walked home from Motherlode…alone…ironically, not too differently from the crazy years, only this time my wallet hadn’t been gauged out, I didn’t feel empty handed and I didn’t turn into Miss Regretta Jones when the clock struck past my bedtime.

Thanks for letting me hang out Quinn!!!

DJ Quinn C plays parties and events in the greater Los Angeles area, San Francisco, Palm Springs, San Diego, Santa Barbara and everywhere else in between.  His monthly podcast will kick your ass.  And it’s downloadable for free at his website djquinnc.podomatic.com.

And remember to pay your respects to Mamas! 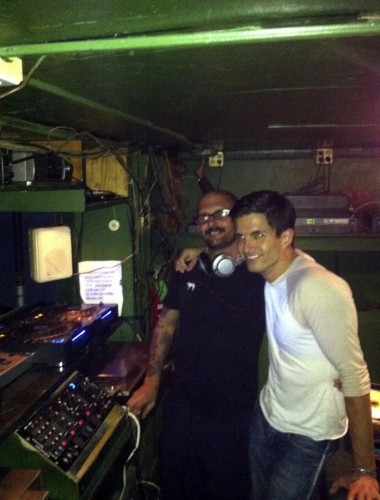