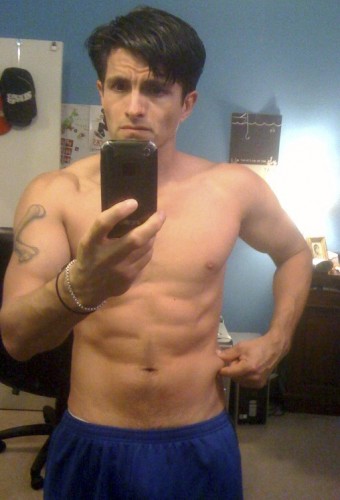 MY BRIEF BOUT WITH BULIMIA NERVOSA

We ate way too much puto that night.  And by puto I’m talkin’ about this Filipino dish that is actually called puto bumbong, which kinda looks like a mini buttery taquito, only it’s more like a baked sweet sort of treat.  I don’t know what’s in it other than rice and some weird food coloring, but it tasted good (“tastes like chicken”).

I don’t remember where the party was, what we were doing there, or for whom we were showing up for, but I do remember dipping into a platter full of puto.  It was being served as an hors d’oeuvre, so it was the smallest bite on a table that was overflowing with all sorts of international dishes—“Eeeww, I don’t know what that is over there, but I don’t like it.”

I was with my friend Terrence, who I liked to call Taffy, or Taffy Teresa Tafka to get on his nerves.  Taffy and I decided we were getting fat in our size 28 jeans, even though we were some of those annoying skinny bitches that could eat whatever we wanted without gaining an ounce.  I remember being obsessed with what we put into our bodies—over the years I’ve learned that there are worse things than growing old, or growing in jean size, but back then there could be nothing more terrifying than walking around with what we called “the big look.”  We counted calories and we joked endlessly about adopting an eating disorder to get some attention.

We had lengthy discussions about the pros and cons of Anorexia Nervosa vs Bulimia.  On the one hand it made sense not to eat if you wanted to remain small, but it sucks being anorexic when you like food.  And being small was one thing, but being sucked-up and super skinny was NOT the look we were going for, cuz let’s face it, the sucked-up-skinny-sickly look doesn’t go over too well in the gay community nowadays.  We also understood all too well that people who don’t eat always come at you like flame-breathing dragons with their breath stinking like a pile of rotting intestines.

We were left with Bulimia Nervosa.  It seemed like a good idea because you got the joys of eating, followed by the discomfort of purging.  It would be a matter of checks and balances.  It gave one a sense of control.  Come on in.  And then out you go.  Unfortunately I met a guy who liked to puke after eating.  His breath always had a distinct smell of diarrhea.  I was not going out like that. 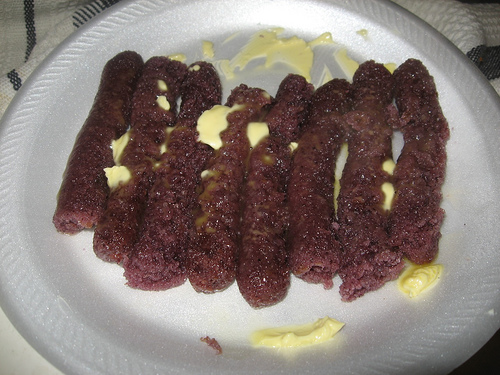 The rice in the puto must’ve expanded in our flat bellies, because we suddenly felt very bloated.  I don’t remember whose idea it was to force that puto out of our bodies–it was more like a dare–but before we knew it, Taffy and I locked ourselves inside a bathroom.  He dropped to his knees before the toilet.  I bowed my head over the bathtub.  Making yourself vomit and trying to make it look cute is just not possible people.  I remember hearing Taffy retch, but nothing came out.  I jammed my finger down my own throat and wiggled it around, but I’m embarrassed to mention that we both had pretty strong gag reflexes (blush).  Then I saw Taffy’s body convulse from the corner of my eye and I heard the puto make a splashing sound inside the shit bowl.  I’m not sure if it was the sound or the smell of the barely digested puto shooting out of little Taffy’s body that made my ribcage expand and out came chunks of slimy globs that should be to coming out from another side of me.  My barfing made him barf harder.  And it turned into quite the puke fest.  We both had beads of sweat on our foreheads, tears running down our cheeks and drool rolling down to our chins.  You had two putos puking puto inside some stranger’s bathroom.  HOW DO PEOPLE DO THIS!? 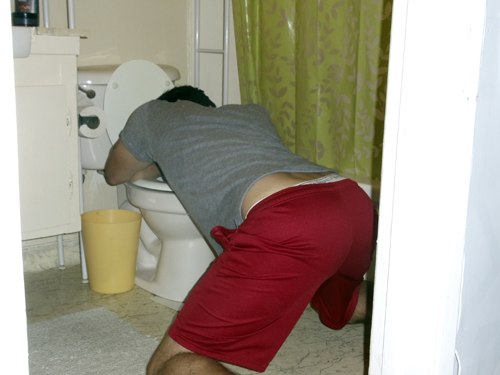 The next day my entire neck ached.  My throat was scratchy and sore.  Is this what happens when you jam your finger down your throat and force your body to cough it up?  Taffy called me to complain that his neck hurt also.  We both found this funny for some reason.  Man, we’ll never make it in this town, if don’t learn how to puke the proper way, we said.  We did learn a valuable lesson, let me tell you.  We vowed NEVER to eat puto again.