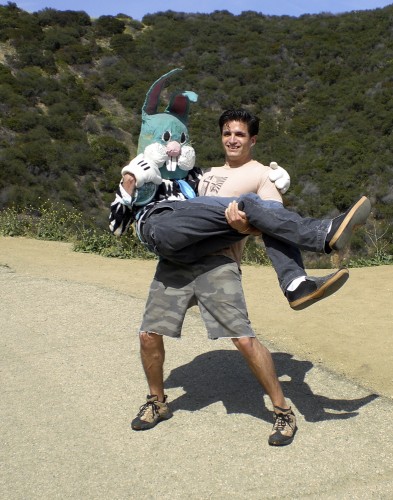 It was supposed to be a random act of kindness that turned out to be way too random for some of my fellow over-it, if-you’re-there-who-cares Los Angelinos.

My friend (we’ll call him Hun Bun) decided to dress up as the Easter Bunny for the Day of JC’s Resurrection.  The plan was to run around all over town and force a smile out the most jaded Los Angeles transplants that California has to offer on Easter Sunday, cuz nobody can resist a cute and cuddly bunny—however, last minute planning left Hun Bun with a limited supply of bunny costumes.  The  furry getups were either sold out, or cost way too much for an Easter gag.  He had to settle for a sad bunny head that was made out of paper mache’.  The head had mold growing out of the side of the cheeks like a rotting pinata.  It was more Frank, the creepy doom and gloom rabbit from Donnie Darko film than a cute Cadbury Easter Bunny, but who gives a shit?  The result was still funny–if not a little twisted.

He dug into the dorkiest clothes he could find in his closet (he didn’t have to dig too deep let-me-just-tell-you) and came up with something colorful and festive.  A giant Easter egg and a pair of authentic Goofy gloves were a finishing touch.  The gloves are a souvenir from a previous stint he did as Goofy at Disney World in Orlando Florida (he also played Captain Hook and Beast of Beauty and the Beast, but Goofy was his big number).  Disney has this rule where they burn the gloves after a person resigns from Disney Inc, but Hun Bun saved the gloves from the fire somehow.  We’re not allowed to talk about it. 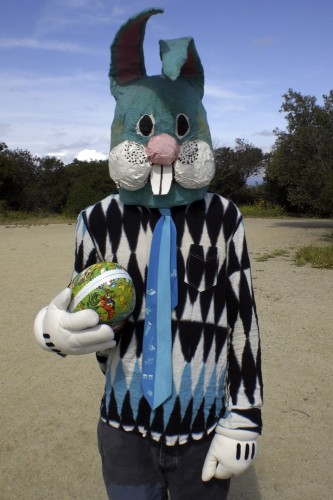 I would be the equivalent of what they call a “lead” in a Disney theme park.  A lead is a handler of sorts who stands by and protects a Disney character from being sexually fondled by pervs trying to be cute, or being punched around by mean-spirited bastard children.  Leads also protect bratty kids from being smacked by a short tempered Mini Mouse suffering from heat exhaustion.  Leads keep the time to make sure the rotation of Micky Mouses do not overlap, cuz nothing breaks the Disney magic like having two Mickies standing on opposite corners of Main Street—did you know that what you see isn’t always what you get when it comes to the sex inside a Disney character?  Height determines whether you’ll be playing a boy or a girl, so a lot of of times you get a some eggs in a basket under a polka-dotted skirt.  It explains why Mini sometimes hops around with some killer calves.  My friend qualified to be The Queen of Hearts from Alice in Wonderland, because he’s tall, but alas, her name was never added to the list of characters on his resume’. 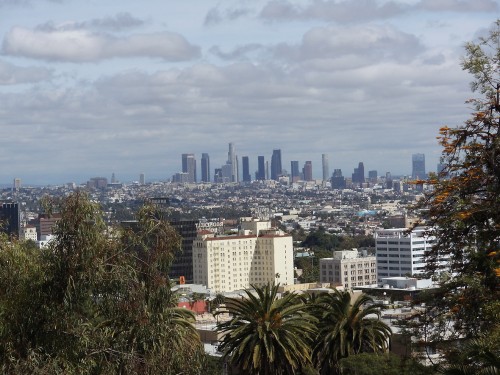 It was a beautiful day in Los Angeles–not too hot, not too cold–so we decided to do the Runyon Canyon hike.  Hunny Bunny is a professional.  He could handle the hike in a costume.  We brought his dog Henry the Dog with us as an added accessory.  Runyon Canyon was blazing with all kinds of people—“Look at the Easter Bunny,” I woman shouted the instant the rabbit head was in place.  A little girl looked over at us from across the street,  She scanned Hun Bun up and down, she wrinkled her nose and said in a haughty tone, “That’s not the REAL Easter Bunny.”  Hun Bun did a little fancy foot work for the snooty little brat and she seemed to walk away somewhat satisfied.

I had butterflies in my stomach when we started the hike.  It occurred to me that we could be minutes away from disaster.   Dogs running around without a leash at Runyon Canyon.  Large dogs with big snouts.  Hun Bun was either gonna get mauled by a pack of k-9s not liking the sight of a creepy looking rabbit doing a goofy dance.  He was gonna walk straight over a steep ravine and plunge to his death.  Or he was gonna get stoned to death by a mob of angry hikers trying to put him out of his misery, like they did in the old JC dayz.  Hill-arious….needless to say, I made a lousy lead.  He kept tripping over rocks and potholes.  I didn’t know whether to keep a safe distance or tie him to a leash to protect him. 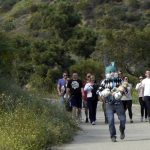 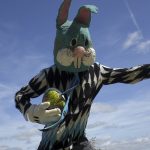 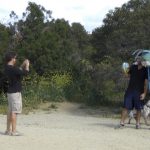 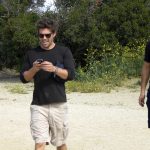 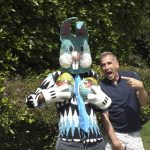 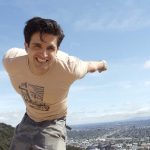 It was a very LA moment to be doing a hike with a random guy dressed up as an Easter Bunny–kind of like a David Lynch movie.  People never saw him coming.  Some humorless folks couldn’t be bothered, walking past him with pursed lips, too busy striving for perfection while running downhill.  But the majority could not help from cracking a smile and doing a shy wave as Hun Bun hopped past them.  Some guys tried to hi-five him and miss, cuz he couldn’t see.  Women and some real cuties wanted a picture with him.  I beamed with pride when the reaction was good.  Then I cringed and cowered with embarrassment when people looked annoyed by an overgrown rabbit getting in the way of their endorphin fix.  For the most part people were happy.  The only dog that had a problem with the Rabbit, was Henry the Dog.  He kept getting disoriented, looking for his master underneath the rabbit head.  He would run ahead of us in a panic, or lag behind looking for his master, while his master hammed it up for the cameras.  The bunny looked like it had been ridden hard and put away wet, but it could not have planned more perfectly.

A little boy in a Gilligan’s bucket hat with Cherub cheeks beamed when he looked up at the floppy bunny ears. “Bugs Bunny!”  The little boy screamed from his stroller.  Then he pointed and yelled, “Kill the wabbit!”  It was a delight to the grownups that overheard him (kids say the darndest things).  “Thank you for doing this,” the boy’s father spoke into one of the eye-sockets.

That’s how it went down in a city that can be shitty with no kind of pity.

I was happy to stand by the sidelines and witness a little random evidence of good.  The evidence is all around us.  You just have to look for it.