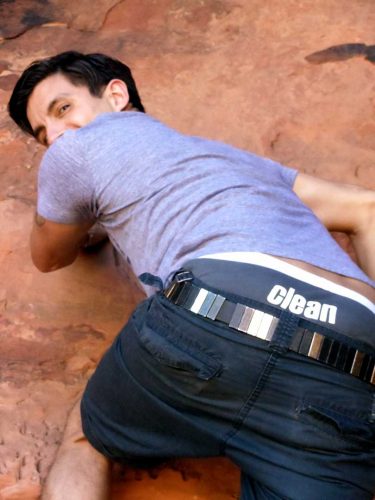 I recently took a little mini road trip to The Promised Land of St. George Utah—aka “Utah’s Dixie” on account of they used to pick cotton back in the Pioneering dayz.

I’d never been northeast of the Vegas Nevada border before.  My boyfriend comes from them there salty desert parts, so I figured I could meet some of his fam, get some good hiking over some pretty red rock scenery and maybe visit some of the local Polygamist compounds and get some kewt pics of the Plyggies in their natural habitat doing whatever it is that they do when they’re not out shopping at the local Walmart.  I imagine the Plyggie women take some time off from birthing babies to French-braid each other’s hair and stitch together some of those frumpy dresses, like the ones that Chloe Sevigny wore in HBO’s Big Love—seriously, those outfits look like they were made out of a pair sheets with a very pathetic-thread count.  I hear the Plyggie men are more illusive because the wives outnumber them.  I also hear they lurk about town keeping a sharp eye out for any runners, which is what they call the women that gather their skirts and make a mad dash to some kind of freedom (I felt bad for the runners).

There is something so peaceful, if not lazy about the dry dessert air of St. George with its population of over 17,718 (thank you Wikipedia).  The hike up some of the Jurassic red and orange Navajo sandstone was phenomenal.  The colors of all the different rock formations varied from chocolate reds, yellows, greens, to purple and even white.  A lot of the open range looked straight out of those super old John Wayne westerns where they clearly painted my Mexican peeps with war paint and put a feather on their heads to pass them off for Indian savages…which is like…so funny.

The hike was no Hollywood Runyon Canyon in terms of shirtless hotties running up and down with their packages bouncing up and down like lumpy sacks of potatoes.  Oh but no, I witnessed way too many grandpas wearing super tight spandex bike shorts with the built-in seat padding all worn out and pushed towards the crotch area giving the illusion of a super stuffed soft taco.  It made me want to put some sand in my eyes—it was so foul—come to think of it, I didn’t see too many cute guys on the trip.  There was something very generic and non-descript about the men in this town.  I saw one cute guy downtown.  He was pale with jet-black hair and pale-blue eyes.  He also had a nice body, which automatically makes him gay in my book.  The women, on the other hand, were gorgeous by the majority. 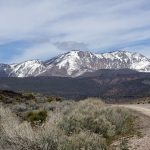 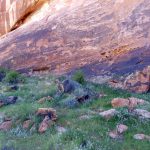 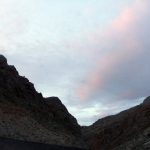 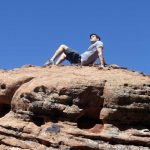 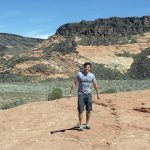 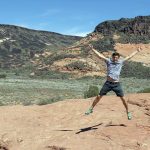 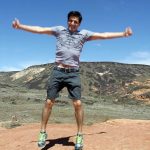 The St. George Temple is supposed to be super old school, but I didn’t get to see it on this trip, which is just as well.  Those Disney-like castles always make me reflect on my friend Mormon Joe and his circle of Ex-Mormon gays.  I used to run around with what I used to call my herd of Mormon nerds.  They were the excommunicated—some of who used to lash out at the Mormon Church’s anti gay policies, while at the same time yearning for the softness of the same heel that kicked them to the curb and cast them out do be damned for eternity.  I can’t imagine what it must be like to possess some sort of map that leads to the Keys of the Kingdom and then to have that map snatched and ripped to shreds because you were born a certain way.

I remember meeting up with Mormon Joe and a bunch of his Mormon gays in D.C waaayy back when.  I was there to write about pride at the Nation’s Capital.  For days, all I heard from the Mormon nerd herd was how much they hate The Church because The Church hates them for being gay.  HOWEVER, there was a pregnant pause and mouths went agape when I stepped outside wearing one of those Temple Garments aka Mormon Underwear for the Pride festival (I found it on Ebay).  The white t-shirt is made of thin—almost see-through material with a swooping neckline and funny symbols over the nipples and on the belly button.  I of course, had to have it altered to make it fit tighter around my torso.  The ex-Morms were horrified, taking a few steps back as if lightning would strike me dead at any moment.  One of the Morms looked at me with total disgust.  “You are awful,” He said. Then he added,  “I wish I had the balls to do that.”—My lil’ Temple Garment got a lot of mileage at other events.  Then one day I accidentally burned it with my iron.  IT BURNED!!!  Was it a message from heaven, a signal from hell?  Who can tell?

So where was I?  Oh yes, St George: The highlight was on the second day: We were gonna go Plyggie hunting at the local Dairy Queen, but we got lucky; the Plyggies came to us while we ate at Café Rio—a Mexican restaurant full of white folks that could not stop staring at me while I self-consciously nibbled on a big ass wet burrito—“Dang look at that Mexican. He loves him some burrito.  Look at him go…”—Three little Plyggies walked into the restaurant side by side.  I did my best to sneak a picture.  One of them had a bump, which was such a cliché.  They always walk in pairs, or threes and they never talk to anybody outside of their group.  Their shoes mean something and they wear nylons for some reason or other.  Also the height of their bangs is a symbol of their social class (or so I was told…I’m too lazy to look it up on Wikipedia).  I wanted to grab the youngest one by the arm and scream, “RUNNNN!!!”

Anyway, it was a short but sweet trip.  I will definitely go back.  And I ain’t just whistlin” Dixie!