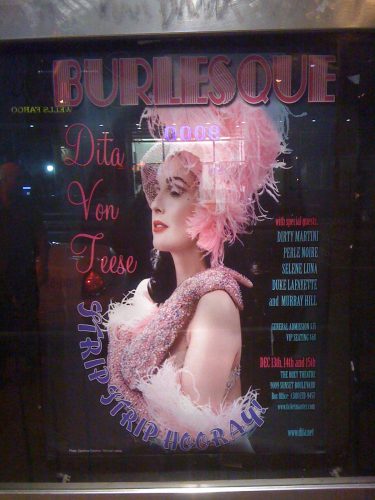 I had my first a taste of a REAL old school strip tease burlesque show last night with the world famous Dita Von Teese headlining her Strip, Strip Hurray Show at The Roxy Theatre on Sunset Blvd.  Truth is I was mostly there to catch my bitch  Selene Luna take it off for the Roxy crowd (Selene: aka, The Pocket Venus amongst common folks).

My friend Groucho (he demanded that I change his name for this here blog, but he has no say over what the name gets changed to) loves Dita and he especially loves La Pocket Venus after he witnessed her stepping out of a baby carriage and do an oh-so wrong number where she striped right down to her lacy baby-inspired panties—that being stated, of course we got there super early, because the Roxy is kind of a shit venue and it’s a first come first serve type of gig.—I like to annoy Groucho and point out how Dita Von Teese stole the Dita name from Madonna’s “My Name is Dita”, Erotica/Sex Book incarnation.  Of course, I leave out the part where Madonna stole the Dita name from 1920s/30s German actress Dita Parlo.

SOOoo…we picked up our tickets at will-call and this trucked-up bitch who was trying to channel Betty Page, but leaned more towards a gray complected Amy Winehouse, welcomed us and ushered us upstairs–“Come inside.  Get out of the cold.  Get a drink,” she told us with a scratchy smoker’s voice.

We went upstairs.  We purchased some drinks.  The upstairs area of the Roxy is small, dark and a bit of a dive.  I  immediately thought about all the famous people that have puked at this puke palace.   Women were dressed in vintage pinup drag and everyone seemed excited to see Dita—the excitement was short lived.  While we were upstairs spending money on the joint, a long ass line was forming outside.  The same gray bitch that ushered us upstairs for drinks did not hesitate to usher us to the very far back of the line, which snaked down the block.  It was a real jip.  Clearly the early bird doesn’t always get the worm, and the early bird doesn’t get first dibs to a Dita show apparently.

According to the ticket, the doors were supposed to open at 11pm (the shows were sold out, we could only do the late show).  We stood in the cold until 11:45pm and the show didn’t start till somewhere close to 12:30pm, which is so damn typical for shows like this at these sort of venues.  To make matters worse, there was a semi-cute-ish straight guy standing in front of me with the biggest zit bursting out of his shiny forehead.  It was like a fucking horn.  I found it disturbing and distracting.  I fought the urge to grab him in a headlock and just…SQUEEZE!!!

The zit and all other grievances in between were quickly forgiven and forgotten when Dita stepped on stage.  The show was TIGHT.  The colors made me happy.  It was sparkly and pretty and sensual, while she cooed and taunted and took it all off.  She has beautiful white porcelain skin and she’s very detail oriented, but her smile seemed a little insincere and there were traces of boredom dripping from her pouting lips, but keep in mind that this was a late show.  Then she mounted a shiny carousel horse.   I expected her to do her rendition of Like a Virgin ala “Confessions Tour 2006”, but there was no such thing.  She didn’t say one word.  It was on the next act. 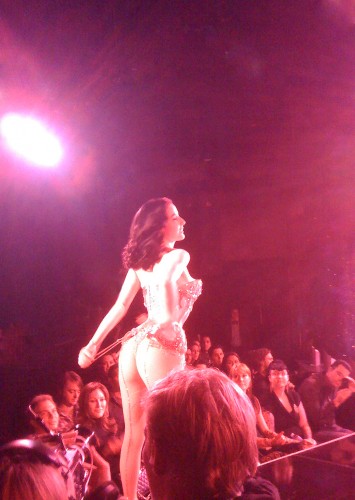 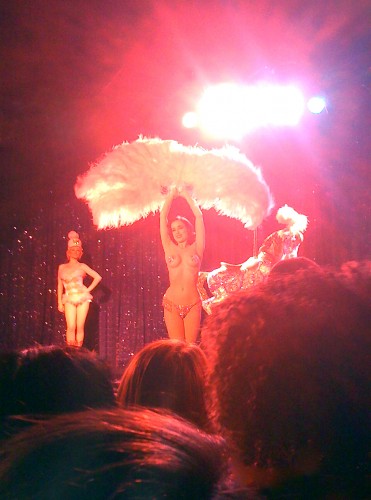 A man named Murray Hill hosted the show.  His high pitched voice kind of reminded me of Joe Pesci in Good Fellas—I later learned that Marray was more like a Myrna underneath his/her suit.  Drag kings can be tricky.  The woman that followed Dita was voluptuous.  She did this number where hands came out of a spider web and undressed her.  Then there was a flat chested Russian gal who did the dominatrix bit.  I thought it might be a boy in a dress.  I anticipated the print of a third leg bulging out of her silk panties when she took off her dress, but nope…it was clearly a muffing, not a baguette (sad face).

I’m guessing the fourth act was meant for the ladies.  Some skinny pasty man who looked more like a queen than a casablanca did what has been dubbed as a “boylesque” number.  He goes by the name of Duke Lafayette.  I guess he’s famous for kissing, sucking and pretend-fucking a busted mannequin leg.  There was no kind of ass, or cock on this man, just a tiny hairless boy bump inside a pair of cheesy bikini underwear.  He reminded me of one of those silly fashion queens that can’t get laid to save the planet in Weho, but I hear he perps that he’s all hetero male, which is pretty laughable.  I know strippers love to make their paper, via gratuity for displaying their goods, but in Lafayette’s case, I wanted a partial refund for being forced to stand through such nonsense (when tipping a stripper, one must take a dollar’s worth of self-esteem.  I usually enter through the ball-sackage area and work my way up to see if they’re ticklish.  It’s also good to run your hand up the inner thigh, stop at the crack and ring the doorbell with your thumb.  They LOVE it!) 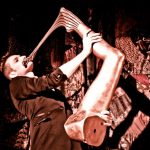 I was pissed off that I could not see much of Selene on account of she’s small, which means she was at the eye level of the standing audience.  The setup of the stage sucked.   From the glimpses I got, she did an homage to potheads everywhere with a feathery fan that was shaped like a marijuana leaf.  She held a joint the size of her arm, which she sucked and huffed and puffed at the audience.  The crowd went crazy for Selene (I pointed this out to her when I saw her at the gym the next day, emphasizing on how shocked I was that people loved her so much…just to keep her in check).  I love me some Pocket Venus. 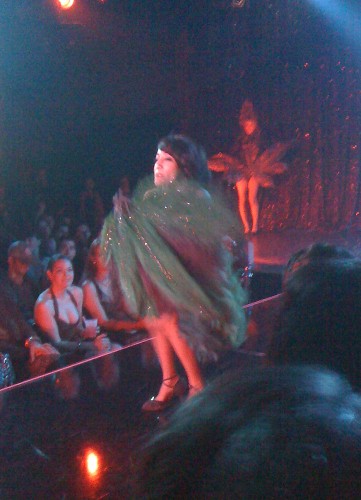 We were reminded that this is a Dita Von Teese show when she came back out on stage to give the crowd a second taste.  This time she splashed around and took a shower before an awestruck audience.  Again.  Shit venue. She was on the floor.  You couldn’t see a thing.  Moving along.

Then wouldn’t you know it…Lafayette came back out with his flat ass and broken mannequin leg.  It was close to 1:30am by then.  Putting that bitch up on stage for a second time felt like they were asking us to leave.  So we left.  I hear the number that followed the “Duke” kicked some serious ass.  It was some wild Josephine Baker deal with a banana skirt and jungle moves.  We also missed Dita’s grand finale where she rode a mechanical bull ala Madonna “Don’t Tell Me” from her “Music” moment.

The production  itself was definitely a bang for my buck–Lafayette and all the other bullshit aside.  I would do it again in a heartbeat.  Dita is no Madonna, but she definitely stands in a class of her own, doing her own thing and making it look effortless in the process.  Like the big M, they don’t make them like Dita anymore—Strip, strip, HOORAY!  Indeed. 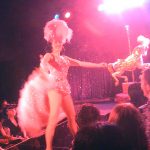 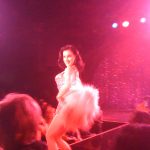 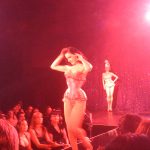 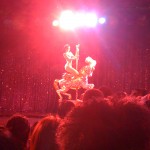