GWEN STEFANI BY THE MY 12 STEP STORE 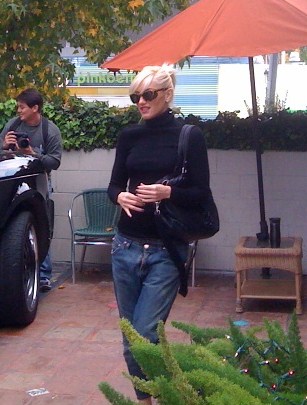 I actually posted that Gwen Stefani was “standing in front‘ of the My 12 Step Store” on my FB wall, cuz that’s where I saw her standing, more or less.

I knew she had just gotten her nails did at the ghettofied nail shop next door to the Got 12 Store, but where’s the fun in a bunch of Vietnamese women doing French manicures?  Some people trip out by the concept of a 12 Step/recovery/discovery/gift store…sooo I went there. No harm done.  It’s not like I was lying.  The pictures prove that like, um, yeah, Gwen Stefani was standing in front of the My 12 Step Store.  Period.

Of course, some lamos in recovery were way too quick to smack me on the hand and slam me for supposedly breaking Gwen’s anonymity, even though a) the woman is not in recovery to my knowledge, b) I never mentioned those first two letters in the alphabet, c) I never said she was IN the store, d) the place is a gift store and NOT some twelve step meeting, and e) shopping at a recovery store does NOT make you guilty by association.  Anybody can shop at a My 12 Step Store, unless I missed something in the Big Book.

Guys came on my FB wall screaming for anonymity.  I was called lame.  Another guy with the initials MB contacted me privately to inform me that he was deleting me from his friend’s list for obvious reason.  He said, he took the principles of anonymity to heart and I clearly had no respect for people’s privacy.  It was nothing personal, he added, of course.

Before I go on, let me make it clear that I’m not much of a star gazer.  I see celebrities all the time and find it so uncouth to bug famous people on their days off from celebritydom.  And besides…asking for an autograph goes against my jaded-over-it-I’m-from-L.A.-bitch, stance.  Although my friend Josh and I did scream like little girls when we caught Paris Hilton on Robertson Blvd one day, but we were just fucking with her…because…she’s Paris Hilton (she just smiled at us like we were retarded).

Of course there are few exceptions.  I would DIE if I saw Madonna, like I’d be dead if I saw Michael Jackson’s ghost.  And I admit that Gwen is a pretty big deal on account of her angel, love, music, baby combo. It’s the only thing that prompted me to stand in the midst of a hungry crowd of paparazzos in front of The My 12 Step Store to wait for her to appear. 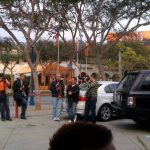 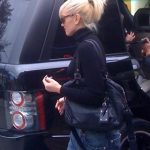 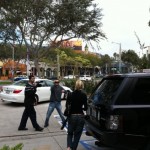 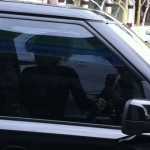 I gave my IPhone to my friend Jared and I snatched my friend Mike’s G4, cuz he was too shaky to take a decent picture.  When she finally stepped out of the shop, the moment was very anti-climactic in terms of it was just an attractive woman getting her nails did with her son in tow.  However, the paparazzi made the whole thing otherworldly.  They elbowed and screamed and ran and snapped away like they had just seen Michael Jackson’s ghost.  She hopped in her SUV and drove off.  There was no holler back gurls.   See, this is why I’m so dead inside towards celebrities.

Anyway, back to anonymity…some people can be so dumb.  Saying you’re sober and saying you’re a member of a certain 12 step program is not the same thing people.  There is lifestyle and membership.  Many are clean and sober without ever working a step, or being part of a program.  Why hold them accountable for anonymity?  And being sober isn’t what it used to be in the 1930s.  I get that anonymity was a necessity for your very survival back when men only wore black and white suits, but social networks like Facebook make it nearly impossible to keep a sober status under wraps.

The way I see it, if the Hello Kitty Club doesn’t want me to walk around talkin’ about how I’m a Hello Kitty Club member because I may misrepresent Hello Kitty, then I can respect and refrain from claiming that I am part of the HK.  To do otherwise would make me an asshole.   However, it doesn’t mean that I can’t talk about my love for cute white kitties, or how pink bows make me a better person.  Know what I mean?  No? You’re dumb.  Nothing personal, of course.

Let’s get real; for a spiritual program that’s based on attraction, rather than promotion, and it’s all about progress, rather than perfection, certain people can get all kerazy pissy when they feel others aren’t doing it the way they feel it should be done.  They get the publicity of ones sober lifestyle so twisted with “I’m a member of BLEEP” all the time.  Their sober panties get pinched.  It makes them angry.  They call you lame on a public forum.   And they commit the biggest diss a person can make in 2010: they delete you from their Facebook friends list.  SNAP!  Take THAT!!!  It’s so annoying.

Anyway, I could go on and on, but I gotz to get my ass to a meeting—in closing, I say fuck perfection.  Show me some progress.

PS: You can buy cute sober undies like the ones below at my12stepstore.com I’m wearing my mine right now.  Cuz I’m sober bitches! 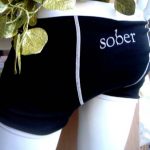