Below is a Halloween column I wrote a whole ten years ago (gulp).   I can’t fucking believe it’s been that long.  It may be a little too cunty for your taste buds, but I don’t care.  I still find it kind of fun after all these years. 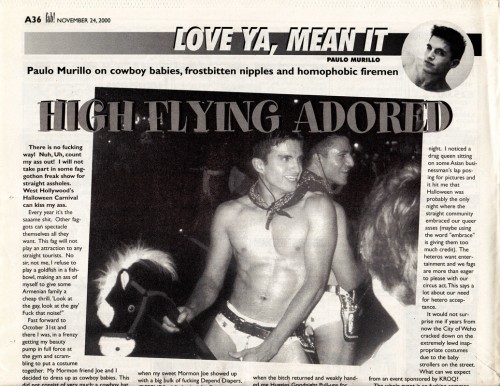 “There is no fucking way!  Nuh, Uh, count my ass out!  I will not take part in some faggothon freak show for straight assholes.  West Hollywood’s Halloween Carnival can lick my ass.  Every year it’s the saaaame shit.  Other faggots can spectacle themselves all they want.  This fag will not play an attraction to any straight tourists.  No sir, not me.  I refuse to play a goldfish in a fishbowl, making an ass of myself to give some Armenian family a cheap thrill. ‘Look at the gay, look at the gay!’  Fuck that noise!”

Fast forward to October 30th and there I was, in a frenzy getting my beauty pump in full force at the gym and scrambling to put a costume together.  My Mormon friend Joe and I decided to dress up as cowboy babies, which  did not consist of very much: a cowboy hat, boots, holster, stick horsy and yes, a diaper…It was a simple, cute and sexy concept, however the preparations were a fucking nightmare.  The Mormon bitch had the small task of buying all the accessories, while I took care of the painful planing
and coordinating.  He found all the accessories except for the diaper, which is like the most important part of the costume—“I don’t
want to make a mistake.  There’s too much pressure,” he whined.  “Don’t fuck up and you’ll be fine,” I barked at him.

You can’t even imagine my devastation when my sweet Mormon Whore Joe showed up at my door with a big bulk of Depends Diapers.  DEPENDS!!!  I asked for Pampers, not Grampers!  I could kill some bitches, but there was no time for that.  We had to make do.  We slipped into an Ultra Depends.  And there is no being kind; we looked stupid.  I’m not sure if you’re familiar with Depends (evil grin), but  I felt like I was riding a fucking maxi pad sidesaddle–a thick pad at that.  We stood in front of the mirror looking at our lopsided Depends in total silence.  I immediately thought about that voice from the Carrie movie that goes, “They’re all gonna laugh at you.  They’re all gonna laugh at you…”  One of my balls popped out of the old man diaper to emphasize my unhappiness.

Needless to say I sent Mormon Ho Joe back to Save-Ons to find us a better diaper, only to smack my forehead in total frustration when the bitch weakly handed me Huggies Goodnights Pull-ups for grown boys (relax, relate, release…).  The show must go on, so we squeezed into our Pull-Ups.  Time was tight and so were the goddamn Pull-ups.   I desperately nipped, tucked and hiked to give my bony ass some kind of girth, while Joe’s big booty spilled out of the sides.  No matter, we had to make it work.

What is it about gay men and Halloween?  It’s like some weird gay chemical reaction that snaps in our brain at the end of every October.  Our hunger for attention is multiplied.  Fags love an excuse to strap on some stiletto heels and walk around half-naked.  The whole thing is so pathetic—OK, so like flash forward to Joe and me walking around the Carnival half-naked, demanding your attention while throwing a serious muscle tantrum with our stick horsy dragging between our legs.  Of course, the cowboy babies were a fucking HIT!  Who gave a shit that we were freezing our nipples off? We made quite the spectacle.  They loved us dammit!  It was sickening how we shamelessly posed for pictures.  It was one constant foreign, “Prease, I rearry rike yo costume, take pictah prease?”  There were several moments where the snapping of flashbulbs was nonstop.  I lost myself in the embrace of endless compliments.  I felt dizzy and warm all over.  This is what the shit’s all about.  We were high flying adored.  However, when the blinding flashbulbs dimmed, and my eyes adjusted to dark, I noticed baby strollers and straight couples pointing fingers, while holding hands.  I tried to ignore the reaction of some teenaged twat talkin’ about, “Eeeww!  Those faggots are nasty,” after we passed her by.  I was like, Fuck the cunt!  We looked hotter than her man did on his very best day.  That had to hurt.

It seems the invasion of straight lookie-loos in Weho’s Halloween Carnival grows every year, while the costumes only dwindle.  Let’s be honest here, more than half of these straight fucks would never be caught dead in Boy’s Town on any other night.  I noticed a drag queen sitting on some Asian businessman’s lap posing for pictures and it hit me that Halloween was probably the only night where the straight community embraces our queer asses (maybe using the word “embrace” is giving them too much credit).  The hetoros want entertainment and we fags are more than eager to please with our circus act.  I guess it says a lot about our need for hetero acceptance, and it  would not surprise me one bit if years from now the City of Weho cracked down on the extremely lewd, or offensive costumes, due to the baby strollers on the street.  What can we expect from an event sponsored by KROQ?  Eeeww!!!

Of course heteros invading our neck of the woods never means that we gays unite like one big happy family.  Joe and I were posing for pictures giving the crowd some major ass cleavage, when to much to my horror, I suddenly felt claws trying to rip my diaper off of my bare ass.  I turned to find a Latin drag queena fronting and trying to start shit by acting cute (to think it was one of my own Latin sistas. Ooh the ache, the sorrow)!  I tightly clamped on his/her wrist until he/she let go.  When he/she decided to keep stepping, I extended my stick horsy between his/her heels and the wet bitch ate shit (that’s wet as in back).  She tripped on my stick, and fell face first.  She almost took poor Ho Joe with him/her.  I pointed and laughed.  Others joined.  Trying to strip me of my diaper is like yanking a wig off a drag queen (that’s a no, no).  My tummy felt warm and fuzzy when the drag bitch limped away in pain (pity darrrlink…)

Anyway, Joe and I radiated, and got lost in our element, but alas the art of great showmanship is knowing when to step off to stage left.  As we walked back to my place, I noticed two fine young firemen standing in front of a fire-truck.  I asked if I could take a picture with them.  One of them backed away in in embarrassed disgust (Did I mention these were a real firemen?)  The other guy was a good sport and struck a pose with two naked men dressed as babies.  After the picture was taken, I sarcastically wiggled my fingers at the phobe. “Booh!” I taunted him.  “Gay cooties!”  He gave me that mean look that straight guys give when their manhood is being challenged (Damn rookie… I decided he wasn’t so cute after all…).

It was the fireman’s disgust that brought it home for me.  Fuck this shit.  I had fun, but I will not dress up next year.  I am sick of playing the Elephant Man for cheap thrills.  No more, I went on with my tangent, while trying not to think about the warmth of them flash-bulbs…  “Count my ass out.  There is no fucking way.  Forget it…”  And blah, blah, blah and so on—yeah, whatever, see you at the Carnival next year.