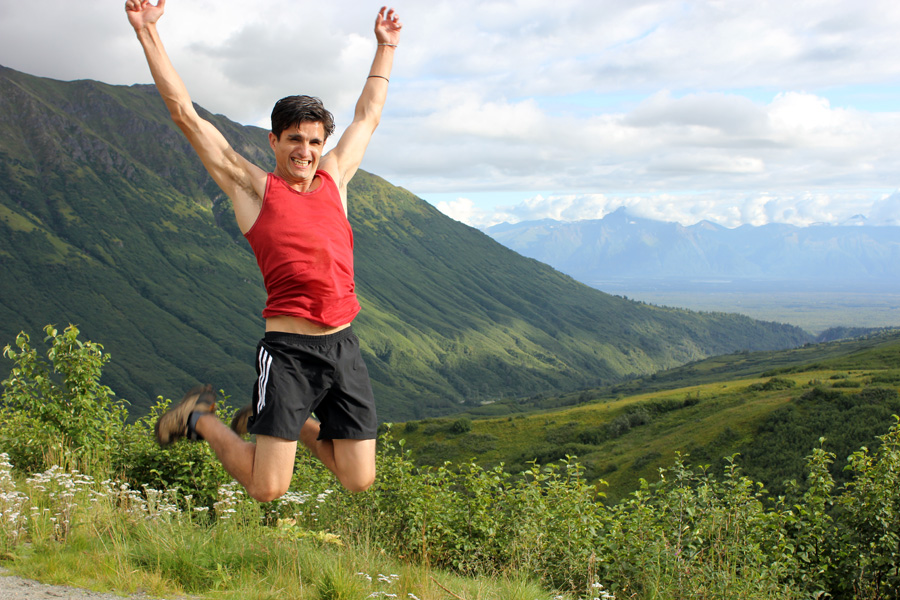 Day two of my Alaskan escapade started at this quaint little lake community called Wasilla, home to of none other than Sarah Palin—“Git ‘er DONE!”

Wasilla is on the way to Hatcher Pass, where Joe and I were doing a hike. I coaxed him to leave the safety of his vehicle to take a quick pic of me by Wasilla Lake. I forgot that I was wearing this burnout red tank top from American Apparel that may’ve been a little too see-through for the northern comforts of the Wasilla Locals. I put the tank in top with my perky nipples winking at everyone as we walked by.—“Hello, HELLO! Hey there! Nice tooth!”

This town is weird. It’s as if a wicked witch turned everyone into a bunch of village idiots. People with reddish necks all turned their heads in mouth-breathing unison when we passed them by, unable to hide their dislike of strangers around these here parks—“Whut in der fuck…?” They shoot people in sheer tank tops, I hear. But I say fuck fuck ‘em. Fuck ‘em ALL! 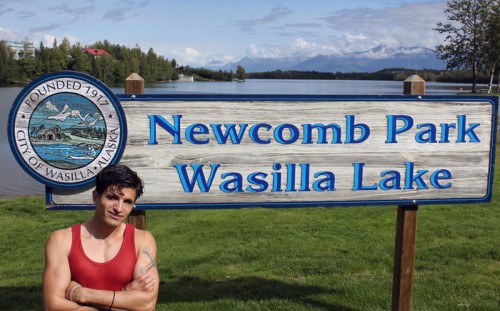 The drive down Hatcher Pass was all trees and green mountain ranges. The hike itself is part of the Willow Creek mining district. Over 500,000 ounces of gold have been dug up from this here area according to Wikipedia. We kept it simple on a man made gravel trail that was surrounded by raging rapids, and all shades of grassy splendor. I can’t even describe it. You have to see the pics to believe. Of course there was bear crap everywhere, so I still clung to my mace spray and Joe’s revolver still protruded from his backpack in open view. 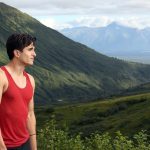 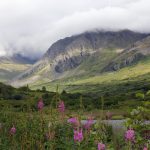 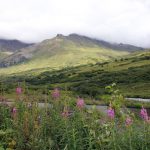 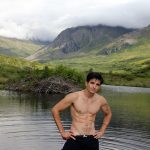 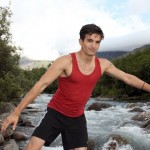 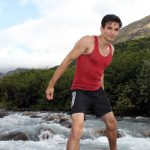 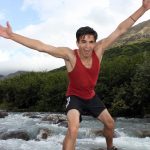 I met Joe a good 20 years ago. He and I have a lot of history and we still crack up over the same shit, but no two lives can be more different. He went from Burbank CA, to Anchorage AK. I remember when he was a little disco biscuit (not a very good one, I might add). Now he’s a marathon runner, he does extreme-mile hikes, river rafting, camping, mountain biking, rock climbing, hunting and all sorts of other crap that makes me break a toenail just thinking about. He goes on these excursions with rugged straight guys who don’t ask, so he never tells. These guys are…shall we say…politically challenged (meaning Republican), so there is no I way I’m meeting any of them on account of they carry riffles. What exactly does the only gay in the village talk about with these hetero hikers, I wondered. Chicks with big tits?

“We don’t come out here to chit chat.” He tells me. “Straight guys can handle themselves in the wilderness. They don’t bitch about the heat, the bugs, or about being tired. They push me to my limits. It’s why I come out here. I like to be challenged. I only know one gay guy in Alaska who can keep up with my activities.”

Mosquitoes were sucking the life right out of me, but I didn’t dare complain. Nope, I bit my tongue and picked up my pace—“Oh wait, take a picture!”

It must be nice to live away from the noise of the streets and walk around with a loaded gun. I must be nice flying solo, and living life in complete anonymity. Joe appears satisfied being left alone. But solitude is not for everyone. I would definitely put the gun to my head out of sheer loneliness. I am by no means saying that I don’t love nature. I love Alaska so far—politically handicapped and all—but I say give me screaming sirens, give me smog, honk your horn, give me the slapping of designer shoes against a pavement or give me death. And yet…one has to admire Joe’s quest for adventure in the great outdoors.

It started raining out of nowhere when we drove to the Willow Creek mines, which are actual shacks that are surrounded by moss covered rock terrain. A nap seemed ideal while we waited out the rain. Joe was out cold instantly. I tried to sleep, but I just stared at the raindrops falling on the sunroof for a good 30 minutes. A twisted thought or two constantly broke my trance: What would Joe do if he woke up and found the tip of my dick resting on his lips. I’ll show you that picture much later in the show (insert cruel cackle here).

I elbowed my friend awake the instant that the rain stopped. We hiked up a rocky trail for a few hours. We found a cool old mining shack from the 1930s still standing, but it was nothing compared to the clear pond we found at the end of the trail. I shed my clothes and ran around naked for a little bit, but of course a barking dog warned me that others were coming. A man and two women stepped up from behind a boulder. They looked at us suspiciously, while I fished for my sheer tank top feeling like total trash. Joe’s a nature buff, so he was more focused on the scenery behind me in a lot of the pics. I’m either a big blurr, or my mouth is wide open like a blow-up doll and my eyes are closed—“AMATURE! Take it again!— Slap! SLAP!

On the way back we took a blast to the past with the sounds of Morrissey, The Pet Shop Boys, Erasure, Depeche Mode, some Madonna and I actually introduced my friend to a singer named Lady Gaga (I’m sooo not shitting you, the guy needs help). Then he played some grassroots banjo shit and I wanted to jump out of his moving truck.

The Hatcher Pass experience was seriously about the sky when the sun began to set. We left close to dusk and the moon was the biggest I’ve ever seen against the Alaskan mountain peaks. I think out of all the pictures that we took, these HAVE to be my very favorite. See for yourself and weep.

It was a great fucking day—well, aside from the fact that the only living creature I’ve seen so far is a dingy squirrel crossing the road—a fucking SQUIRREL!!! Ain’t that some shit?