THE STREETS OF BAKERSFIELD 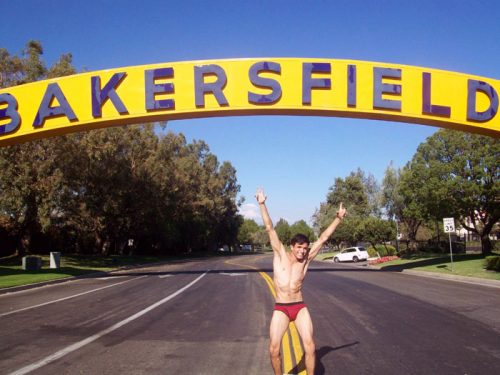 My ass went to Bakersfield this past weekend to visit my cousin Melissa and the rest of the fam.

The last time my ass was in Bakersfield, it was a good fifteen years ago. I took a Greyhound Bus to visit my friend Fernando (I miss Whorenando) who was attending Cal State Bako at the time.

I was young, dumb but kind of fun and I got into a shit load of trouble on that one teensy tiny weekend visit. I remember this sleepy flatland of a town, being boring and depressing as all hell–especially for gay folks. They had the one token gay bar, which I’m pretty sure is the same bar that stands there today called The Casablanca, a cheesy hole in the wall with a dance floor, pool table and I think it had/has two bars.

Anyway, not to get too much into it, but there was One cute gay guy in the entire town. I kid you not, he was like a fucking Yeti. Once I had my sights on him, I was not about to let him go. And after a few drinks, he was sitting on my lap. Of course the One Cute Gay Guy had a semi cute boyfriend who was at home where I decided he belonged. Unfortunately, Boyfriend had friends, so these Bako Bitches had it out for me from the very get go.

Guys hit me up, but I was so damn obnoxious and stupid. Word got around the bar that I was not very nice. There was one man in particular who did not let up. He was kinda gimpy, he had this overgrown pompadour and you get the gist. Anyway, he gimped my way with cane on hand to make some not-so-very smooth moves. The way the story goes is that I made fun of him for being a cripple. But the way it really went down is the guy dared me to kiss him, so I did, and then he went back to his friends and told them that I was a lousy kisser. THEN I called him a cripple (gulp). Senior (as in Spanish for mister) Pompadour had friends. Mean friends. They were big, they were bald, they wore heavy eyeliner and they had no eyebrows. I was scared. They were notorious for beating people up after the bar closed. I was right back in grade school dreading the last call for alcohol. Luckily one of the bouncers got word of what was gonna go down, so he smuggled me out the back exit. A friend of his gave me a ride to the Greyhound station where my poor friend Whornando had to pick me up. The whole thing was sooo stooopid. I was just having fun. 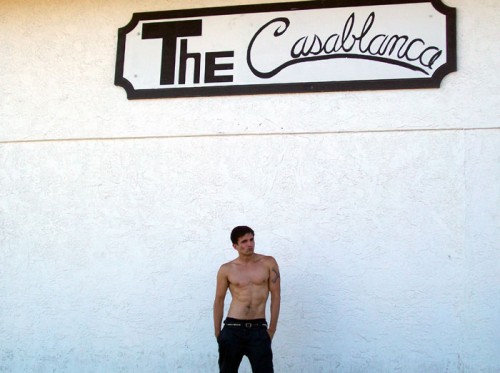 SOOooo…cut to many moons later. I’m back in Bakersfield. I’m old enough to know better. I’m visiting my cousin Melissa, her husband, niece and nephew. Mel is the epitome of a suburban mom, but there are still traces of the girl I grew up with–the same girl that used to sneak out of the house with me when we were kids, while everyone slept so we could chase ambulances all over Inglewood, back when she would stay with us during the summer.

She wanted to take pictures of me in front of Bakersfield landmarks, which did not sound like too much fun, considering it was scorching hot outside. The first place we went to was the Bakersfield sign, which is right off of a freeway. Not to get too into it, but I decided that dropping my shorts would make a much more interesting picture, not too differently from M’s erotic moment (it’s a full circle of life). I thought I was wearing these grey skanky janky Fruit of the Looms, but I was actually wearing a red pair of ball huggers. I was a little nervous at first, considering I was facing a busy boulevard. Melissa became more than a little nervous when she heard moving traffic blaring their horns behind her—“Fucker I have to live here.”

My cuz figured the red underoos were planned. So what does this soccer mom do after I dropped my shorts? She thought the whole thing was so damn funny that she had me running around all over the streets of Bakersfield in my underwear. We even found The Casablanca Club, which looks even sadder during the day.—“I love that you don’t give a fuck” she laughed. She wanted me to grab my dick and flip off the camera, but THAT would be trashy. There had to be line drawn somewhere.

I say Amen to that. Traces of the old me linger. I may still run around in my underwear for shits and chuckles, but thank GAWD I’m no longer that bitter little queen of yesteryear…much.

Bakersfield was actually a lot of fun when you’re running amuck naked. I plan to wear red, white and blue underwear the next time I hit that town. 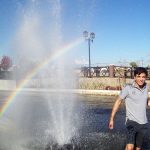 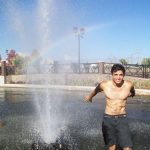 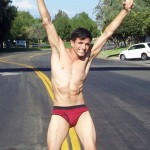 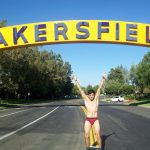 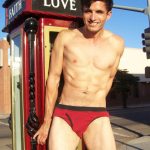 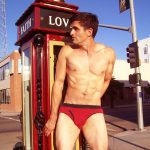 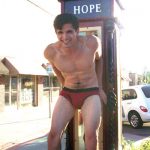 “IT TICKLES…” SCREW THE NEIGHBORS