PRE-PRIDE WITH THE OSBOURNES

I just got back from a pre-pride party at Club Eleven with what was supposed to be Kelly and Sharon O, but Miss Kelly called in sick so it was up to Sharon to run the show solo.

I wore skinny (but not too skinny) dark blue Diesel Jeans that were kind of loose around my assage area (that’s OK though, cuz I like my skinny butt). I topped it off with a Pink Floyd, “Dark Side of the Moon” burnout t-shirt with a subtle rainbow hologram across the pecs (get it? Pride? Rainbow?). My friend John picked me up at 7pm on the dot. I hate showing up to events early. He was dressed kinda trendy in a gray button-down shirt with the sleeves rolled up and a sloppy dark tie hanging from his neck like he just took a nap on a desk. He was either overly attired, or I was poorly and sluttishly decked.

It was a typical circus outside of Eleven with paparazzi clamoring over a tiny strip of red carpet taking pictures of people I did not recognize. We were on the guest list, so that took care of that. The door guy took one look at my name and said, “Oh-oh, here comes trouble.”—The bad rep sticks to me like shit to toilet paper three years later.

The event was split into three sections. You had the ground floor for all the riff-raff. You had the upstairs section, where the VIP enjoyed an open bar. Then you had the Super VIP section where Sharon O was sealed off from the regular VIPs with a velvet rope. I recognized the guy from Sex in the City who plays Miranda’s mousy husband with the thick New York accent. I had no idea he was sweet. John and I went upstairs to the VIP Lounge (of Delusion) where the gay elite clutched their freebee cocktails. There were a lot of big gay names, like activist Adam Bouska, and pretty much the entire City Hall staff at this shindig. Of course Miss Bobby Trendy was there with a hired photog in tow (I hope the guy was hired). She avoided me like a staph infection in the beginning–I assume, cuz he was afraid I was gonna talk shit, but I swear I’ve changed my ways. He was wearing a one-of-kind taffeta, sequined, patchy original, with a tiny black fan (it looked like a fan) pinned to his head. I loved the garish black lipstick that formed a big black O on his small face, looking like every bit a Fame Monster. 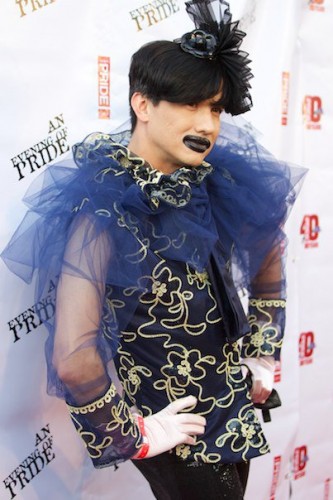 Everyone was trying to get a piece of Sharon O, who mingled nonchalantly in her safe corner. The power to get close to her rested in the small hand of her personal assistant, whose i-phone was blowing up with people begging to be let in. We didn’t need to beg. We were waved inside thanks to John’s connection to pretty much every person behind that rope.

I felt a little foolish, but I was hell bent on getting a pic with me and Sharon for shits and chuckles. Her assistant eventually introduced me to her. I told her how I interviewed Kelly for FRONTIERS and she immediately hugged me and told me that she loved me for it. She pressed her face on mine and John took the first picture where I look completely overwhelmed (derrr). Luckily he took a second shot. I look alright, but she looks pretty damn amazing. 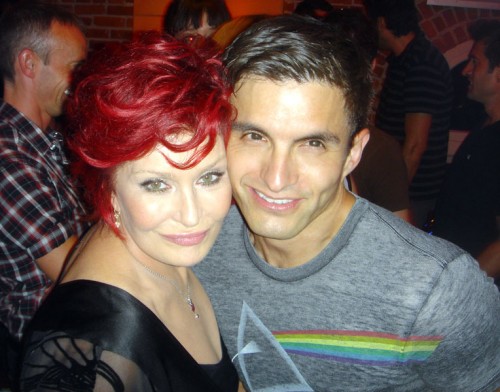 We sort of felt in people’s way afterwards, with people trying to clear out the Super VIP section. There wasn’t anyone that we wanted to talk to. I said hello the Mayor of Weho, who I’ve known for years and I heard The Countess of Housewives of New York was there, but I didn’t see her. We took off prematurely, not realizing that Sharon has a speech saved for the gays.

Anyway, it was a good night. My friend John was every bit the gentleman in our pretend date. Meaning the bitch didn’t put out.

MINOR VICTORIES DO NOT FEED THE ANIMALS