QUEERDO CAMPS IN THE COLD FOR PALIN *Update*

QUEERDO CAMPS IN THE COLD FOR PALIN

Queenly looking 23-year-old Drew Sweatte of Palm Palm Springs camped out for 27 hours, so that he could be one of the first in line to shake Sarah Palin’s hand and get an autographed copy of that silly grandiose book she wrote, “Going Rogue”.

Sarah of course, showed up with her tardy baby Trig in tow to help mama make some moola and to promote the fact that–gosh darn it, she’s just like you and me (puke).

Who gives a shit about a random guy wanting to meet Palin you ask? Well, I think the media picked up on Drew because he seems so damn…um sweet…in every sugary possible way.

Sweetie Sweatte told reporters that he likes Palin, “for being consistent and standing up for her values. I continue to pray for her and her family, if I don’t break down in tears.” The Azcentral reports.

The Palin encounter was a birthday present to himself. This basket closet case spent his 23rd birthday camping out in the cold to meet a woman that would shoot him deader than an furry Alaskan forest creature if she ever found out that he secretly likes to dress up in Palin powersuits and tug on Diana Prince bifocals.

According to Drew’s Facebook page, which is open to the public and boasts over a thousand supporters, he enjoys swimming, The Fabulous Palm Springs Follies, The Golden Girls, I love Lucy, Magnum PI, Moulin Rouge, Bill O’Reilly and reading the Bible (I’m not being a bitch, it’s all THERE!). 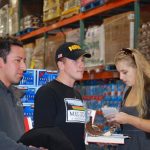 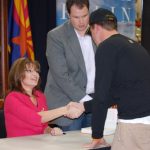 The scariest part of the story is that this Bible thumping Clay Aiken looker says he’s VERY interested in politics. What’s my point? Are we looking at a Larry Craig, Jim McGreevey, or WORST, Charlie Crist in the making?

For the full azcentral article, check out this link: azcentral.com

I did a lil’ “homework”. It turns out my pal Drew came out swinging against homosexuality at one point—“I have never supported that type of lifestyle or the people who choose it.” Then he came out of the closet a year later as a “staunch” Christian gay Republican. Nobody told me when I first wrote about him gushing all over Sarah Palin that I was dealing with a self-hating, sexually repressed homo who joined forces with the Log Cabin Republicans because his daddy is a Republican too. Truth is I may like to poke a little fun at closet queens that pretend to be straight even though they can’t hide the fact that they suffer from a broken wrist. However, I would never EVAH make fun of a gay Republican. I find them…sad. And pathetic. Nothing funny about an openly gay man who embraces the people that would gut him of his civil liberties (let’s not go there).

It turns out Sweatte ran for City Counsel in Palm Springs, but I became too bored to dig into his shenanigans any further, although his Facebook account does state that he’s currently living in West Hollywood, so the run probably didn’t turn out in his favor. Drew should check out the HBO Documentary “Outrage.” Those are the pigs that he wants to roll in the mud with. He already reeks of them at such a ripe age. It must really suck to be him.

And I know better than to make fun of tardy baby tards. However, I can’t help myself in Palins’ case. She walks into a book signing gig holding her baby…because I guess she couldn’t afford a nanny? The blatant manipulation of that um, “special needs” baby is pretty disgusting, but the blind refuse to see.

And lastly, I should point out that as of 2/10/10 I have never promoted this website, even though I’ve been writing random blogs here and there for shits and chuckles. Yet the rabid dogs came out sniffing and barking after the mere mention of Palin. I really don’t get the interest in this woman. I can kinda/sorta see how women may be attracted to her for being a mom and getting ahead, but intelligent women must recognize that Palin is the opposite of anything that resembles smarts with her goofy antics and scribbled palms. Smart women must lay off of her for the sake of Girl Power? I can also see how some nasty male hick would find Palin sexy, but a GAY GUY weeping over the presence of Palin really beats the steaming shit right out of me. Self hating queens like Drew need to seriously wake up and smell the ballsack.