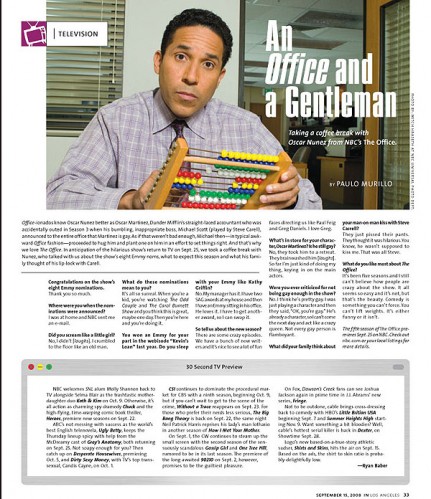 Office-ionados know Oscar Nunez better as Oscar Martinez, Dunder Mifflin’s straight-laced accountant who was accidentally outed in Season 3 when his bumbling, inappropriate boss, Michael Scott (played by Steve Carell), announced to the entire office that Martinez is gay. As if that weren’t bad enough, Michael then—in typical awkward Office fashion—proceeded to hug him and plant one on him in an effort to set things right. And that’s why we love The Office. In anticipation of the hilarious show’s return to TV on Sept. 25, we took a coffee break with Nunez, who talked with us about the show’s eight Emmy noms, what to expect this season and what his family thought of his lip-lock with Carell.

Thank you so much.

Where were you when the nominations were announced?

I was at home and NBC sent me an e-mail.

No, I didn’t [laughs]. I crumbled to the floor like an old man.

What do these nominations mean to you?

It’s all so surreal. When you’re a kid, you’re watching The Odd Couple and The Carol Burnett Show and you think this is great, maybe one day.Then you’re here and you’re doing it.

You won an Emmy for your part in the webisode “Kevin’s Loan” last year. Do you sleep with your Emmy like Kathy Griffin?

No.My manager has it.I have two SAG awards at my house and then I have an Emmy sitting in his office. He loves it. I have to get another award, so I can swap it.

So tell us about the new season?

There are some crazy episodes. We have a bunch of new writ- ers and it’s nice to see a lot of fun faces directing us like Paul Feig and Greg Daniels. I love Greg.

What’s in store for your character, Oscar Martinez?

Is he still gay? No, they took him to a retreat. They brainwashed him [laughs]. So far I’m just kind of doing my thing, keying in on the main actors.

Were you ever criticized for not being gay enough in the show?

No. I think he’s pretty gay. I was just playing a character and then they said, “OK, you’re gay.” He’s already a character,so I can’t come the next day and act like a crazy queen. Not every gay person is flamboyant.

What did your family think about your man-on-man kiss with Steve Carrell?

They just pissed their pants. They thought it was hilarious.You know, he wasn’t supposed to kiss me. That was all Steve.

It’s been five seasons and I still can’t believe how people are crazy about the show. It all seems so easy and it’s not, but that’s the beauty. Comedy is something you can’t force. You can’t lift weights. It’s either funny or it isn’t.

The fifth season of The Office premieres Sept. 25 on NBC. Check out nbc.com or your local listings for more details.

HOT AND HOMELESS PETER BJORN AND JOHN AND ME