San Francisco-based artist and LGBT activist Gilbert Baker, the man who first gave the world the iconic LGBT rainbow flag in 1978, has died at the age of 65.

His longtime friend and author of “When We Rise: My Life in the Movement,” Cleve Jones, made the announcement via his twitter account yesterday. 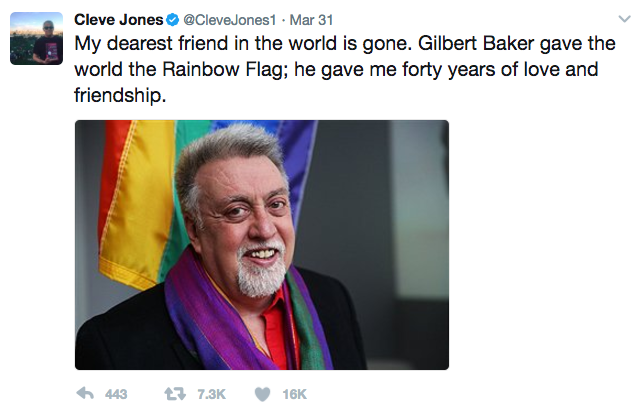 Jones also posted a photo of Baker with President Obama. Friends were invited to meet him at 7pm for a vigil under the rainbow flag designed by baker at Castro and Market Street yesterday. 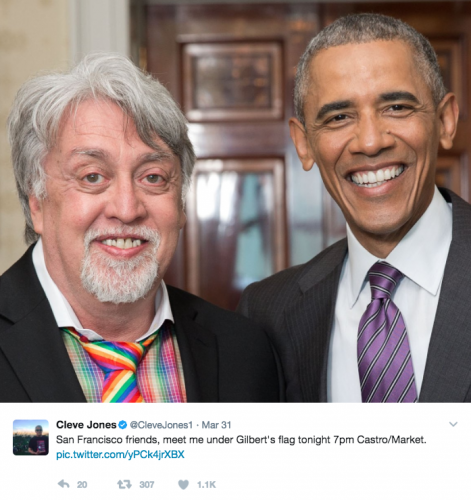 Most of you are probably reading his name for the very first time.

Baker began making banners for gay rights and anti-war protests. Harvey Milk kept him busy during his activism. Milk rode under the first rainbow flags made by Baker at the San Francisco Gay Freedom Day Parade in June 1978, just months before the politician was murdered by a former city supervisor (the Twinkie made him do it).

The world lost a true pioneer in Baker whose work of art would inspire people from around the world to be out and proud to be lesbian, gay, bisexual and transgender. The rainbow flag was also a symbol of peace.

The original pride flag had 8 colors. Baker gave each color a specific meaning. The color pink was dropped because the fabric was expensive and hard to find, and eventually the color turquoise was also removed to make the rainbow an even number, resulting in the rainbow colors one sees painted on half-naked go-go boys at pride parades today.

According to Jones, Baker died peacefully in his sleep at his home in Harlem on March 31. He is survived by his mother and a sister, both of whom resided in Texas.

The most tragic part about his death is that most of the gays today are unaware of the man behind the pride flag that they hold so dear. Baker had the opportunity to trademark the pride flag when he first created it, but he refused. He said it was his gift to the world. It’s sad that his generous contribution will be known to a lot LGBT folks for the first time through the announcement of his death.

His name was Gilbert Baker. Look him up.