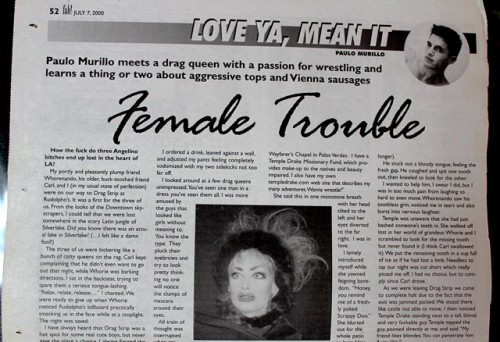 In a piece dated July 7, 2000, I wrote a somewhat cunty column called “FEMALE TROUBLE” for Fab! Newspaper,  where I describe my first time at the notorious and hilarious Dragstrip 66–an event that does not need much introduction for anyone who grew up at or near Los Angeles. DS66 delivered 20 years of drag queens, club kidz, art, fashion, music, madness and mayhem propped on high hooker heels.

Co-founder  of Dragstrip 66, DJ Paul V., and producer Phil Scanlon  are currently smacking the pavement in an effort to raise funds to help in the completion of the movie Dragstrip 66: The Frockumentary, which promises to deliver a  celebration of the LA nightclub that offered a crazy collision of performance art, music, fashion, masquerade, community, and fun, dating back to the early 90s. And judging from their footage, it seriously looks like the closest thing to Studio 54 this side of the western hemisphere.

Before we continue, check out their tubestarter page by clicking this here link:  Dragstrip 66 : The Frockumentary  and please, please, PLEASE, dig, dig, DIG  into your pockets and give, give, GIVE this documentary a chance at its rightful place in our fabulous LGBT history.

Anyway, the name of the Fab! column is an obvious nod to my favorite John Waters film of the same name, and it turns out that the Frockumentary not only references Mr. Waters, but Mink Stole, who plays Taffy in the movie (with the face of a retarded brat…uh, to quote the movie), was known to attend and perform at this crazy event during its heyday.

For more information on Dragstrip 66: The Frockumentary, visit their website at:  ds66thefrockumentary.com/

Now regarding the column I wrote for Fab! Newspaper, keep in mind that I fancied myself a true incarnation of a WeHo boy and barely made it out of that gay ghetto, so like, of course I’m gonna confuse Rudolpho’s for Adolfo’s and cut Dragstrip 66 down to simply Drag Strip, because that’s what my friends called it, and of course Dragstrip 66 was the only reason any WeHo queen had any excuse to brave the migration to the Latin jungles of Silverlake…where we would undoubtedly get lost.

I attended DS66 several times after this column was published, but I never dressed up in drag because (a) I had way too much internalized homophobia to don a dress on any night other than Halloween, (b) I was a lazy fuck and doing drag was way too much work and (c) the last time I did drag, somebody confused me for Sandra Bernhard, which–no offense to Sandra B–but I took offense.

I have some crazy–if not fuzzy memories of that event (ugh, my friend Josh and I made out with a cute guy in a three-way kiss on a double dog dare–it’s the only time I ever locked lips with a friend–meaning it’s the only time I dabbled at lesbianism).  The events below actually happened, except for the part where I pretend not to know Temple Drake (that’s her actual photo in the column). I’ve known that bitch since 1991, which is why I was able to quote her verbatim. My friend would morph into Temple with the help of some booze (lots of booze), and she became this monster who LOVED to embarrass me by pretending she didn’t know me and then spewing a bunch of crazy shit as you will read below. 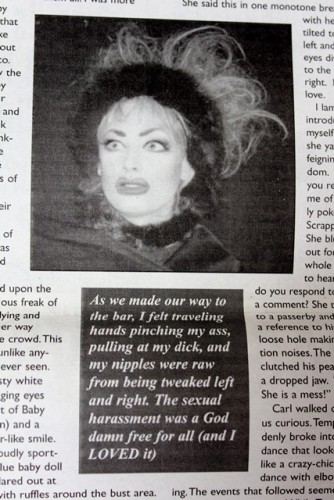 How the fuck do three Angelino bitches end up lost in the heart of LA?

My portly and pleasantly plump friend Whorenando, his older"”buck-toothed friend Carlos, and my fabulous self (in my usual state of perfection) were on our way to Drag Strip at Adolfo's. This was a first for the three of us, and from the looks of the Downtown L.A. skyscrapers, I could tell that we were lost somewhere in the scary Latin jungle of Silverlake (did you know there was an actual lake in Silverlake? I didn’t. I feel like a damn fool.)

The three of us bickered like a bunch of catty queens on the rag at every wrong turn.   Carlos kept complaining that he  didn't even want to go out that night, while Whorie was barking directions that lead us nowhere.   I sat in the backseat, trying  to spare them a serious tongue-lashing–"Relax, relate, release"¦" I chanted.

We were ready to give up, when Whorie noticed Adolfo's signage practically smacking us in the face, while we paused at a a stoplight.   The night had been saved!

I always heard that Drag Strip was a hot spot for some real cute boys, but never gave the place a  chance.   I figured the place would be crammed with sweaty, obnoxious, drag queens, even though I was  told the place attracted a lot of cuties out of drag.

We entered Adolfo's and I could not believe the crowd. The place was fucking packed! It was a breath of fresh air to see new faces and not the same tired Weho queens (you know who you are).   The place reeked of fresh meat and was filled with positive and fun energy.

"Is my hair too high?" I asked Whorie, while patting my head down (speaking of Weho queens"¦).

"Do I look fat?" he asked in return, looking up at me weakly, like a baby seal about to be clubbed upside the head.

Nothing prepared us for the crowd standing outside. The place was crammed to capacity.   We squeezed through all sorts of body types as we made our way to the bar at the far back. I felt traveling hands pinching my ass, pulling at my dick, and my nipples were raw from being tweaked left and right. Gay men are pigs.  The sexual harassment was a Goddamn free-for-all (whispering) and I loved it.

I ordered a drink, leaned against a wall, and adjusted my pants feeling completely sodomized with my two sidekicks not too far off. I looked around at a few drag queens, feeling completely unimpressed. You've seen one man in a dress, you've seen "˜em all, I thought to myself unfairly. I was more amused by the guys that  looked like girls without meaning to. You know the type; they pluck their eyebrows and try to look  pretty, thinking no one will notice the clumps of cheap mascara and guyliner cracking around their eyes.

All train of thought was interrupted when my eyes rested upon this fabulous freak of nature elbowing her way through the crowd.   This "girl" was unlike anything I had ever seen. She had pasty white skin, big ass bulging Bette Davis eyes (reminiscent of Baby Jane  Hudson), and her lips were a blatant Lucille Ball rip-off. with a smile that can only be described as demented. She was proudly sporting a light blue baby doll dress that flared out at the knees with ruffles around the bust area.   Her hair was a ratted blond mess that was held together with a huge bow, very ala Madonna Lucky Star (she called it her "Power Bow").

She stood in front of me nonchalantly, but did a double take when she saw me staring at her in complete awe.

"Hi, my name is Temple Drake," she spoke robotically and fed me an introduction that went along the lines of. "I have an eleven-inch uncut clitoris, I am an aggressive top. My passion is wrestling.   I enjoy Vienna sausages and picnics at the Wayfarer's Chapel in Palos Verdes.   I have a Temple Drake Missionary Fund, which provides make-up advice to the natives and beauty impaired.  I also have my own templedrake.com web site that describes my many adventures. Wanna wrestle?"

Her head tilted to the left and her eyes diverted to the far right. It was pure lunacy! I was in love.

I leaned to introduce myself, but she yawned, and picked at a pretend hangnail and feigning boredom.  "Honey, you remind me of a freshly poked monkey from the Central Park Zoo." She blurted out randomly and loudly for a packed audience at the patio. Seriously, how do you respond to such a comment?

She then turned to a passerby and made a reference to his gaping loose hole making suction noises. People laughed, but the queen was none too impressed. Pearls were clutched—"Ugh! She is a mess!" He shrieked to his friends.

Carlos walked over to us–eyes round with curiosity.   Temple broke into a sudden tap dance that looked more like a crazy-chicken-dance with elbows flailing.

The events that followed seemed to happen in slow motion.  Carlos sucked on his beer, while Temple did her chicken dance. Temple gained momentum and accidentally elbowed Carl on the face"”ramming the beer bottle down his throat.   Carl had that "Oh shit!" look in his  eyes that people get for a split second when they fall or get popped on the face. He leaned forward and when he looked up, there was a gaping black hole where his two upper front teeth should have been. I saw his tongue feeling around his mouth. He coughed and spit one tooth out, then was on his knees looking for the other. I just about died, from horror mixed with this horrible inappropriate need to laugh.

I wanted to help him"”I swear I did"”but I was in too much pain from busting up internally to even move. Whorenando saw his toothless grin, noticed me in tears, and he turned his body around. All you could see were his shoulders shaking with nervous laughter.

Temple was unaware that she had just bashed someone's teeth in.   She walked off, lost in her world of grandeur. Whorie and I scrambled to look for the missing tooth, but never found it (I think Carlos swallowed it).   We put the remaining tooth in a cup full of ice as if he had lost a limb.   Needless to say our night was cut short, which really pissed me off.   I had no choice, but to comply, since Carlos drove.

As we left Drag Strip, we came to complete halt, due to the exit area being jammed-packed.   We stood there like cattle not able to move. I then noticed Temple Drake standing next to a tall, blond, and very fuckable guy.

Temple tapped the guy, pointed directly at me, and said, "My friend likes blondes.  You can penetrate him if you like."

Everyone heard this and laughed, much to my utter humiliation.   "That would be the second time tonight," Temple continued to more laughter.

I looked at the guy cringing—"Tha-tha-that's not true…" I sputtered. Blushing is not one of my  better attributes, but when it happens, it is a full Technicolor event.

We left Drag Strip, only to realize that Carl's troubles were not over (Did I mention he wanted to stay home that night?). After walking for almost 15 minutes, we realized his car was nowhere in sight. We walked back and forth, very determined, until finally admitting defeat.   His Car had been towed.

That night pretty much ended the same way it began with three catty queens on the rag, pointing fingers, in what had to be one of the biggest bitch fights to happen far east of La Cienega and Santa Monica Boulevard.