LA PRIDE 2015 WAS XXL WITH CHANNING TATUM AND MATES

When the good Rev. Troy Perry, and 13-year-old trans activist Zoey were announced as Grand Marshals of the 45th Annual Los Angeles Pride parade in West Hollywood, I’m sure I’m not the only one who barked at Siri to wake up and do a Google Search–pero pronto!

So here’s the deal: No one is going to deny a reverend and a 13-year trans teen  their moment as Grand Marshal. No way. No how. Not openly. But this year’s Grand Marshals announcement resulted in a silently sibilant umm, hissy fit. People were not having it—“What!? No celebrity name? Not even  an 80’s icon? They couldn’t get a D-list name as Grand Marshal? WTF!”

Which is like so not fair, considering this year’s Grand Marshals follow in the footsteps of last year’s Demi Lovato who filmed a music video while riding a float. And you have other celebrity names like Molly Ringwald and Kelly Osbourne to name a few Pride Parade Grand Marshals in recent past years. LGBTQ activism should stand on its own merit, but how does one compete with Molly Ringwald?

I hate to go there, but expectations tend to be set pretty low when it comes to LA Pride–especially during the parade–and especially for those of us who have been at it far too many times.  The lack of luxury at the biggest pride festival in Southern California has been the topic of heated discussions for many years at West Hollywood City Hall meetings, as well as in the comments section of WEHOville, so I’m not just being shady about how–in a creative city like West Hollywood, with citizens who boast tight connections to Tinsel Town (is Tinsel Town still a thing?), the results in celebrity turnout can be a little umm, lacking in the luster department at pride. 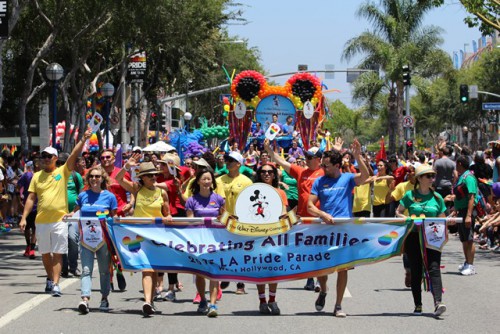 How…EVER…the weight of a big name for this year’s LA Pride Grand Marshal did not matter much–not really, because speaking from my own personal experience (and it’s all about my own experience), the parade was a lot of FUN this year. It was seriously the most fun I’ve had at a pride parade in a very long time. Yeah, it’s still heavy on the commercial breaks, but this year, the commercials had some wow factor. There were way more floats than I remember with less sleaze; the crowds marching were larger, the gaps between the floats were still there, but they were tighter, the support from large corporations was broader, and the re-occurring message throughout the day was all about love, love, LOVE! And who can argue with love?

Then the Grand Marshal float rolled by with the reverend, his hubby, and little Zoey, who didn’t really smile like she meant it, as she waved halfheartedly to the crowd (teens these dayz). All three sat to the far left, leaving that pretty float with way too much negative space. It looked empty. Why some  family and friends were not included on that float to give it some life, beats the daylights right out of me, but whatevs. 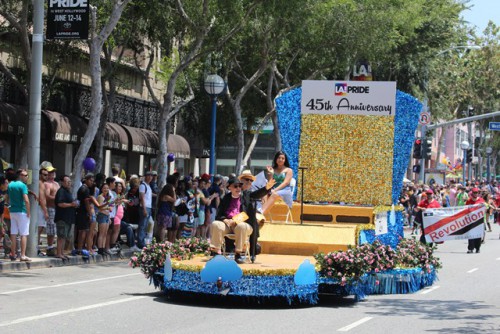 Again, no matter,  because the Magic Mike XXL flatbed float wafted by and queens in the crowd lost their panties and then they lost their shit—“Is that him? OMG, it’s really him!”

The “him” they were referring to, as we all well know, was none other than Channing Tatum, who was there with his MMXXL movie mates Matt Bomer and Adam Rodriguez to show some support for the LGBT community, and plug their new  movie. The unexpected surprise (redundant, I know) was THE highlight of the entire parade, in my opinion. 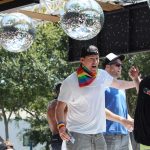 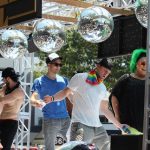 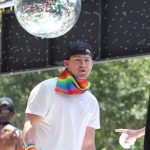 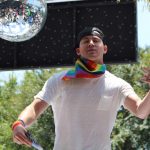 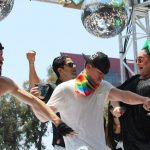 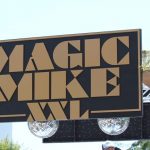 I’m pretty agnostic when it comes to Tatum; I didn’t catch the first Magic Mike to be honest—however, I thought it was way cool that these guys showed up at a gay pride parade in West Hollywood to mingle with the gays, show some support in the name of pride and maybe sell a movie ticket or two. They didn’t have to; the float was sexy and loud and fun on its own, but that extra star effort made a world of difference. Sure, they kept their shirts on and Tatum was quick to cover his behind after his shorts split into a giant slit in his rear (he wears briefs), but he gave us some moves, which gave the movie a shitload of publicity, and it drove spectators on Santa Monica Blvd absolutely nuts. It was a great moment.

Oh yeah, and then this happened…

He didn’t see me coming and he didn’t so much as flinch, when I shamelessly rested my head on his shoulder and took a bunch of selfies. Let’s see, we’re about the same size (I’m leaning in so I look smaller), which means he’s taller than I expected. I didn’t really get a good whiff of him, so can’t tell you what he smells like  (sorry to all you pervs who have been asking), but I’ll be damned if he didn’t leave me all moist and with a sudden urge to buy a Magic Mike XXL movie ticket (in theaters everywhere, July 1).

And I had no idea Entertainment Tonight was there to capture the selfie moment, which aired on national TV the following night, which was so funny to me.

So yeah, it was a great LA Pride.

Below are some captured parade moments from yours truly, exclusively for this here hiss fit.