QUEEN OF THE DESERT AT PALM SPRINGS PRIDE 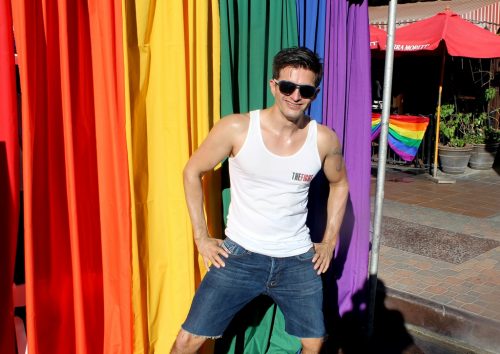 You know how some people say they’re big in Japan? It turns out I’m HUGE in Palm Springs!

My ass was at the desert this past weekend for my very first Palm Springs Pride.  I was there manning a booth for THE FIGHT magazine where I’m currently a featured writer/photographer/promoter/social media operator, and go-to point person extraordinaire, so it was more work than actual play where Pride festivities were concerned, but the weekend had its prideful  moments.

I could not believe the number of people who approached me to say nice things about my work in reference to  the hateful kerazy years, when I wrote a certain column. People remembering me is one thing, but people taking the time to say they like me–they really, REALLY like me–was proof in the pudding that my ass was not in WeHo no mo’. 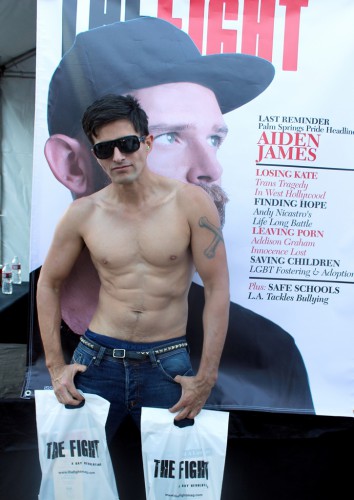 They say they only say nice things about you when you’re dead. It kinda felt like people were paying their respects to a part of me that is exactly that–dead, dead, DEAD! But I had to destroy certain parts of myself (the hateful cunty parts, for the most part), so I could live, live, LIVE dammit!!!

It’s so weird. I used to get the slit-side-eye wherever I went in West Hollywood–not to mention the few occasions when I had ice flung at me from across the room at a bar. There was also the time a  demented fucker physically attacked me on the street–and all because of my poisoned pen, but in Palm Springs, I received nothing but love, love, LOVE!!!

One guy told me he had to say hello and express his adoration for my writing.  Then he said he has been following my journey since the early 90s, and I was like, really bitch? The early 90s, bitch? How old does this bitch  think I am???  OK, so I wrote that first column in 1999, which is technically the tail-end of the 90s, but the column ran until 2006. I fail to see how that 99 clumps me in with C&C Music Factory–but no matter, I took the compliment and jammed that shit into my sequin coin purse to horde for a rainy day.

One guy was so excited to see me, he said he wanted a photo with me, which made me nervous, because one never knows where such photos end up and under what context—Cut to a photo caption on Instagram that reads: “Look what I found in Palm Springs! #tragicqueendom.”

I had a another guy tell me he and his boyfriend were huge fans and that I had not aged one bit (blush). Then he said I looked exactly the same as I did…in the early 90s (GGGRRR). Never you mind that he was so plastered, he could barely walk. I still ate that shit up. I glanced at him all dreamy-like, and did my damndest not to show him my grill, which is all brackets and sprockets and wires and kinda looks  like heap of mangled railroad tracks at the moment.

I didn’t just feel the love in relation to my writing that weekend. The men in Palm Springs are waaaayyyy nicer than the uppity muscle powder puffs one encounters in L.A. (oh,  you know who you are), but that goes without saying.

And speaking of what-once-was: Can we talk about Gay Pride in Greater Palm Springs for a moment? I could not get over the fact that Gay Pride took place in the heart of downtown Palm Springs! This desert town gets a bad rap for being God’s waiting room for the old and decrepit, but man…talk about change; talk about progress; talk about new and improved. The city even has an openly gay mayor, which is a far cry from the days of Sonny Bono.

The last time I thought I could get away with being so blatantly gay in Downtown Palm Springs, I almost got my friend and me KILLED!!! It was during White Party Spring Break weekend, umm…in the early 90s (gulp).  I decided to walk out to Palm Canyon Drive in a see-through mesh crop top and a skimpy x-skinny bikini, courtesy of International Male, and my bold gayness was so offensive to some of these college hetero fucks, that I thought they were gonna mow down the two homos with their fancy convertibles, right out in the open street–“Faggots!” They screamed. “Fuck you faggots,” the hetero yell echoed from all directions. I’m not kidding you, we barely made  it around the block alive. 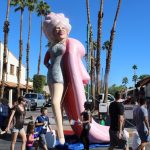 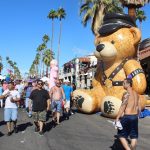 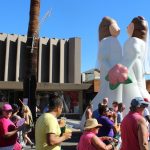 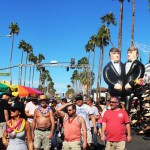 It took several decades, but there I was on that very same street, completely floored by the pride flags, rainbow colored signage, and the gay inspired balloons in the shape of two grooms, two brides, a leather bear, and they even have a balloon in the likeness of Palm Springs drag queen hostess with the moistest–err, I mean, mostest–Bella Da Ball, who was in her element during pride weekend. 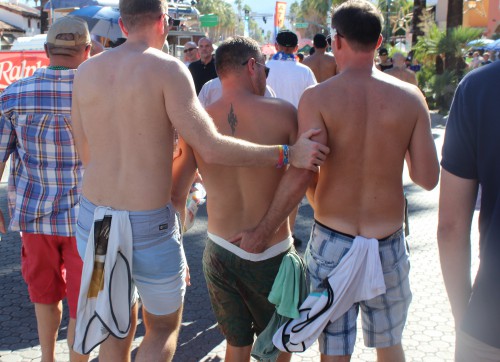 Shirtless guys groped each other right out in public, and I saw some scandalous getups that made my mesh crop top and x-skinny bikini look all modest and demure—seriously, who knew gay would take over Palm Springs one day? 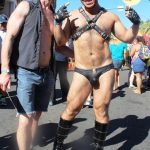 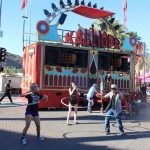 I looked up and down Canyon Road and I took it all in. I saw young gays mixed with the not-so-young, same-sex families pushed strollers, high school kids marched in the parade school band and thousands upon thousands of people showed up to celebrate Pride in Downtown Palm Springs. The whole thing was huge, huge, HUGE!!!

I took it all in.

THE MADONNA MATERIAL GIRL DRESS AND OTHER GEMS HONEST A HOLE