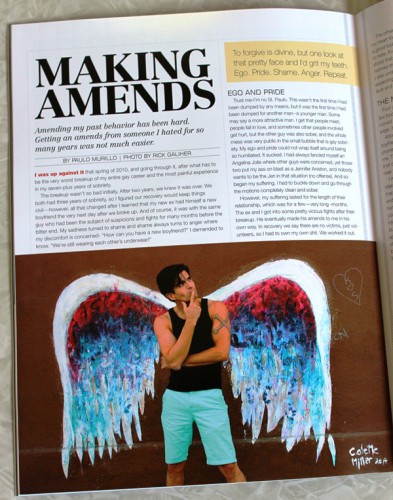 Below is a personal ditty I wrote about being on the receiving end of an amends.  It was like… Opposite Day.  I’ve written about this before with not much closure until this point.
The article was published in the latest issue of The Fight Magazine.
Luv,
Me
===
MAKING AMENDS
Amending my past behavior has been hard.  Getting an amends from someone I hated for so many years was not much easier.

I was up against it that spring of 2010, and going through it, after what has to be the very worst breakup of my entire gay career and the most painful experience in my seven-plus years of sobriety. The breakup wasn’t so bad initially.  After two years, we knew it was over.  We both had three years of sobriety, so I figured our recovery would keep things civil—however, all bets were off after I learned that my new ex had himself a new boyfriend the very next day after we broke up.  And of course, it was with the same guy who had been the subject of
suspicions and fights for many months before the bitter end.  My sadness turned to shame and shame always turns to anger where my discomfort is concerned- “How can you have a new boyfriend?” I demanded to know.
“We’re still wearing each other’s underwear!”

Trust me-I’m no St. Paulo.  This wasn’t the first time I had been dumped by any means, but it was the first time I had been dumped for another man–a younger man.  Some may say a more attractive man.  I get that people meet, people fall in love, and sometimes other people involved get hurt, but the other guy was also sober, and the whole mess was very public in the small bubble that is gay sobriety.  My ego and pride could not wrap itself around being so humiliated.  It sucked.  I had always fancied myself an Angelina Jolie where other guys were concerned, yet those two put my ass on blast as a Jennifer Aniston, and nobody wants to be the Jen in that situation (no offense).  And so began my suffering.  I had to buckle down and go through the motions completely clean and sober.

However, my suffering lasted for the length of their relationship, which was for a few – very long -months.  The ex and I got into some pretty vicious fights after their breakup.  He eventually made his amends to me in his own way.  In recovery we say there are no victims, just volunteers, so I had to own my own shit. We worked it out. 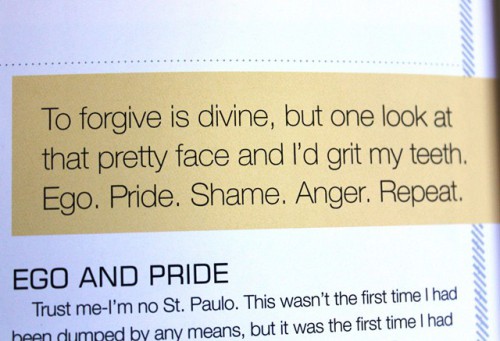 The other guy was a whole different story.  I had a lot of hatred in my heart for that guy, even though he was only partly to blame.  He’s a good looking guy in a Keanu Reeves sort of way, so he was easy to hate. Every time I saw him, I wanted to punch his face in.  I understood that my hatred towards him did him no harm and that it only harmed those close to me who took the brunt of my resentment.  I also understood that hating him was like drinking the poison and expecting him to die.  To forgive is divine, but one look at that pretty face and I’d grit my
teeth. Ego. Pride. Shame. Anger. Repeat.

Four years went by.  Then one evening, we were forced to sit a few bodies away from each at a lecture of sorts.  All three parties had moved on and found love elsewhere, yet this guy still put my teeth on edge.  It was so uncomfortable being around him.  About a week after that meeting, I received a text from my ex-boyfriend, telling me that that the guy he dumped me for wanted my phone number. The other guy clearly wanted to make an amends to me.  The question was, did I want to hear it? Then I thought about all that discomfort. I was tired of my silent rage, so like yeah, I had to hear this guy out.  I would want to be heard. I repeat: I’m no angel.  Needless to say my amends list is long. Making amends wherever possible is tough.  I remember being told that I needed to face the realities of my negative impact on others and I was like, “But I’m not sorry! A wise woman told me that it’s human nature.” However, making an amends is more than saying you’re sorry; it’s about a reparation or compensation for damage or injury of any kind.  I swore the people I had wronged had it coming, but that was my way of dodging any remorse, guilt and (here we go again) shame from the moral ruins of my addiction and the trail of shattered relationships I littered along the way.  Amending my past behavior has been hard.  Getting an amends from someone I hated for so many years was not much easier.

We met at the WeHo library.  On my way there, I realized the only words I have ever spoken to this person were, “nice to meet you.”  That’s it. Yet the fights and conversations I’ve had about him, as well as the back and forth he and I have had…inside my head, have been endless. I’m not going to get into his amends process and I didn’t dare use the word “forgive” after he was done, for what am I not…an angel.  I did tell him not to worry about me.  I told him, I didn’t want to hate him anymore – hatred didn’t serve me too well.  I wanted to remove any discomfort he and I felt when we were in the same room and I acknowledged that a lot of the pain I went through was self-inflicted and ego-based.  And this was a little more mature than I care to be, but we actually hugged it out in the end – all in the spirit of fellowship, one alcoholic to another, trying to stay the course. I also hate to admit how relieved I felt after it was over. It took four years, but I finally dropped the rock. It was really over. I walked away from that meeting thinking how Jennifer Anniston has done alright for herself despite her being the Jen.  And then I got to thinking that I should’ve made that bitch grovel for a little longer.