If the old West Hollywood Sports Connection (Erection/Infection) used to be a gay club back in its hey day in the 80’s and early 90’s (now it’s just a public gym known as 24-Sour Shitness), then The Athletic Club gym was pretty much an upscale gay oasis with its men-only policy that also lasted well into the mid-90s.

I remember The Athletic Club in West Hollywood back in the day.

The Athletic Club was located on the south-side corner of Santa Monica Boulevard and Huntley Drive, next door to The Palms lesbian bar (closed, ya know) on the same block as The Sports Connection.

The place was smaller, more private and personal with a very  pretentious setup. They offered a towel service when you walked through the door, which made a bitch feel mighty fancy back then.  I recall the pool in the backyard being mostly for show.  It was surrounded by palm trees and other greenery, which gave it some sort of gay resort appeal.  The no-women rule allowed the place to offer rooftop sunbathing in the NUDE, so you best BELIEVE  there was some serious splatter of man chowder on that poor, POOR sundeck.

That whorie little gym was notoriously known for its private little rooms with tanning beds, but mostly because the doors had locks on ’em, which allowed some  privacy when gays engaged in some man-on-man fornication.  I believe the trick was to leave your door unlocked and pray that the right kind of man made his way inside and locked the door behind him.  There was also a Café that was $5.00 too highly priced for the microwaveable crap they sold, and–oh yeah, they also offered some workout equipment…if you were into that sort of thing.

My co-workers from the Sports Connection and I would take our lunch break at the Café inside The Athletic Club when we could afford it.  The bodies seemed to be way hotter at that smaller gym up the street.   Buff gays walked around in their mesh spaghetti tank-tops during a time when brownish, fake-n-baked bleach blonde bitches ruled West Hollywood Land.

Of course, I’ve heard many different takes on the history of the two WeHo gyms located on what is now the heart of West Hollywood’s Boystown.  The sports Connection used to be called The Beverly Hills Gym way back in the olden days.   It used to be a men’s only club and there was a separate, smaller gym for women up the street.  Somewhere along the historical lines, the gyms sort of switched roles; the men’s Beverly Hills Gym became the unisex Sports Connection and the women’s smaller gym would later became the men’s-only Athletic Club—or so the story would  go according to word-of-mouth from some of the old members who used to give us a West Hollywood history lesson at the front desk.

The members also started rumors about how the gyms used to be owned by mobsters and they had gambling casinos in the gym’s basement where the men’s locker room is now located.  One member told us that Bugsy Seigel came up with the blueprints for the development of Las Vegas in that basement, but I’m not so sure I believe all that nonsense (much).

I actually worked at The Athletic Club for a short while in a feeble attempt to jump ship after hearing rumors that the Sports Connection was sinking.  One of the first things I was taught during my training, was how to dip into the register and pocket  some money on the side from those daily workout passes and not get caught.  The employees robbed that place straight out of business.

I remember the best part about working at that gay oasis, was washing  those disgusting workout towels.  The guys at the front desk used to fight over who took turns doing the laundry.  I can explain: The washer and dryer were located in the basement.  What the members didn’t know, was that there were open air vents that offered a very clear view into the men’s showers from the ground up.  It was like that pervy Porky’s movie from back in the 80s, only waaayyy gay.  I never felt too bad about seeing the members naked, because these guys were clearly putting on a show, judging from the deliberate lathering that went into their junkage, while facing the center of the main entrance so that everyone could see their private business–including those of us who were hiding in the basement.  It got to a point where we stopped pretending to do laundry and the owners could never find us doing our duties at the front desk—peek-a-ru, I see you.

I hate that my flashbacks to these gyms always lead to stories about secret anonymous sex, but that’s just how the shit went down back then (don’t ask me, I don’t make the rules).  I’ve shared about this before, but since this is a blog dedicated to The Athletic Club, I must share this again (in case you missed it).  I’m talking about the time I walked in on two guys in a compromising 69 position.  We were closing; during my walk-through, I ran into these two fools going at it inside a tanning bed (they forgot to lock the door).  It was an older white guy (I was way young, so the gay seemed way old in his early 30’s) and this younger Latino trash (just kidding, but yeah, he was kinda trashy).  The white guy was on his back.  He had this ballsack hanging over his face when he looked up and saw me standing there with my hands on my hips.  BUSSSTED!!!  The other guy had his back turned to me, so he kept going at it–completely oblivious to being freshly busted by the penis patrol.  The gringo  tapped him to make him stop.  They both climbed out of that polluted tanning bed (it wasn’t even on) and walked past me without saying a word.  I was shocked, disgusted, embarrassed and turned on, all at the same time.  I played it cool though and didn’t tattle on them.  Boys will be boys. 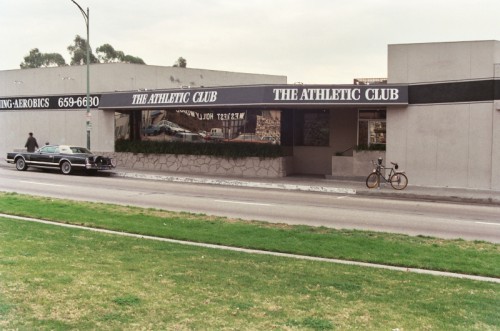 The gym struggled to stay open.  It was a little too exclusive for its own good.  I remember the owners were friends with everyone, so everyone demanded discounts and free entries for their tag-alongs.  Desperate times called for a lift on the ban on female members–not that women tore down the doors to join; they were only allowed to use the workout facilities, but would have to change into their workout clothes in a bathroom the size of a closet.  The presence of women meant no more nudie sunbathing, which also meant no more gay oasis, and before too long the Athletic Club was no more.  It became a World’s Gym in the mid-90’s.  That shit show went out of business and stayed closed for a while and then it opened again as a World’s Gym, only to close down again–this time permanently.  I vaguely remember some controversy surrounding the last owner and how he sold yearly membership contracts to the very last day it was open.  The guy was cute and he was sweet, so the big stink was that he somehow took the money and ran with no legal prosecution. I’m not sure of the details, so don’t quote me on it.

Anyway, most people don’t really give a shit, but the old Athletic Club gym is one of those tiny specs  of West Hollywood history.  I certainly remember hanging out there, I was employed  there, but for some reason I don’t remember ever working out there, which is telling as to why that space never heard the dropping of a single dumb bell again.

It remained empty for almost 15 years until it was bulldozed completely a few years ago.

And the rest as they say, is herstory.

PS: A special thanks to thehissfit reader Alan Light for allowing me to use his photos for this here blog.  He’s a photographer who used to vacation in West Hollywood back in the 80’s and 90’s  He documented his visits here and captured a lot of vintage West Hollywood moments.  I can’t wait to share them with you in future blogs.