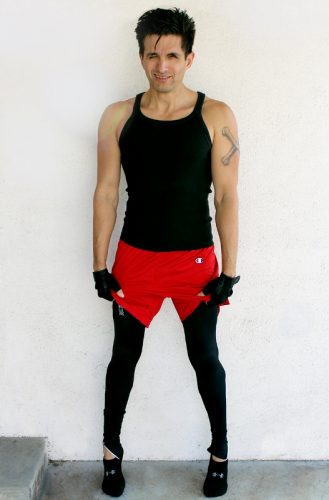 I recently joined the LA Fitness gym on La Cieniega Blvd and 18th street (never you mind), which happens to be one of THE straightest, most testosterone fuel-injected gyms I have ever experienced on the south side of Melrose Ave.  That gym is a sweat box for black/brown/Jewish/Armenian male members who huff and puff and grunt while getting their manly, meaty pump on–a far cry from the style and sophistication of the WeHo 24-Hour Fitness, let me just tell you, but I’m saving those comparisons for a different Hiss Fit.

Anyway, I could not help but notice that a lot of these straight dudes walk around wearing black tights underneath their workout shorts.  Watching a pair of manly legs wrapped in black spandex makes me realize that this is yet another one of those fashion trends that I just don’t understand.

Now,  I’m not one to tell people what to wear,  don’t-get-me-wrong, but seriously though…guys in tights?  That shit can’t be right.  Or can it?  My ass would’ve gotten a thrashing for wearing footless leggings, growing up in Inglewood.  The beatings would start at school and then I’d get another beating at home.  No doubt.  Yet, it’s become the norm to see guys walking around in skin-tight stretch pants with bare ankles sticking out.

I understand why women wear black tights.  Tights can be slimming and shape defining.  I understand why tights are common in the world of dance for the sake of movement.  I can see tights being used at a Renaissance Fair by someone playing a jester.  I get that tights are a common thing in the equestrian world, or how they are a benefit for guys on bikes.  And I even get that men wore tights in the days of King Henry VIII of England, so that noblemen could show off their gams.  However, I can’t wrap myself around the concept of men in Los Angeles, circa 2014, wanting to wear black tights to make some sort of sporty fashion statement at a gym–especially a raggedy gym like the LA Fitness by 18th Street .

Guys can’t be squeezing their lower half into black tights for comfort’s sake.  It does not feel good having your huevos all mashed-up against the center of your wishbone–not to mention, killing your sperm count with the heat that wafts from down there when you add a layer of workout shorts.  It is not a good feeling.

Maybe I’m missing something here, but the trend can’t be catching on because it looks good.   I see those footless tights and I can’t help it:  I think of a ballerina boy.  I think of someone with a medical condition of sorts, or someone who wants to look skinny.  Honestly, my mind mostly gravitates towards an image of a prancing Mini Mouse at Disneyland. 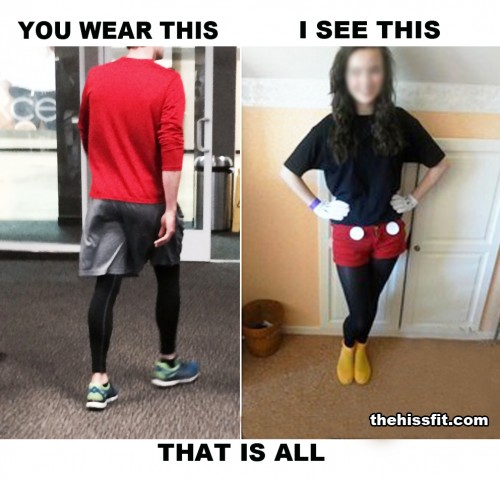 Turns out, Mini Mouse isn’t the reason why guys wear tights underneath their sporty shorts.  The look started with professional basketball player Kobe Bryant back in 2006 .  He worked some ankle exposing tights on the court or field or whatever you call that open space where grown men throw balls into a hoop.  He wanted to avoid chaffing his thighs from all that running and jumping (clever), so he took a chance with some black tights.  Other basketball players started doing it, but it looks like the tights look is really trending a good seven years later—either that, or I’m just noticing this trend for the first time…a good seven years later.

I borrowed a pair from a friend to see what the fuss was all about, and those fuckers were hard to squeeze into and every bit as uncomfortable as I imagined they would be–except I didn’t expect them to be so damn itchy.  They did give off the illusion of a booty, but the boys were pushed so far up into my groin that I had zero signage where a package ought to be. Then I put the shorts over the tights and lost was the illusion of a nice backside.

Do women find this sexy? 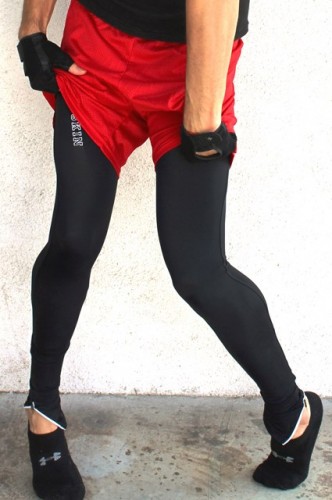 I’m sorry Kobe, but black tights on guys are not a cute sight.  To make my point, check out the hilarious video below.

ABSOLUTEMADONNA WEBSITE TO SHUT DOWN AFTER 18 YEARS LEATHER PEDIGREE