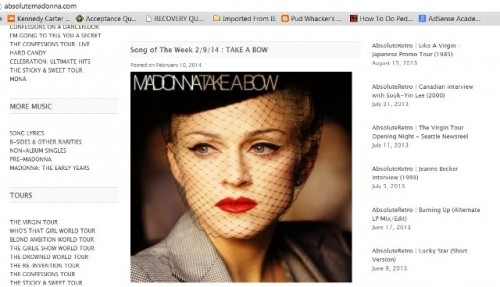 I just learned that the website absolutemadonna.com will shut down at some point tomorrow, February 28.   The website originally started as madonnaland.com in 1996 and changed to its current name in 2000.  Absmad’s claim to fame was the Express Yourself forum, which included a Madonna Tawk thread and a Free For All page where people could gush about everything M related and bitch-bitch-BITCH about everything else that ranged from Janet, to Kylie, to Britney, and don’t you DARE mention the name Gaga–those pages would last for DAYS!!!

The “tawk” forum used to generate a shit load of hits in its Hey Day.  The number of hits have dwindled over the years and I think the lack of attention is the real reason why the website is biting the bullet—Bang-bang!

“I’m not much interested in running a Madonna site for the purpose of delivering Madonna news,” says the website’s moderator Captain Jay. “The Madonna news of late isn’t the Madonna news that captures my attention at all.  But I still love Madonna, and I have a fondness for her work. I’m not any less of a fan than before, but re-posting Instagram photos, and Art For Freedom updates, or gym openings, isn’t my cup of tea.”

The reason why I’m posting this on this here Hiss Fit is because I used to love letting those little bitches HAVE IT back when this website generated its fair share of traffic!  I used to get into it with everyone and anyone and loved to play on the member’s names.  For example, Hellfire was Hellflamer (I absolutely HATED that queen), and there was Amazing Guy–a hardcore Madonna fan who swore he was straight–so of course, I would call him Amazing Gay (that guy was Madonna obsessed, but his real crime in my eyes was how he always managed to land front row seats in every single M concert).  I would come on and it was a “get some popcorn” moment, because I HAD to be right and I HAD to have the last word.

The thread was called Express Yourself, but I can’t tell you how many times I was deleted and banned for my unique and uppity approach at self-expression.  I had to come up with a new identity, but would always end up in a fight with Hellflamer  and I’d get banned again (LOLing)—oh yeah, and irony of ironies, Hellflamer turned out to be some bitchy queen named Paulo from Brazil, can-you-believe-that-shit?

I would eventually get what is called a life, so I stopped posting and would check in from time to time.  Years would by.  My account wasn’t even valid when I decided to check up on the Tawk a few months ago, so I had to create yet another identity, only to face the end of the road.

Captain Jay started a new website called todayinmadonnahistory.com, which is nowhere close to anything catchy like the Absolute name and more like a generic tumbler blog.  My biggest pet peeve with his new venture is that he is pretty much blasting M into a thing of the past, like she’s some old relic that should be appreciated for what was, not for what’s to come; her career is pretty much history.  By burying the website, he’s basically burying Madonna, but such is the love/hate affair that has always been Madonna and fan.

I know absolutemadonna.com is hardly pressing news with so much shit going on in the world, but I had to give it a formal goodbye on this here Hiss Fit.  The forum was fun and it had its place for me back in the angry years, but people do move on and so does life.

On and on and on the beat goes…