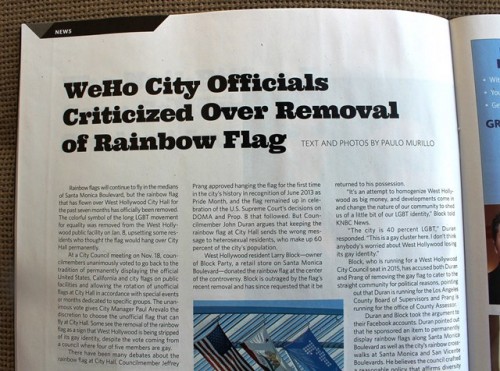 I wrote an article about the latest rainbow flag controversy, which was also published in the latest issue of Frontiers Magazine.  Since the publishing of this article, city officials have decided to rethink their removal of the gay rainbow from City Hall.  A rainbow of sorts will go up at City Hall, we’re just not sure if it will be an actual rainbow flag or a city flag with rainbow colors.

The story behind the shit storm that started it all is below. 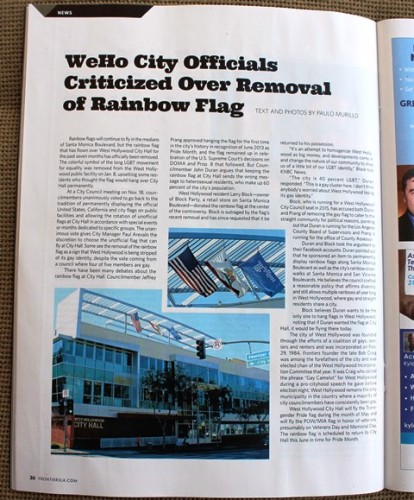 Rainbow flags will continue to fly in the medians of Santa Monica Boulevard, but the rainbow flag that has flown over West Hollywood City Hall for the past seven months has officially been removed. The colorful symbol of the long LGBT movement for equality was removed from the West Hollywood public facility on Jan. 8, upsetting some residents who thought the flag would hang over City Hall permanently.

At a City Council meeting on Nov. 18, councilmembers unanimously voted to go back to the tradition of permanently displaying the official United States, California and city flags on public facilities and allowing the rotation of unofficial flags at City Hall in accordance with special events or months dedicated to specific groups. The unanimous vote gives City Manager Paul Arevalo the discretion to choose the unofficial flag that can fly at City Hall. Some see the removal of the rainbow flag as a sign that West Hollywood is being stripped of its gay identity, despite the vote coming from a council where four of five members are gay.

There have been many debates about the rainbow flag at City Hall. Councilmember Jeffrey Prang approved hanging the flag for the first time in the city's history in recognition of June 2013 as Pride Month, and the flag remained up in celebration of the U.S. Supreme Court's decisions on DOMA and Prop. 8 that followed. But Councilmember John Duran argues that keeping the rainbow flag at City Hall sends the wrong message to heterosexual residents, who make up 60 percent of the city's population.

West Hollywood resident Larry Block"”owner of Block Party, a retail store on Santa Monica Boulevard"”donated the rainbow flag at the center of the controversy. Block is outraged by the flag's recent removal and has since requested that it be returned to his possession.

"It's an attempt to homogenize West Hollywood as big money, and developments come in and change the nature of our community to shed us of a little bit of our LGBT identity," Block told KNBC News.

"The city is 40 percent LGBT," Duran responded. "This is a gay cluster here. I don't think anybody's worried about West Hollywood losing its gay identity." 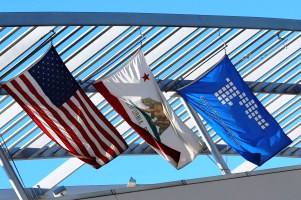 Duran and Block took the argument to their Facebook accounts. Duran pointed out that he sponsored an item to permanently display rainbow flags along Santa Monica Boulevard as well as the city's rainbow crosswalks at Santa Monica and San Vicente Boulevards. He believes the council crafted a reasonable policy that affirms diversity and still allows multiple rainbows all year long in West Hollywood, where gay and straight residents share a city.

Block believes Duran wants to be the only one to hang flags in West Hollywood, noting that if Duran wanted the flag at City Hall, it would be flying there today.

The city of West Hollywood was founded through the efforts of a coalition of gays, seniors and renters and was incorporated on Nov. 29, 1984.  Frontiers  founder the late Bob Craig was among the forefathers of the city and was elected chair of the West Hollywood Incorporation Committee that year. It was Craig who coined the phrase "Gay Camelot" for West Hollywood during a pro-cityhood speech he gave before election night. West Hollywood remains the only municipality in the country where a majority of city councilmembers have consistently been gay.

West Hollywood City Hall will fly the Transgender Pride flag during the month of May and will fly the POW/MIA flag in honor of veterans, presumably on Veterans Day and Memorial Day. The rainbow flag is scheduled to return to City Hall this June in time for Pride Month.