THE OPPOSITE OF CUTE STYLE 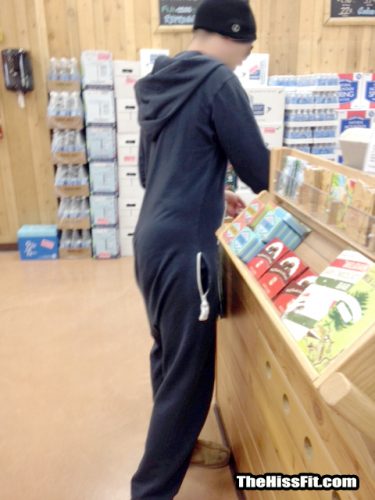 I can NOT believe what I witnessed at Trader Joe’s today.

My ass saw a grown-ass man going about his shopping   business while wearing what I can only best describe as a baby onesie that was specially designed for someone overgrown.

I had to do a double take, cuz at first glance it looked like he was wearing some long Little-House-on-the-Prairie johns, or maybe some cotton overalls, but that couldn’t be, because overalls were banned within the West Hollywood city limits back in the 90s (with exemptions applying to local lesbians).

Yep, he was wearing a onesie people—A ONE-SIE!!! It was seriously a one piece number with a hoodie attached to it and a big white zipper that went down the front (UGG boots and ski cap in 75 degree Los Angeles weather, not included).  I could not get over the saggy/dookie bottom and the big boy pockets.  It gave a whole new meaning to the words Peter Pan Complex.

If this was some club kid on his way to a taping of The Jerry Springer Show, or a guy dressed as an elf on his way to a mall, then I could maybe understand, but this was no club kid or Sata’s elf.  The guy was giving us casual frump on the go.

They warned me the moment would come when I would feel completely out of touch with today’s youth (except the guy was old enough to know better).  If onesies become the next big trend, then this is that moment.

Of course people should wear whatever the fuck they want.  My only hope is that the next time I see one of these big boy numbers, it’s on someone who’s a little less lumpy.