FIGHT FOR YOUR LIFE – THE MAX PHOENIX EFFECT 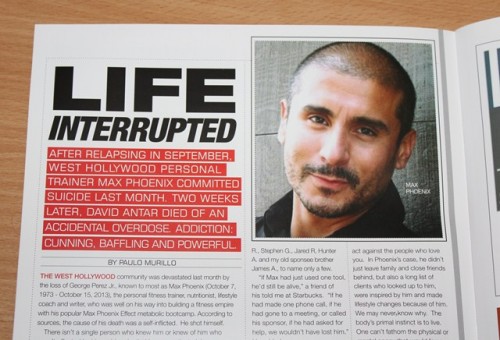 Here’s a ditty I wrote for the latest issue of The Fight Magazine concerning the recent death of trainer of Max Phoenix.  I told my editor I was the last person who should write about Max; I was nowhere near his inner circle, but he figured the distance made me the best person to write this.  I originally passed on the story idea, but then we had a second death in the local recovery community, which inspired me to write something–ANYTHING on the subject of suicide and addiction and drug overdoses.  Local media — both print and online didn’t find these deaths noteworthy, so I’m glad I wrote this piece.

The holidays are upon us.  Sadly, more guys will most likely die before the year ends.

The latest issue of THE FIGHT is out now.

The West Hollywood community was devastated by the recent loss of George Perez Jr., known to most as Max Phoenix (October 7, 1973 "“ October 15, 2013), the personal fitness trainer, nutritionist, lifestyle coach and writer, who was well on his way into building a fitness empire with his popular Max Phoenix Effect metabolic boot camp. According to sources, the cause of his death was a self-inflicted. He shot himself.

There isn't a single person who knew him or knew of him who wasn't affected by his sudden death. The Max Phoenix effect I got was what he let most of us see on his Facebook page. I secretly envied his focus. He was motivated; he was caring, positive, encouraging and full of gratitude. I never witnessed him have a meltdown. He looked good. I guess appearances can be fatal.

The first time I noticed his name, was through his writing. His topics ranged from health and fitness, to living with HIV/AIDS and his life as a recovering alcoholic addict. He mainly wrote about his battle with crystal meth. The last time I would see him alive was when he celebrated four years of continuous clean and sober time during the summer.

According to those close to him, he relapsed in the early part of September. Then on October 16, at 10:30 a.m., I would receive the following text: "Holy shit," it read. "Max Phoenix is dead?"

The long list of messages expressing sadness and disbelief poured up and down his Facebook timeline (the obituary of modern times), confirming his passing. His cause of death was so shocking that it makes one suspicious of everyone. If Max Phoenix can kill himself, then anyone can, without warning, rhythm or rhyme. I now find myself wondering what darkness lurks inside those shiny happy, self-possessed gurus on Facebook who go on and on about gratitude, gratitude, rah-rah-rah. 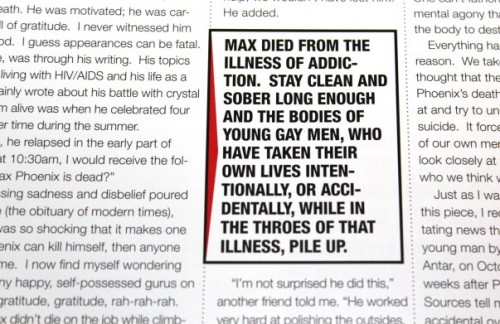 It doesn't matter how we slice it, Max didn't die on the job while climbing a mountain and he didn't die from complications of HIV/AIDS. As far as most people are concerned, he died from the illness of addiction. Stay clean and sober long enough and the bodies of young gay men who have taken their own lives intentionally, or accidentally, while in the throes of that illness, pile up. I don't know too many guys who die from HIV/AIDS these days, but I do know lots of guys whose souls were taken from us by the plague of substances abuse. I'm referring to Will R., Brian P, Ken R., Stephen G., Jared R, Hunter A. and my old sponsee brother James A., to name only a few.

"If Max had just used one tool, he'd still be alive," a friend of his told me at Starbucks. "If he had made one phone call, if he had gone to a meeting, or called his sponsor, if he had asked for help, we wouldn't have lost him." He added.

"I'm not surprised he did this," another friend told me. "He worked very hard at polishing the outsides, but he refused to do any work on his insides. He was an empty vessel. Recovery is an inside, job. This is why we do the work. We don't drink or use no matter what, and we don't kill ourselves."

They say suicide is a violent act against the people who love you. In Phoenix's case, he didn't just leave family and close friends behind, but also a long list of clients who looked up to him, were inspired by him and made lifestyle changes because of him. We may never know why. The body's primal instinct is to live. One can't fathom the physical or mental agony that would force the body to destroy itself.

Everything happens for a reason. We take comfort in the thought that the pain is no more. Phoenix's death allows us to look at and try to understand death by suicide. It forces us to take stock of our own mental health and to look closely at those around us who we think we know.  We are vigilant, especially around the coming holidays.

Just as I was ready to submit this piece, I received the devastating news that we lost another young man by the name of David Antar, on October 28, only two weeks after Phoenix's passing. Sources tell me he died of an accidental overdose. That is the power of this disease. It is cunning, baffling and powerful.