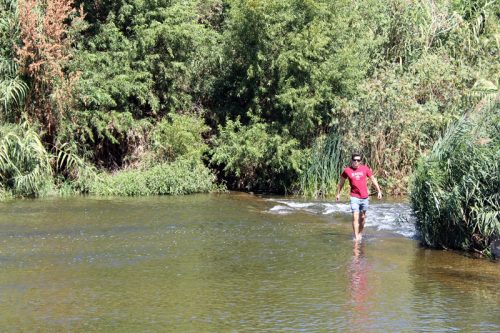 I like to do things.  I like to go places.  When my friend suggested we hit up the L.A. River by Downtown Los Angeles in search of something a little different, I was like, “There’s a river in Los Angeles?  For real though?”

We hopped on a bus and headed waaayyy east of West Hollywood towards Downtown L.A. with a connecting bus that dropped us off in  some place known as Frogtown, which is in Elysian Valley somewhere in Central Los Angeles.  I thought we were going to walk alongside a concrete channel that leads to some dry reservoir, but I was immediately surprised by the giant thickness of wild greenery and the calming sounds of flowing water in the middle of a city where industry meets suburbia.  It was a weekday, so the area was pretty empty.

Hello Los Angeles River!!!  Of course, it’s not to be confused with El Rio Grande or El Rio Bravo Del Norte which is what amigos are forced to brave to get across the Mexico/United States border.

According to Wikipedia (I’m just gonna copy and paste, cuz my ass is too damn lazy for rewrites): “The  Los Angeles River  (also known as the  L.A. River) starts in the  Simi Hills  and  Santa Susana Mountains  and flows through  Los Angeles County, California, from  Canoga Park  in the western end of the San Fernando Valley, nearly 48 miles (77  km) southeast to its mouth in  Long Beach. Several  tributaries  join the once free-flowing and frequently flooding  river, forming  alluvial  flood plains  along its banks. It now flows through a concrete channel on a fixed course.

Environmental groups  and park advocates support the removal of concrete and the restoration of  natural  vegetation  and  wildlife. There are also plans for a series of parks along the river’s city frontage in  Los Angeles. The Los Angeles River also flows through several Los Angeles County communities and has been featured in many  Hollywood  films.

Before the opening of the  Los Angeles Aqueduct, the river was the primary source of  fresh water  for the city. Although the Los Angeles region still gets some of its water from the river and other local sources, most comes from several aqueducts serving the area. The river suffers  pollution  from  agricultural  and  urban runoff.” 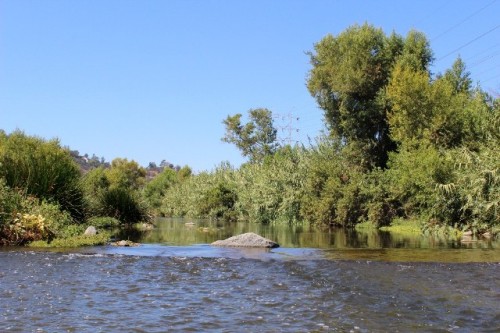 And speaking of “urban runoff” … I dared to go into the water because I’m adventurous like that.

“I don’t know if you should do that,” my friend said, looking around nervously while I removed my shoes and hiked up my skirt–err, I mean my shorts. “You don’t know what’s in that water,” he added cautiously.

I was like,”Take the damn photo!”

And he was like, “Give me your phone. I don’t want to hear you moaning about how you lost your phone in the LA River.”

I gave him my camera and all my valuables.  He knew that if he started clicking away that he would never get me out of the water, so he humored me with some rushed shots–some of which were not worthy of getting my feet wet. 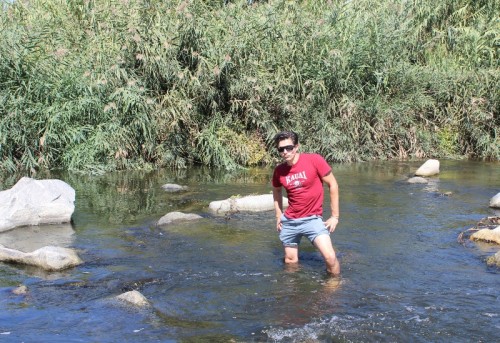 I gottah tell you, dookie or no urban dookie, the water was crystal clear and it felt so damn cool.  To quote a trashy white girl from Watts, “It looked clean.”

I went in no deeper than my knees.  Concrete boulders made the ground unstable, and certain sections looked like they were tits-deep.  I realized this is how people get caught in those flash floods that make the news where you see people’s heads bobbing up and down inside a canal while rescue crews form a human chain to try to fish people out of dangerous waters.  It seriously gives me the salties when I think about how some of these people get sucked into a man hole and the newscaster reports that they would search for the body after it washes up on the other side.  Yep, my ass got out of the water real fast after my mind went there.

I heard a train in the not so far off distance and it seriously felt like were were in a different country and not 45 minutes from where we live.

There weren’t any frogs in Frogtown.  There is supposed to be a lot of wildlife at the LA River.  We did see a crane and a some sort of hawk and we ran into random joggers along the paved canal–none of who were anything remotely cute, but keep in mind that this is Downtown LA.  The only frog I saw in Frogtown was on a mural, which was kinda/sorta cute. 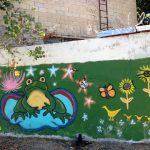 And that concludes my Los Angeles River adventure.  I hear it’s pretty happening on the weekends.  For all its bad rap about it being dirty on account of it’s Downtown Los Angeles adjacent, there was a lot of signage that referenced kayaking, inner-tubing and even swimming in certain areas, no differently than what one would do in any other river across the U.S.  It’s definitely worth giving it a visit.  Be sure to get your feet wet.

Below are some pics.  Ain’t they perdy? 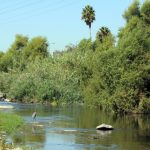 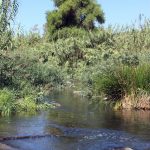 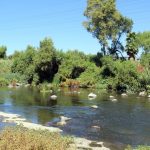 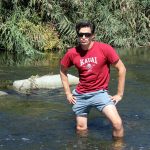 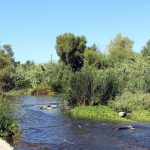