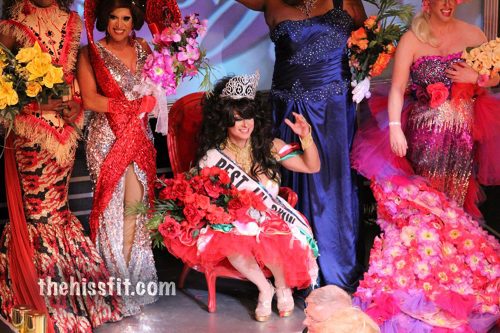 I have a drag queen hangover after attending last night’s 11th Annual Best in Drag Show beauty (or the opposite of) pageant at the Orpheum Theater in downtown Los Angeles, and I didn’t even do drag.  I can’t begin to describe last night’s competition where trucked up men in dresses tuck and pluck and pull and fluff and strut to battle it out for a tiara to raise some big bucks for Aid for AIDS–a Los Angeles charity that helps provide housing for men, women and children living with HIV/AIDS (for more information, or to make a donation visit,  www.bestindragshow.org).

The 2013 contestants include some people I know and love such as Miss Pureto Rico, Mimi E (Mike Cativo who gave you some high-pitched realness and Sheila E. fierceness); Miss New Jersey, Vava Fanculo (Stephen Malinaro plays an Italian big boobed and big bootied bitch who should check for severed horse heads under her blankets after the way she took Italy to high camp last night); Miss Wisconsin, Misty O’Portunity (Aron Ross gave us big poufy platinum pageant hair, bedazzled gowns and an AIDS Quilt and then she let us have it with a song she sang from inside of a tree); Miss Washington D.C. Ciera Lyon (Dajuan Powns gave it to you gracefully and professionally; she was very Iman meets Grace Jones and has a nasty claw fight with Naomi Campbell); Miss California, Beverly Center (aka Sash Carl, gave us big whorie red lips and a big operatic voice to match); and finally Miss Michigan, Electra Caprice Riviera (aka D’Nez Westmoreland, gave you clear hooker heels and a pace maker; she was on that stage to speak of living life to the fullest; she got a second chance at life after she had heart problems).

This is the 4th year I attended the Best in Drag Show and this year’s show is the best one yet.  I figured Miss New Jersey’s Vava Fanculo was fixed to win after she was singled out for the cover of Frontiers Magazine, but the bitch earned that crown fair and square.  Granted she was a fine mess and fell apart in the swimsuit competition and almost fell apart during the evening wear portion of the show, but the bitch served it and brought the house down with a talent that had everyone on their feet screaming their heads off.  Like I said, I’ve only been attending the show for the past four years, so I can only compare this to those last four shows, and I’ve never seen anything like it.  There was a lot of talk about the talent competition.  Expectations were high.  Miss New Jersey came on and started finger painting a black canvas like some special person who missed the short bus.  People were scratching their heads.  I didn’t know where this was going.  I wondered if we were going to get an elephant on stage with a paint brush to help her finish a masterpiece, but the magic happened when she turned that canvas upside down, which turned out to be a right-side-up painting of Marlon Brando as The Godfather.  She painted his face upside down in less than 3 minutes. Fucking brilliant!

THEN there was an awkward fight over the painting shortly afterwards.  A guy offered to pay $2,500 for it and Melanie Griffith started a bidding war which ended at $10,000.00 to some guy named Mark Honzel.  The entire house went insane. 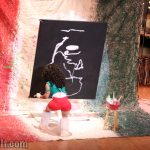 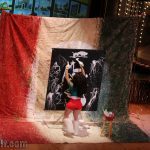 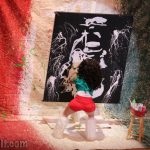 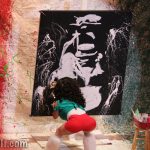 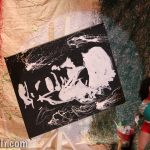 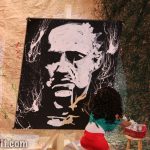 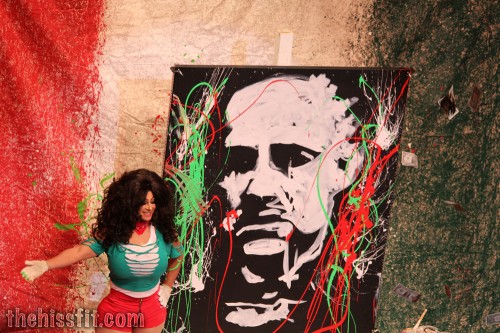 They should have given New Jersey the crown right then and there.  The real battle was for second place after that talent, which went to Miss Wisconsin’s Misty O’Portunity with Miss Washington D.C. in 3rd place, followed by Miss Puerto Rico, and there was a sad tie for last place with Miss California and Miss Michigan.

I was rooting for Miss Puerto Rico. She never broke character and I loved her AIDS Ribbon gown.  Oh yeah, and her voice gave me a case of the giggles.  I ran into her days before the competition and she mentioned that the talent was tough this year.  And she was right.  Miss Washington’s dancing and Miss Wisconsin’s singing blew poor Puerto Rico’s drum set out of the stage. 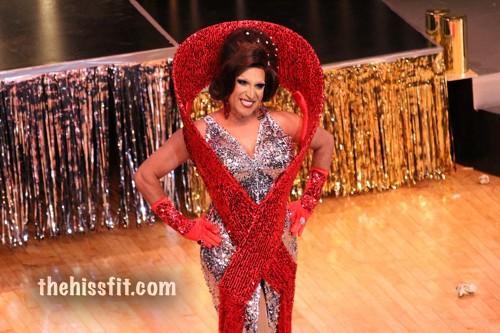 The show ended with a final dance number by former Best in Drag Show queen Tipsy Rose Lee who did a recap of the talent that won her the crown where she does swift changes while she flutters about the stage.  It was like magic last year, but a little less magical when the crown wasn’t up for the snatching this time around.  There were glitches, blips and at one point she almost tripped.  I did however, enjoy her two backup dancers.

So much fun.  Can’t wait till next year.  Why isn’t this show being pitched to Logo?

Anyway, I took a shitload of photos, which didn’t come out to shabby considering I was sitting towards the back.  Check ’em out.