A friend of mine was eager to show me an old episode of Charlies Angels (one of the latter ones from 1979 with Jaclyn Smith, Cheryl Ladd and Shelley Hack).

I was like, “I don’t wanna watch that shit.”

He was right on.  It was Season 4, Episode 9: “Angels on Skates” which was mostly filmed in and around the historical Flippers Roller Disco Boogie Lounge that was located on the corner of Santa Monica Boulevard and La Cienega Boulevard where the depressing CVS Pharmacy now stands in the heart of West Hollywood way before the city of WeHo was even born.

“Angels on Skates” has the Angels investigating the disappearance of a young roller girl who was wheeled into a black molester van while she performed on Venice Beach.  Clues lead to Freddie Fortune’s Flippers Roller Rink, where Kris joins the skating chorus line to solve the mystery.  The backdrop is hilarious with queens wearing horrible spandex getups and doing cheesy skate stunts and boogie moves to little to no music in the background.  The dialogue is of course, HORRIBLE!  There was zero effort to hide the fact that they put professional roller skaters to bust some moves as body doubles and for the climax the Angels chase the bad guys while wearing (you guessed it) roller skates.

I am LIVING for this episode!!! 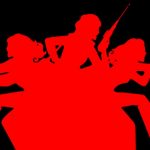 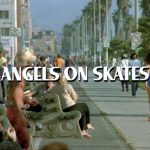 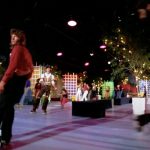 Flipper’s Roller Disco Boogie Lounge had the makings of a 70’s Studio 54 on wheels for the West coast with its velvet rope, VIP booths and celebrity guest list for the first few years that it was open (Cher is believed to have been part owner at one point and Olivia Newton John was a frequent guest).  Of course you had your rounds of cocaine, Quaaludes, PCP, Angel Dust, or whatever fucked up drugs people messed with in the late 70s.  Add strong drinks to the mix and you pretty much had people rolling around fully loaded just begging to be wheeled off the floor with ice packets pressed over injured body parts.  Flippers had a live band that played in the center of the rink with tables and bleachers around it.  This was the late 70s/early 80s, so you best believe that a lot of sexual shenanigans happened in the VIP areas upstairs.

According to a blog I found online, by some guy named Jeff Jourard, who used to be in some band called The Motels (check out  http://jeffjourard.com/Button-Flipper%27s.htm), owner Denny Cordell of Shelter Records named the place after his crazy friend Flipper.

Jourard was there for opening night: 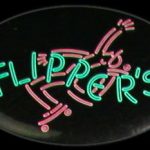 “On opening night, twelve monster seachlights lit up the Hollywood sky creating a huge scene. The exclusive vibe lasted about two years and then it just became an anybody-can-get-in kind of place and the thrill was gone. I played in a fun band called Leroy and the Lifters who played almost every week at Flippers in the middle of the rink. Drinks for the band were always free and unbelievably powerful, they were triples, at least. The Lifters were all dope fiends but nobody was on the same dope. Break time would come and we would all sneak off to the Men’s room where cocaine, opium, mushrooms, weed, hash, acid, and even heroin was ingested, it was ridiculous, nobody was listening to the same metronome, it’s a wonder we even played in the same key; I’m sure sometimes we didn’t. Nobody noticed or cared; the crowd was as smashed as we were — ever seen anybody try to skate on ‘Ludes?- and the band was just background noise anyway. One night, the late, great John Entwistle of The Who came in to raise some hell and he sat in for a couple of tunes, most notably “Louie, Louie” to which he played what can only be described as Flamenco Bass, definitely a first for that tune.” 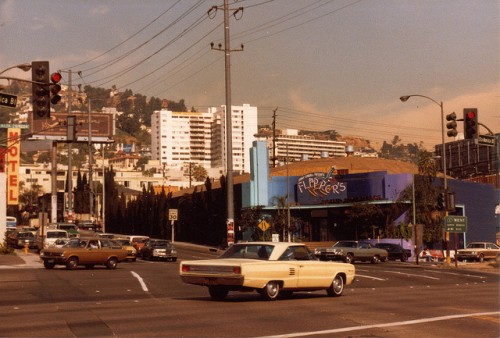 Of course, if you know anything about West Hollywood history, then you know that before Flippers, the corner of La Cienega and Santa Monica housed a bowling alley called La Cienega Lanes, which dates back to the 1940’s.  Bowling had it’s hey day and then died out to make way for roller skating.  Then disco was pronounced dead and most skating rinks soon saw their final days as well  Flippers was turned into an ESPRIT clothing store in 1983.  ESPRIT closed down in the late 80’s and it was an empty space for a while until Save-On Drugs took over.  CVS Pharmacy bought Save-On and that is what you see standing there today.

I’m not a fan of the later Charlie’s Angels episodes, but I’m a huge fan of West Hollywood history.  It was fun watching “Angels on Skates” for the horrible fashion sense alone.  I especially loved looking inside Flippers.  You get several views of the back entrance on Holloway Dr and small glimpses on La Cienega Blvd back in the day. 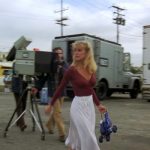 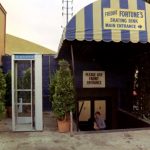 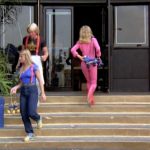 CVS pharmacy continues to pollute that corner.  Maybe one day the space will live up to its potential and become something cool again.