I woke up to a Facebook home feed lined up with link after miserable link full of commentary on Miley C’s not soon to be forgotten performance at the MTV VMA last night, which I had no idea was even taking place, on account of who gives a shit about the VMA nowadays?  I mean, like seriously, the last time MTV gave you anything worth talking about was when Taylor Swift was dogged by a drunken Kanye West in 2009, which had zero to do with a performance.

Then along comes Hannah Montana.

It took me forever to catch Miley’s performance online the morning after.  Am I the only person who found Miley C’s shenanigans a total hoot?  OK, so she pretended to dig her face up a big black girl’s ass and then tossed her head around like she was tossing some salad.  OK, so she stripped down to flesh-toned latex panties.  OK, so she aimed her panocha at the crowd and then dropped it to the ground.  OK, so she stuck her tongue out … like … a lot.  OK, so she stuck a middle finger at a sexually crippled America by sticking a giant foam finger up her coochie area, up a dancers butt and she pointed that finger at the privates belonging to a rather thick looking Robin Thicke (I was more SHOCKED by that horrible black-and-white-striped suit with the black t-shirt that could not hide his doughy gut) .  Yes, yes, Miley bent over in a down dog yoga position and then backed her ass into Thicke’s gunt–making him look that much fatter, while he pretended to pound home.  Am I the only one who found that shit funny?  Come on!!!  Weren’t the dancing teddy bears simply ADORE!!!???

Apparently everyone cares.  People are calling her a big hot mess, they are saying she’s desperate for attention, her career is over and a prissy talk show host called her mentally disturbed, which I think is fucked up.  There are even talks about a memorial service for poor Hannah Montana.  Just sad.

One review really burned me up, however.  Jody Rosen of vulture.com  went so far as to suggest in her blog that Miley Cyrus was racist for carrying on the way that she did with black folks on the VMA stage.  Rosen thinks it’s inappropriate for little white girls to claim a spiritual affinity with the likes of Lil’ Kim.  Miley C expressed a love for “hood music”–that also makes her racist—to which I say, fuck that shit and screw you Jody Rosen.  Let’s talk about racism and let’s be honest here. If Miley had been a black girl carrying on the way that she did, no one would give a shit.  If she had been Latina even, it would not be the scandal that it is right now.  Lil’ Kim wore a purple pastie to the VMAs in 1999; Diana Ross slapped that bare tit on stage and you didn’t see the modern day Huxtables–err, I mean The Smiths (as in Will and Jada) clutching their pearls and covering their mouths in total and utter shock.  Black girls will be black girls, I guess.

The same racist double standard bullshit happened when Madonna kissed Britney Spears … on the VMA stage … a whole 10 years ago.  Nobody–I’m talkin’ about not a single person gave a shit that Madonna also kissed a then dark-haired Christina Aguilera.  It’s like X-Tina wasn’t even there.  Google that shit.  You’ll find “Britney kissed Madonna” or vice-versa.  Look up “Christina kisses Madonna” and you’ll still get M and Britney in a lip lock.  I guess it was shocking watching Madonna kiss America’s blond-blue-eyed princess, but not even worth mentioning that she also kissed some Latina girl named Aguilera.  Let’s talk about racism. 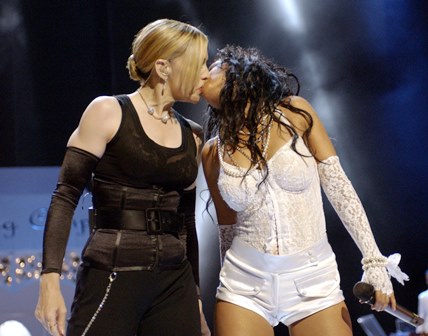 And speaking of squeaky clean Micky Mouse queens … Miley is hardly the first good girl gone bad from the M.I.C.K.E.Y. Club.  Britney did it.  X-tina did it.  And so did JT for that matter.  The more nasty, the more famous.

And speaking of Madonna … everything they’re saying about Miley today, they also said about the big M at the first VMAs in ’85.  She rolled round in a see-through wedding dress with her ass and garters hanging out and sang “Like a Virgin” while grinding and jamming a veil between her legs.  The audience was stunned into silence.  And in came the backlash: they called her a slut; they said she was trash; her career was over and they would have called her a hot mess, but hot messes didn’t exist in ’85.  THAT WAS 28 YEARS AGO PEOPLE!!! Come onnn!!!

Nope.  I’m sorry, but I don’t buy that Miley Cyrus is some racist white girl, clawing for attention, crying for help and needs to get locked up in the loony bin.  People should thank her for giving MTV the finger and giving all of us a reason to maybe tune in for next year’s VMA.  Were it not for that giant foam finger, everyone would be  talking about how neat it was to see the NSYNC boys reunited.

And speaking of squeaky clean … Taylor Swift owes her entire career to Kanye West.  Somebody came at me talkin’ about, “Did you hear what happened to Taylor Swift at the VMAs last night?”  And I was like, “Taylor Swift?  Never heard of him.”

And speaking of total bores … let me add how sorry I feel for Lady Gaga.  She is still not Madonna.

ONE GAY STEP FORWARD – ONE TRANS STEP BACK GIVE ME COFFEE DAMN YOU!!!