We’ll call her Lorena.  In her Hey Day, she was a one of those show queens at Plaza–that ghetto fab dive bar that features Mexican vaudeville drag acts lip synching to Spanish hits on La Brea Boulevard (the real fun is watching these non-English speaking divas lip synch to English hits; their lips move, but they don’t always go with the words).

By the time I was acquainted with Lorena, both our asses had been shit-kicked into rehab.  All that remained of her beauty queen days were these huge knockers and a yellowing Polaroid picture of her younger self, which she used as a bookmark for her recovery literature.  She loved to show off her little picture.  In this photo, she gave you a glamorous up-do with a giant pageant crown, sash and scepter.  She smiled a wide, bright, beautiful smile.  She would point at her pearly whites and go, “Ya ves?” Meaning, “You see?”

I could also see that meth had knocked her pretty smile right out of her face.  Literally.  One night she swore she felt maggots wiggling between her teeth through a nasty meth psychosis; she said her teeth itched, so she grabbed some pliers and knocked her own teeth out–one by one.  She didn’t do a good job.  By the time she started counting clean and sober days, she had a gummy smile with tiny chunks of broken teeth particles still stuck to the root of her gum line.  The missing teeth distorted her face, making her look older than she really was.  Needless to say, she never smiled.

I was asked to escort Lorena to the General Hospital one day.  A chunk of her tooth had infected her gums.  She was in a lot of pain.  I was so happy to get out of that damn house, but that happiness didn’t last as soon as we were out in public.  I was horrified by all the stares we got when she and I roughed it to Downtown LA via the Metro system.  She wasn’t dressed in any outlandish way that would suggest she was transgender; she held her hair up with a scrunchy, she wore a simple pink sporty top, regular grey sweats, and she hid most of her face behind large black shades.  I thought she passed for a Mexican lady –maybe not a pretty one, but she passed.  However, everyone that came near her sensed something different.  They sniffed it out of her and could not help but react to it.  They would gawk.  Teens would sneer.  And there were those that made it a point not to look in her direction.  She didn’t seem to notice or care.  That was a long mutherfucking bus ride.

The General Hospital check-in area was equally miserable.  I tried to translate for her, but of course, the asshole behind the bullet proof glass spoke Spanish, so he waved me away.  He took one look at her documentation and shook his, saying he couldn’t help her.  He pointed out that the ID was that of a man, but she was using a woman’s name.  The bitch didn’t budge.  She explained that she was a transgender woman and that she was in a lot of pain and needed help.  I accidentally overheard her give him her boy name and I must’ve gasped or something because she turned to me and gave me a threatening side-slit glance.  It was the kind of glare that warned me never to repeat that name again.  I got the message and she didn’t need utter a single word from her busted mouth.

I told everybody not to tell nobody (evil grin).

The man behind the glass finally budged and gave her a stack of paperwork to fill out.

The rest was a waiting game.  She would go downstairs and then after a couple of hours would come back out, her scrunchy in place looking at me miserably and shaking her face.  She went back downstairs  and waited to get x-rays.  She waited to see the dentist.  Then had to wait some more to get gum surgery.  She kept coming up every random hour.  She would look at me defeated and shake her head no, and then go back downstairs.  And just when it was about to be her turn, the fucking dentists went out to lunch.  She kept going up and down those stairs, looking at me and shaking her head, to say not yet.

She came upstairs again, only this time her hair was a mess.  Her scrunchy was all lopsided.  Her lips were dry without a speck of lipstick.  It looked like she had a golf ball wedged into her cheek.  Her forehead was glistening and there was a big sweat stain on her her tits.

“Ya?” I asked her even though it was obvious they had fucked her up badly.

“Did they grab you by the hair and hold you down?” I asked her in Spanish.

I remember she leaned into the nearest trash can and she horked Lordknowswhat, in a very unladylike way.

“Take care of your teeth,” she gasped. “They may be fucked up and crooked, but at least they’re all yours.”

I thought about Lorena when I sat on the dentist chair the other day.  I had four fuckers knocked out of me in one sitting to make room for my braces to move shit around.  I was only supposed to get two teeth extracted from one side of my face–one on top and one on the bottom, and then go back to get the other two, but I decided–fuck it–I was there, and I didn’t want to go back so let’s do this.  The dentist went to town on both sides of my face.  That shit hurt like hell.  I don’t wear a scrunchy, but if I did, it would’ve been all lopsided and hanging from the side of my head.

I walked out of there with gaps in my mouth; it’s been the only time since getting my braces where I was like, “What the fuck have I DONE!?”

Then a week later, my teeth lined up dramatically. 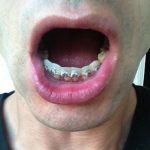 I can’t wait to see the change in a few more months.

I did run into Lorena a few years later at some recovery roundup.  She had three years of clean and sober time.  And I’ll be damned–she had a mouthful of teeth to prove it.  They looked a little too big for her face, but they were teeth and they were hers.

I remember her noticing me from across the room.  She just looked at me and she gave me a shy smile.