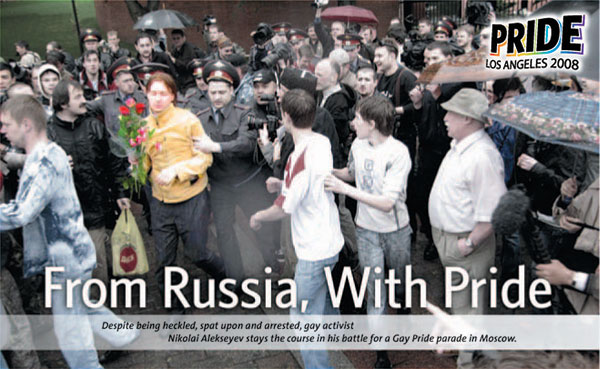 In 2008, I interviewed famous Russian gay activist Nikolai Alekseyev for what used to be IN Los Angeles magazine.  To this day, I don’t know how I found this man.  All I had was a name and the net.  I remember buying one of those international phone cards from 7-Eleven and I had to call at a very specific hour because my interview subject was in hiding.  Alekseyev and a small group of gay men were planing a bold move late Spring of that year.  A small gay march was in the works at an undisclosed location to celebrate the 15th anniversary of the decriminalization of homosexuality in Moscow.

In that interview Alekseyev talked about how things are pretty bad in Russia, but he also pointed out how they weren’t so great for LGBTQ in America.  He addressed the Don’t Ask, Don’t Tell policy, Marriage Equality, hate crimes, and federal discrimination.  He was optimistic that things would get better.   Speaking to this man five years ago, we both had no idea which way the situation would turn.   The gay march that took place late that May, 2008, didn’t go very far and only lasted a few minutes, before rainbow flags were ripped from view and gay people were viciously attacked.   It’s so damn hard to imagine things could get any worse for our LGBTQ brothers and sisters in Russia.   Meanwhile things continue to improve for us in the US.

Anyway, below is the interview that was published in the Pride issue of IN Los Angeles in 2008.

Another gay pride season is upon us.   For some it is a time for serious reflection.   For most it's about a big celebration, pull out the makeup, the wardrobe, and the wigs.   Cynics may argue that most of the gay movement in America takes place on a dance floor and more often than not, the gay fest turns into a bitch fest about a super commercialized beer fest.

Gay pride is not taken so lightly in countries like Russia, where homosexual oppression takes America back 50 to 60 years.   A march for gay human rights was recently banned for the third time in a row by the Moscow Mayor who links homosexuality to Satan.

Gay activist Nikolai Alekseyev has been in the frontlines of the Russian gay movement.   His attempts to organize gay pride demonstrations since 2006 have led to aggressive clashes with skinheads, religious zealots and Moscow authorities.   He has been spat on, heckled, subjected to physical violence, and arrested.   His fight for gay rights continues.   We were granted an interview with the Russian revolutionary after the ban of Moscow Pride "˜08.   Despite the hardships ahead, Alekseyev seems optimistic about the future legalization of this gay event–just don't call it a gay carnival.

Why choose the month of May to organize a gay pride event?
May 27th is the date when homosexuality was decriminalized in Moscow back in 1993. This year is the 15th anniversary.   We applied for all of the days of May from the 1st to the 31st, so they don't know when we're going to march.   The previous two years we advertised the date, so the opponent was well prepared.

Why did it take you guys till 2005 to get organized?
There were various circumstances.   Russia wanted to be part of European Council, but the condition was that we had to decriminalize homosexuality.   It all happened so fast after the collapse of the Soviet Union. Without a struggle, most of the leaders of the gay community lost interests.   They stopped their political activities and opened gay clubs.   We started from scratch in 2005.

When you visualize a gay pride in Moscow what do you see?
It is not a gay carnival.   We want to have our political message heard.  Our rights are being violated in this country.   We applied to have a human rights march, not a gay parade.   Society is not ready for that yet.

What type of carnivals or parades do the authorities find acceptable in Moscow?
Surprisingly, the St Patrick's parade is the only event allowed since 1992.   The Mayor personally took part in it in 92.   They block the main streets and provide security.   If you look at the images, there is nudity and a lot of craziness.   It is hypocritical to ban political demonstrations for gay people but then allow a St. Patrick's parade.

Do you think being assaulted and arrested has helped your cause?
It helped remind the authorities that we are going to fight for our right to express ourselves and to demonstrate until it is allowed, which is the right that we have according to the Constitution.   We are absolutely sure that it will all work in our favor.

Are you afraid for your life?
Fear is natural, especially when you are fighting on a very high level against the authorities here in Russia.   There's always a risk.

How does your family feel about what you are doing?
My parents will always be scared for me, but I think in the last three years they just got used to it.   Now they fully support me.

How does a Russian gay boy become a gay activist?
It was a gradual process.   It started when I was trying to do some scientific thesis on the issue of gay rights at Moscow State University, but they did not allow it.   I had to sue them in court for discrimination.   In 2005 I realized I could be more active. I had no idea so many things would happen in three years.

What are your thoughts when you hear that Americans take gay pride for granted?
I don't think there are enough political messages at these parades in Western countries.   America is still a long way from equality in terms of family rights, marriage rights, "Don't Ask, Don't Tell" policy, hate crimes, federal discrimination provisions and so on. There is still a lot to do.   Fun is fine, but it doesn't change things.   I think there's a sort of apathetic attitude because for so many years people went to demonstrate and not too many things changed.

What do you think the future holds for you?
I believe in fate.   I want things to change.   I want equal rights.   I will do the job for the time that I am needed. When I can't bring anything new, then I will stop.   Maybe I will immigrate to America. As soon as my work is done here, I will go fight over there.   I'm only joking.

MARIO LOPEZ VS. BURT REYNOLDS IN THE NUDE!!! DUMPING THE DUMP STOLI IDEA