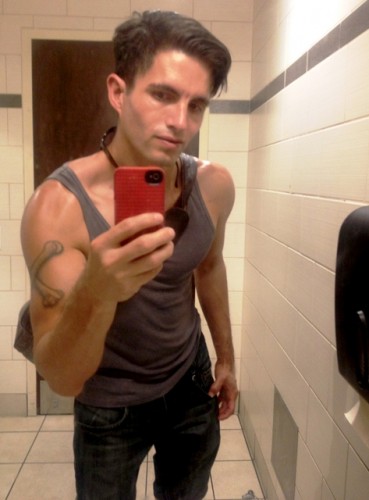 I can’t stand that moment when I have to piss like Seabiscuit, but can’t because someone inside the dookie dispenser is taking forever.  Then come to find out that the ass wipe inside isn’t exactly making dookie—nope, instead he’s in the loo having a mini selfie photo shoot while I’m outside dancing on one leg, close to pissing in my pants.

That’s how it went down at the Yogurt Stop in West Hollywood the other day.  I stood there staring at that locked door with my bladder ready to burst.  I began to wonder if the restroom was empty and started to feel pretty stewpid  (I hate it when that happens).  Then out walked this blonde young thing with big white teeth and a tight little bod wearing one of those sideless tees that reminded me of a baby bib hanging from his neck (are sideless t-shirts still considered t-shirts, or do they become tank tops?).  “Sorry dude,” he told me as he walked around me.  “I got carried away taking selfies.” He giggled and then flashed his phone my way to give me a glimpse of a pic of him flexing a bicep in the restroom mirror, but all I could focus on was the open-mouthed toilet that photo-bombed his selfie in the background.  The guy was very impressed with himself.  I had to relieve myself of some body water something fierce, so I just shook my head and closed the door behind me.

Seriously?  Who knew the public toilet would become a private photo booth?

Don’t get me wrong, I’m a sucker for some good overhead lighting that casts shadows in all the right places, so I’m guilty of indulging in a selfie … or two … or three … or more–everybody selfies–I’m just not so sure that everyone selfies in a public restroom.  I totally get that once you start clicking at your camera phone, it’s hard to stop, because you can always get a better shot, but there should be rules and time limits if you’re going at it in a public facility.

I get that some people take a long time when they blow mud in a restroom (no responsible and respectable queen should EVER blow any kind of mud in a public restroom located anywhere near West Hollywood … go to Silverlake for that kind of shit). In my opining, however long it takes you to go number 2, is the time slot you get to take that selfie shot.  If that limit expires, don’t be surprised if someone kicks your door down. 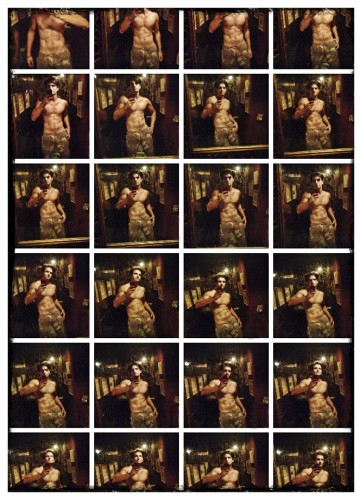 That’s how it went down for me during my last visit to San Francisco.  I was inside this dark restroom at a restaurant in the Castro; the lighting was just too damn perfect.  I straight up removed my shirt and started snapping away at my phone like some d-bag wannabe Barbizon model.  Then somebody kicked the door so damn hard, it startled me, which was way rude; you knock first then you kick.  I fished for my top and sheepishly made my way out.  This bearded overgrown queen kept his eyes to the back of the room when I walked past him.  I wanted to be mad at him, but I seriously couldn’t.  I had no kind of business doing what I did for that long inside that restroom.  Lesson learned … although those self-pics came out kinda/sorta kewt.

The same goes for anyone who thinks they can hijack a public restroom for their own self-serving and vain purposes.  It’s one of those things where people know better, but they do it anyway, kind of like how we all know we’re not supposed to flush paper towels in a toilet or smoke in a plane, yet there’s always that one asshole that comes along, so a sign needs to be posted asking people not to do the obvious.

I doubt a sign stating “No Selfies Allowed” will deter a person from hogging up a restroom with selfie indulgence.  You can’t exactly confiscate phones at the restroom door.  I’m thinking the best bet is to light a bitch sideways or from below and your selfie problem is solved.

Everyone loves a good selfie, but don’t be a douche, take your ass home for that selfie photo shoot.