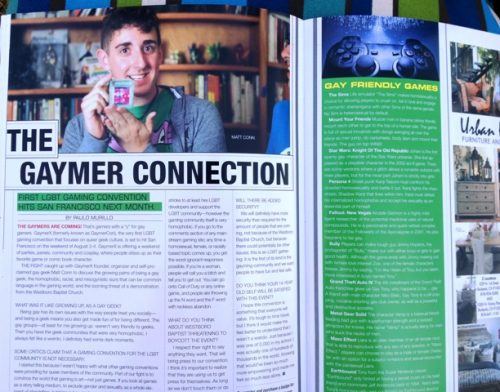 According to Miriam-Webster, a geek is defined as a carnival performer often billed as a wild man whose act usually includes biting the head off a live chicken or snake (that means Ozzy Osbourne was a geek).  Then there’s the more common definition, which is a  person often of an intellectual bent who is disliked; an enthusiast or expert especially in a technological field or activity.

M-W is not so kind to nerds either, defining a nerd as an  unstylish, unattractive, or socially inept person;  especially:  one slavishly devoted to intellectual or academic pursuits.

Whatever you may think about geeks and nerds, one thing is agreed: It doesn’t get geekier or nerdier than playing video games and attending gaming conventions where people dress up as gaming or comic book characters.   Geeks and nerds everywhere are giving Miriam-Webster the middle finger and owning all things geeky and nerdy.   Gamers are not only embracing their outer geek, but they’re also leaving the virtual world to meet like-minded geeks–however, it’s  one thing to be a geeky gamer, but it’s an entirely different thing to be a gay geek gaymer.   I reckon it sucks when you don’t feel accepted by hetero geeks for being gay, or by the some pockets of the gay community because you’re a geek. 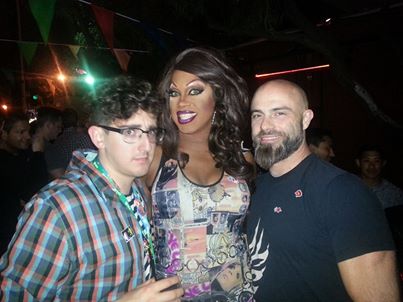 Along comes GaymerX, the first gaming convention for gay geeks, nerds, freaks and their admirers.   I interviewed Matt Conn, the founder for GaymerX for the most  recent issue of The Fight Magazine, which you can read below.   I find the gay geek element in gaming interesting–simply because the common ground goes beyond being gay; you can’t choose to be gay, but you can choose what games you play, how often you play and who you play with.  You can also choose to play in drag, decked in leather, or in a bow tie, suspenders and polyester pants.

Anyway, read the interview.  I know Matt is supposed to be a big geek, but dare I say that I found him kinda/sorta cool? 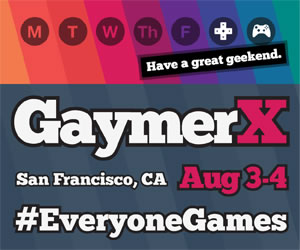 THE GAYMER CONNECTION
BY PAULO MURILLO
The gaymers are coming! That's gamers with a "y" for gay gamers. GaymerX (formerly known as GaymerCon), the very first LGBT gaming convention that focuses on queer geek culture, is set to hit San Francisco on the weekend of August 3-4. GaymerX is offering a weekend of parties, panels, community and cosplay, where people dress up as their favorite game or comic book character.
THE FIGHT caught up with GaymerX founder, organizer and self-proclaimed gay geek Matt Conn to discuss the growing pains of being a gay geek, the homophobic, racial, and misogynistic slurs that can be common language in the gaming world, and the looming threat of a demonstration from the Westboro Baptist Church.
What do expect will happen at GaymerX?
It's our first year, so it is hard to know what to expect. We can only guess.We are working with people who have experiences in this sort of thing, so we have a good idea of how we're going to be running the event.
Why are you doing this?
I think back to the 14-year-old me and how much it sucked growing up in Vermont and not having any real friends or people I could communicate with about being a queer geek. If I had known that there was going to be a big community out there like GaymerX or GaymerConnect"”I wouldn't have felt so alone. I'm doing this for the young me.
What's your definition of a queer geek?
Up until this point a gay geek has been something that has been so heavily stigmatized that people were afraid to come out as queer geeks. Being gay has its own issues with the way people treat you socially and being a geek means you also get made fun of for being different. The gay groups"”at least for me growing up"”weren't very friendly to geeks. Then you have the geek communities that were very homophobic. I always felt like a weirdo. I definitely had some dark moments.
Critics claim a gaming convention for LGBT is not necessary.
I started this because I wasn't happy with what other gaming conventions were providing for queer members of the community. Part of our fight is to convince the world that gaming is art and it's not just games. There are things that should be appreciated. If you look at games as a story telling medium, to exclude gender and sexuality as a whole element of storytelling, is taking out a very huge part of the human experience.
Is there a lot of homophobia in gaming?
I think a blunt yes would be very unfair. Most gaming companies have made strides to at least hire LGBT developers and support the LGBT community. The gaming community itself is very homophobic. If you go to the comments section of any mainstream gaming site; anytime a homosexual, female, or racially based topic comes up, you get the worst ignorant responses possible. If you're a woman, people will call you a bitch and tell you to get out. You can go onto Call of Duty or any online game, and people are throwing up the N word and the F word with reckless abandon.
What experience do you hope people will get from GaymerX?
The number one goal is to have a safe space for people part of this community to get together and meet one another and chat. I'm also hoping this will be a dialogue starting off point.
How much is cosplay a part of these gaming events?
I'm hoping cosplay is big part of the convention. We're gonna have contests with celebrity judges. I'm hoping that people go all out. This is a chance for people to be fabulous, dress up and have fun. If you're into cosplay, this is the spot. There will be media attention.
What do you think about Westboro Baptist threatening to boycott the event?
I respect their right to say anything they want. That will bring press to our convention. I think it's important to realize that they are using us to get press for themselves. As long as we don't touch them or do anything illegal, it's fine. They make a whole career out of suing people. I expect it will be a show.
Will there be added security?
We will definitely have more security than required for the amount of people that are coming, not because of the Westboro Baptist Church, but because there could potentially be other issues; this is an LGBT gathering; it is the first of its kind in the gayming community and we want people to have fun and feel safe.
I'm sure it's taken a village to put this event together. Who are the people behind GaymerX?
We have a team of over 15 people working on this. The entire GaymerX team has really made this happen. Kayce Brown – Director of Business Develeopment, LGBT master – is in LA helping out with groups like LOGO, HERE Media, GLAD and Forever Project and connecting us to the LGBT community. There's Andrew Evans "“ CTO who built gaymerconnect.com and Toni Rocca – Community Director "“ who's been there from the beginning putting together the kickstarter, he's more connected to the LGBTQ gayming communities and has helped me understand the approach about the issues we're looking to discuss.
Do you think your 14-year old self will be satisfied with this event?
I hope this convention is something that everyone will value. It's tough to time travel, but I think it would make me feel better to understand that I wasn't a weirdo. Just because I was one of 2,000 in my school, I was actually one of hundreds of thousands in the world. Knowing that would've been so much more empowering and made me feel so much less alone.
To register and purchase a badge for GaymerX, visit gaymerconnect.com (use the discount code "thefight" to get $10.00 off at checkout).
Minimize
Close
SELENE LUNA – LOST IN TRANSITION – THE FIGHT MAG #SELFIE LOVE