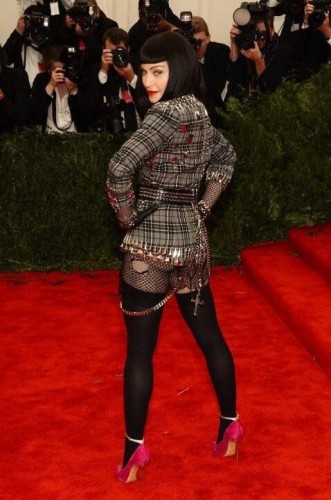 While most queens were at home, at a bar, or at a friend’s house watching RuPaul crown Jinx Monsoon as America’s Next Drag Superstar in the final episode of Rupaul’s Drag Race Season 5, there was a seasonal shift in the prevailing wind direction when Madonna showed up at the Metropolitan Museum of Art Costume Institute Gala for the “PUNK: Chaos to Couture” exhibition, doing what she does best, which was blow some pretty big A-list names like Beyonce and Gwen Stefani out of the red carpet in vintage Madonna punk couture.

The bitch let you HAVE it in studs, chains, crosses, ripped fishnets stockings and spiky hot pink fuck-me-harder hooker pumps.  The theme was punk.  Sarah Jessica Parker was arguably the only standout who stuck to the theme, while other starlets played it safe in dressy designer duds.

Jinx taking the Drag Race crown and $100k was a tiny step for a comedy queen from Seattle and a giant leap for gingers everywhere.

Monsoon season was short lived.  A ray of light prevails.

It’s all everybody who’s ANYBODY is talking about.