WHEN THE LIGHTS GO OUT IN WEST HOLLYWOOD 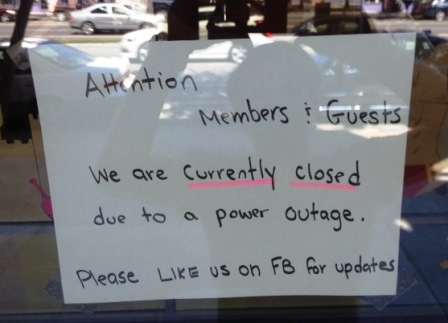 The power went out in my gayborhood the other day.  I’m talkin’ about ALL fuckin’ day.   The south side of Santa Monica Blvd, east of Westborne Dr and west of La Cienega Blvd was completely left in the dark.  And I couldn’t find a candle to see the light anywhere inside my apartment— but not a problem; I’m prepared for an emergency–I spent the night at my boyfriend’s house where there was PLENTY of light. 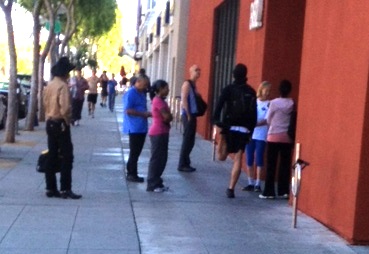 Darkness sucks, but this recent blackout in the gayborhood also meant–horror of all horrors–the WeHo 24-Hour Fitness gym was closed the entire day (we didn’t get electricity until past 3 a.m.).  Queens stood outside that gym waiting to see the flicker of light inside the building and complained that they were hopped-up on Redbull.  I witnessed new crowds gather while I sat across the street at the big gay starfucks where I charged my phone, completely hopped-up on coffee.

The blackout at the West Hollywood 24-Hour Fitness Sport took me back … waaayyy back to the days when I worked at–what was then the Sports Connection/Sports Erection/Sports Infection.  I was in my early 20’s in the early 90’s when I was promoted to assistant service manager of this huge gay sports club.  It was my first weekend flying solo as the guy in charge.  The challenges I faced that weekend were straight out of a TV sitcom.  Let’s see, I had two overgrown queens fighting over a Stairmaster (one bitch put a towel on the machine to reserve it while he went to gossip with his girlfriends, and another bitch removed that cum rag and took full ownership of this empty Stairmaster–a nasty claw fight followed).  An old lady screamed at me because the women’s jacuzzi was on its sixth month of being out of service.  I had another crazy woman scream at me because the women’s wet areas were dirty; she slammed the counter at the front desk and screamed that she got herpes in the steam room.  I had a wet hairy man stomp out into the lobby in nothing but a towel wrapped around his rotund waist to scream at me because guys were beating off in the men’s steam room (and they weren’t beating off with him).  And I was sooo over it by the time a beautiful dark haired woman named Danielle rushed inside the gym claiming men were trying to kill her.  I hid her in one of the back offices and called the police; it turned out the cops knew this woman well.  She ran away from men that weren’t there all the time.  The woman was schizo (or to use the more PC term, she suffered from schizophrenia).

THEN low and behold, I almost ripped my bangs right out of my head when the power went out in the entire building right at sunset.  It was like a joke.  My first weekend there and I had to lead an evacuation of the entire building.  The Sports Erection staff ran upstairs with flashlights to get everyone off the floor.  Of course, some of the muscle queens would not budge; they pounded away trying to get that last minute beauty pump in complete darkness—“Come on!” One overgrown pig grunted to himself.  “Donkey Kong! Give me Donkey Kong muscles!”

It took a security guard to remove some of these stubborn bitches (I don’t know HOW that place runs without security these days).  Now keep in mind that this gym was 95% gay in those dayz.  The thought of a Kidz Club was laughable back then.  So you can only imagine the horror when I realized we corralled a herd of gays away from the main workout floor and into the locker rooms downstairs—“The steam room!” I gasped.  I was referring to the men’s steam room, where you were very likely to get a severe case of herpes if you weren’t careful.  We rushed downstairs.  The men’s locker room was in pitch blackness.  We rushed into the wet areas with flashlights swinging.  I ripped that steam room door open and almost dropped my lamp.  The room was filled to maximum capacity with butt nakedness.  It was steamy alright, except the steam pumps were no longer working.  It was like a bunch of pink and freshly plucked gorillas in the mist inside.  I’m talkin’ about a scene that was straight out of the the black back room at The Zone, or The Slammer (you know the one, don’t play dumb) — “EVERYBODY OUT!!!”  I yelled in the most authoritative voice I could muster–trying to play down my lack of experience.  I stood by the door to light the way out.  Some guys placed their hands in front of them to hide their bloated shame; other guys purposely thrust their hips forward and tried to swing their boners in my direction when they passed me–I know it sound kind of hot, but that shit was seriously gross (it’s always the chunky hairy ones that wanna come at you with their swinging thingalings).

I’m telling you, that shit was just wrong.

I lost whatever pinch of innocence I had left in me that weekend.

So of course, when I see that the power is out in present day West Hollywood, I’m forced to wonder about what the evacuation process was like at this gym.  The blackout happened around 9 a.m., so the operations were in full swing.  However, the gym is not as gay as it used to be; women match the men in capacity, we now have a Kidz Club, we have one steam room that’s unisex and that steam room faces the outdoor pool, so where’s the fun in that?

Oh, who are we kidding?  I’m sure guys fucked around anywhere there was a dark corner that morning.  I’ve said it once, and I’ll say it again: if there’s a gay, there’s a way.

THE UNFUNNY CAN BE SO DAMN FUNNY SEXUAL, LEWD AND PROVOCATIVE CONTENT