THE UNFUNNY CAN BE SO DAMN FUNNY 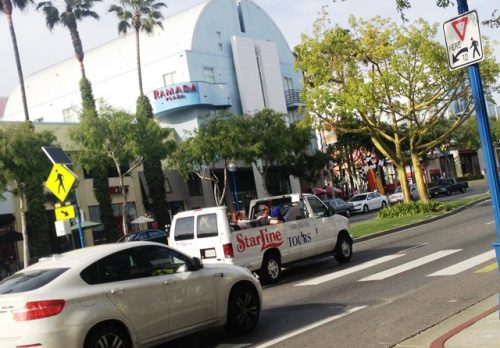 Everyone think’s they’re funny, but very few people are–and the ones who INSIST they are funny, tend to be THAT much less.

The Hollywood StarLine Tour mini buses are a very common sight on Santa Monica Blvd with those cutout rooftops that remind me of an open can of tuna, or like a mini van that was ripped wide open by a tornado.  You get your usual hostage situations with a bunch of foreigners sitting in those open shuttles looking bored while some aspiring actor or struggling comedian guides them through Los Angeles landmarks.  Most of them sing for their supper by trying to be funny.  They are not.

I walked out of the 24-Hour Fitness Sport in West Hollywood the other day when this Hollywood Star Tour mini buses paused in front of the WeHo gym—“People say Disneyland is the happiest place on earth,” I overheard the tour guide speak into a mic, “But I believe this gym is the happiest place on earth.  Look at them everybody.  Don’t they look happy?”

Then he drove off.

It happened so fast, that I didn’t know what to make of it.  Was this guy being for real?  I haven’t heard fag humor like that since grade school, where kids raised a limp wrist and called each other gaylord.

I remember back when I was a kid, these two little black girls asked me, “Hey you, are you funny?”  I remember shrugging my shoulders and responding, “I try not to be … ” Then they burst into evil little girl giggles.  Moments later my little boy mind connected the dots.  I was like, “ohhhh …”  They asked me if I was funny in that funny, funny way.

That shit was funny.  But mostly because I was/am funny in that funny way.

The tour guide however, was not.  And judging from the deadpan look from the people sitting in the back, they clearly didn’t find him funny either, or they simply did not get it.  Andddd … FAIL!!!

“I wanted to chase after that damn man in the van and shout.  “HEY SHIT WIPE!  WE CAN HEAR YOU!”

The unfunny can be so damn funny.  But mostly because they’re not.