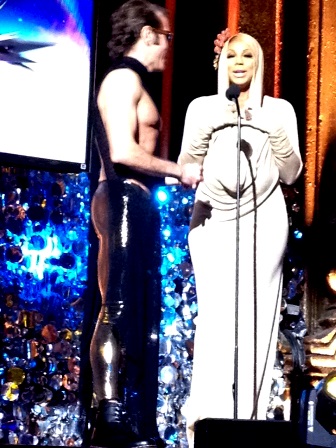 My partner was invited to attend the Logo NewNowNext Awards 2013 this past Saturday, April 12th.  He was representing the Point Foundation, which was up for an award for the Most Innovative Charity of the Year — Point Foundation (Point) is the nation’s largest scholarship-granting organization for lesbian, gay, bisexual, transgender and queer (LGBTQ) students of merit. Point promotes change through education, mentorship, leadership development and community service training, and provides its scholars with the financial ability to attend the nation’s foremost higher educational institutions.

I wanted to go, but I had NOTHING to wear; somebody stole my shiny black tights from the Hollyway Cleaners in WeHo.  I’m also missing one of my sheer curtain panels from my bedroom window (evil grin).

Point was up against Lady Gaga’s Born This Way Foundation and the It Gets Better Foundation, as well as the Astreae Lesbian Foundation for Justice, Housing Works, and OutServe-SLDN.  Of course, Point didn’t stand a chance at winning.  As can be predicted, Caca’s little monsters plugged into their fake Tweeter accounts and faux Facebook profiles to make sure enough votes were cast in her favor.  AND SHE WON!!!  In return for their efforts, Mother Monster didn’t bother to show up to the event, nor did she send a representative to accept the award on her behalf–not her mother–not the secretary–not a single member of the foundation was there to say “Gee thanks.”  This would have been a real slap in the face if this were a real foundation.

Gaga’s vanity charity winning the Logo NewNowNext Award for is not a spoiler in any way shape or form.  She didn’t bother to show, and the show didn’t bother to air this particular award.  The winner for Most Innovative Charity was announced over an intercom during a commercial break.  They saved the air time for The Most Addictive Reality Star, which is the sad state of affairs we live in these dayz.

I love my Boo, I respect the Point Foundation, but if there was any justice in the world, the It Gets Better Foundation would have walked away with the award. They spoke out against gay bullying first.  And they did it better.  I say “justice in the world” like the Logo NewNowNext Awards has any real relevance or significant impact in today’s Big Picture.

And speaking of a lack in significance.  Some of my friends couldn’t get over what a certain someone wore at this awards show. Some of those present kept texting me and asking what I thought about this fashion no-no. 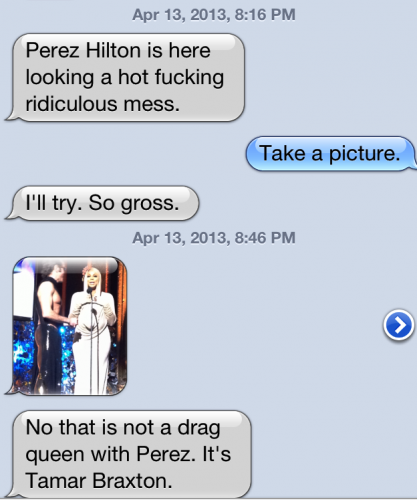 I don’t want to think about that getup.  The bitch is a daddy now.  He’s got an extra mouth to feed and diapers to buy.  It takes what it takes to keep the drivel drooling–even if it takes black tights and sheer dress/bib/rag draped around your neck.  That’s all I can say.  Lips.  Sealed.