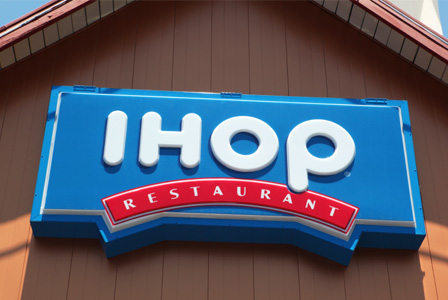 I went to I-HOP in West Hollywood the other day, and I had a total flash from the not so far away past.

This was many years ago on a weekday afternoon.  I forget why I wasn’t at work that day, and it’s not like me to venture out into having a meal by myself, but that day I was sitting completely solo at I-CRAP in WeHo.

I woke up with one nerve that morning and my waitress was definitely on it.  I asked for the “Rooty Tooty” with blueberries, because blueberries are supposed to be good for you (sans the sugar, the butter and the syrup).  I’ll never forget it; she looked at me through some heavy mascara—“Andddd?”  She asked me expectantly.  It took me several seconds to realize that she wanted me to add the words “Fresh and Fruity” to my order, which I refused to do out of principle.  She seemed annoyed that I would not play along, but I was like sooo not in the mood.

Anyway, the pancake joint was practically empty.  It was just me and some dude who was also sitting by himself at the table across from me.  Judging from the way our waitress practically offered this guy a quick hand job under the table, I gathered that this guy was kinda/sorta famous, but no one so famous that I recognized.  Of course, the girl was giggling and chatting this guy up without paying my table much mind.  And of course, he was eating it up.  I can still see her leaning on his booth and speaking to this guy as if they were intimate friends.  She was youngish and pretty if your into heart-shape-faced Latin girls with big brown eyes.  She kept referring to the last time he was at the WeHo I-CRAP.  I’m guessing he was with a group of friends, because she kept saying how his friends were nice and pointing out how she remembered them.

I could not help myself.  When she passed my table, I did the unthinkable; I asked her as softly as I could, “Who is that?”

“That’s Dane Cook,” She responded longingly. “He’s such a nice guy,” She added loud enough for him to hear, but pretend not to hear.  And by “nice” she meant “famous.”  Which he really wasn’t at the time.  And really isn’t anymore.

I almost barfed a syrupy blueberry through my nose — UGH!  If you could have seen the look on my face.  That was just gross.

So trip out on this shiiieeettt:  He asked for the bill and the bitch was like, “Oh no.  Don’t even think about it.  Your meal is on the house.  Of course I’m sure.  Just keep doing what you do.”

What Dane Cook did, or has done since, to get a free meal at I-CRAP beats the warm shit right out of me.

I don’t know if he left a generous tip to make up for the cost.  I was too embarrassed to look.  For both of the them.  And a little for myself.

He got up and left.  Then the bitch marched to my table and smacked my bill by my plate.  She looked down at me and I swear I saw contempt in her face.  I guess I wasn’t nice enough for her.

OK, so maybe the contempt was all mine.

And fuck you, you tacky-ass crappy waitress!

How’s that for nice? 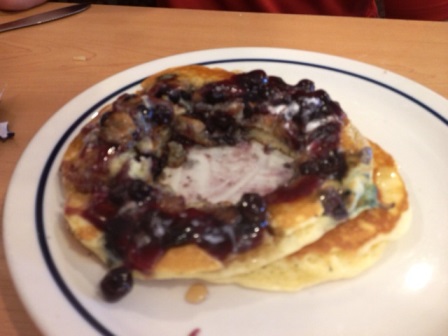