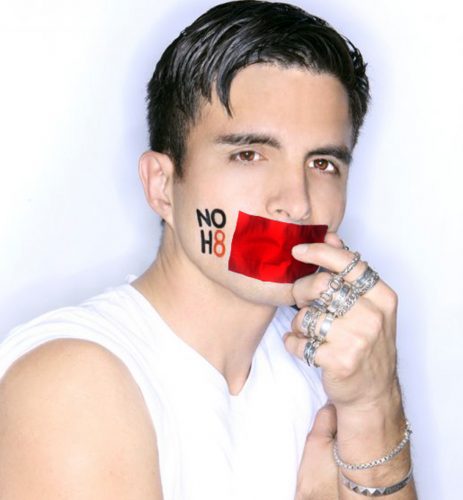 The NOH8 portrait I had taken a few years ago had me royally beat down with the healing brush tool, corrective tool, blur tool, brightening tool and  Lord knows what other Photoshop tools were used to have me come out looking like a 12-year old boy.  The picture is pretty, don’t-get-me-wrong, but I always thought the heavy hand on the airbrushing sent out the wrong message, or at least came off like–given the choice–we gays and our allies would all have lighter skin, lighter eyes and not a single age defining line on our faces … I do LOVE my NOH8 portrait.

Listening to the Supreme Court argue the case on marriage equality has been difficult–if not hurtful.  Hearing something so simple and cut-and-dry regarding our civil liberties, equality, the Constitution, non-discrimination, love regardless of gender, etc, get turned into something complicated with tongue twisting legal babble, backwards scenarios and unfair questioning has been heartbreaking to say the least.  Maybe it’s supposed to hurt.  Maybe it is the only way we learn to respect and appreciate what we’re fighting for when we finally win the battle for equality — oh, we will win; even if it takes another 10 years.  We will win.

On the other hand, how awesome is it that we get our day in court?  My partner thinks Prop-8 will turn in our favor.  However, he worries about the outcome for DOMA. 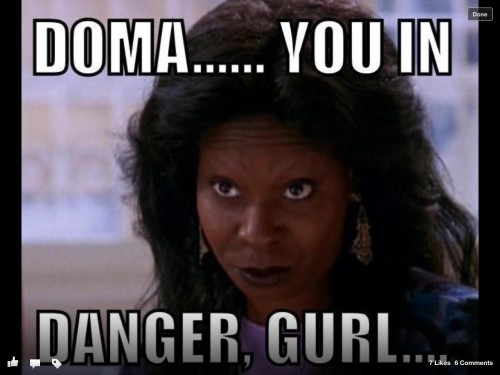 And how cool is it seeing my home feed on Facebook turn completely red in support of gay marriage?  To be completely honest, I’m not the biggest HRC fan–mostly because they didn’t really step up and fight a good fight when Prop-8 was on the ballot, they lacked the will to inspire when it really mattered, they also get a shitload of funding which and in my opinion gets funneled heavily  into branding and now that we’re close to the finish line, they will step up to get the credit.  However … I digress … the equality symbol is the equality symbol.  When I see the most unlikely people I know from my high school embrace that equality symbol, I’m forced to leave the .org out of it.  And I embrace the equality symbol for the sake of equality.

And speaking of 12-year-olds without any age defining lines on their faces … my partner’s 12-year old nephew had the following statement regarding marriage equality: 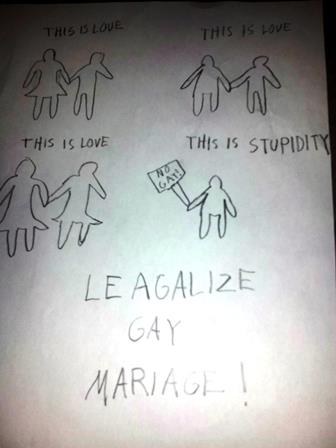 This was found in his bedroom, which he made without any coaxing or guidance.

This simple message is surely a glimmer of hope.

And it’s enough to make a grown man cry.

R.I.P. FUNNY MAN RUDY DE LA MOR LIKE IT OR NOT – MADONNA IN THE FIGHT MAGAZINE