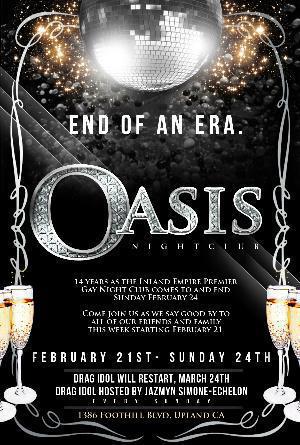 I just learned that Oasis Nightclub closed a few weeks ago.  Ain’t that some shit?  A part of me is sad that the oldest–if not the ONLY gay night club in Upland has closed its doors.  Another part if me didn’t realize the place was still open.

What I find most bizarre about the closing of Oasis, is the immediate re-opening of a club called Marguarita Rocks a few months from now.  According to The Oasis Nightclub Facebook page, the gay community is evolving.  In the spirit of evolution–not revolution, Oasis is changing into a “mainstream” club.  In comes Margarita Rocks.

“Margarita Rocks will be a place for everyone to be themselves, we will still have Drag Idol competitions and all are welcome,” reads a disclaimer by James Levine (I assume the owner of Oasis … I’m too lazy to look it up) “[However] we identify neither as straight nor gay, but as a Mainstream Nightclub. You have truly blessed us these past 14 years with enough memories to last a lifetime of lifetimes…Let’s make some more as we take this next step in the evolution of equality!” 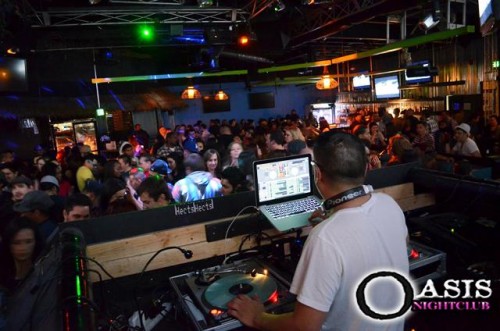 Turns out I wrote a column about Oasis Nightclub back in the summer of 2006 (my ass was in rehab 5 months after the column came out).  I called it “LAST NIGHT A DJ SAVED MY LIFE,” after the song by that 80’s new wave dance group Indeep … but my editor thought it was a grammatical error, so he called it “A DJ SAVED MY LIFE LAST NIGHT.”

It was supposed to be an ode to DJ Wes who was the resident DJ at the time (I’m not sure if the Oasis evolved him out of there six years later), but even when I tried to be nice, I came off abrasive and offensive back in those days.  The quote where I make fun of lesbian fashion no-nos was pulled and posted into Rex Wockner’s Quote on Quote syndicated column, which was then picked up by the gay media, and of course, I got into a shit load of trouble with my lesbie friends.   Anyway, below is the actual piece I submitted for publication.  There are some hints that my ass was ready to evolve.  I also mention a little known Drag Queen by the Name of Delta Work who would go on to compete in RuPaul’s Drag Race and become a HUGE STAR, which goes to show that you just never know …

“I’ll teach you how to fuck.” That was the message that was printed boldly and shamelessly on the back of my black sleeveless tee with the same font that was used in Madonna’s Sex Book (“English Roses,” my brown eye); I thought safety pins and zippers gave my shirt some edge, which was my attempt at something that should’ve been more rebel punk-rock chic than a “Drowned World” Madonna wanna-be chick (a failed attempt some may argue).

That Saturday, I was having a“there’s-gottah-be-more-to-life-than-Here-Lounge-and- The Abbey” moment, when my Pollack friend Luke invited a bunch of us to pay tribute to Madge on her 40-something birthday bash that was happening at Oasis Nightclub in a town called Upland — The meaning of an Oasis is something that provides refuge, relief, or a pleasant contrast.  I was desperate for some distinction, so of course I was like, “Shit yeah, let’s roll,”–not really knowing Upland from Downland and only caring that it was east of La Cienega—far, FAR away from Here Lounge and The Abbey.

My friends Luke, Kent and Mark dressed up as cowboys to channel M’s “Don’t Tell Me” moment.  They brought four other gays with them whose names I’ve long forgotten.  These queens stuck to their WeHo attire in aviator shades, frosted, spiky hair and they wore their A&F polo shirts with the collars turned upwards (you know the look)—I hate to go there, but homosexual men who step out of their homes in polo shirts with the collars flipped skyward need to be publicly lashed with a wet whip. Turned-up collars looked so damn stupid in the 80s and they look even more STEWPID today, cuz today we know better—unless of course you’re a lesbian, but they’ve been slicking back those mullets and flipping up their collars since god created them. And Lord knows Lesbian fashion is a gay fashion no, no (look, I don’t make the rules).

Ah shit, where was I?  Oh yes … so we crammed onto two cars and hopped on the 10 East FWY aiming toward Upland. We drove, and we drove, and WE DROVE, until we FINALLY reached a dark and rather sad-looking strip mall.  The word OASIS jumped out in neon lights from a tired little corner. This was Odd. This couldn’t be it. It was so damn quiet. “People live here?” I stole a line from Roberta in Desperately Seeking Susan when we stepped out of the car.  We hesitated on that parking lot while all sorts of differently shaped lesbians (with turned up collars), Latinos, Asians, soul sistas, and drag queens made their way inside.  It was the exact opposite of WeHo and the WeHo four looked panic-stricken (in their flipped up collars).

“I’m sensing a waste of an outfit,” I looked over at Luke accusingly.  The place looked like a total dud.  We were pissed, but then something hit me, and I was like, “hold up. We swore we wanted to do something different from Here Lounge and The Abbey, yet here we are pissed off because Oasis isn’t like Here and The Abbey? What the fuck?”

There was no turning back out of mere principle. And it’s a good thing we didn’t turn back, cuz once inside, our bottom lips hit the ground by what we saw inside.  Some queen’s entire Madonna collection exploded all over the entire club from wall to wall.  I’m talkin’ about rare posters, promo flats, picture discs, promo banners, standees, and there was rare concert footage playing in video screens. I’m talkin’ about a curtain made of rare M tee shirts spanning Madge’s entire career pinned together to cover a little stage. I’m also talkin’ about my fingertips itching to stick to some of these Maddy goodies by the end of the night when no one was looking. I pictured my sleeveless arm pulling a lever and killing the lights.  Queens would shriek with horror when they noticed the bare walls after the lights came back on—OR I could reach into my Harley boot, bust out a Derringer 32 double barrel, wrap my arm around the neck of a life-size M standee and wave my piece around as I backed away toward the exit door—“Don’t nobody move or Madonna gets it!”

Change can be scary, but necessary. We couldn’t decide if the place was a Latin, lesbian, boy, girl, hip hop, or dance because the DJ was in the mix giving us all kinds of flavas. We’re also used to getting dry-fucked and cum dumped on with a ten dollar drink at the Abbey from bartenders (hotter bartenders, admittedly) who act like their doing you a favor. We didn’t know how to respond to these cute little Latino servers (I thought human cloning was illegal) who smiled and said weird things like, “Thanks cutie” and went so far as to introduce themselves after a generous tip. I was confused.  learned the DJ is none other than DJ Wes. He”s the guy who put his entire personal Madonna collection on the line and asked everyone in the club to secure it for him, which totally fucked up my chances of running out with a giant tee shirt curtain trailing behind me. I was forced to admire Wes’s dedication to his patrons by sharing is M treasures (I would be one fightin’ bitch going, “Hey YOU! Back away from that wall! And YOU…don’t touch that!”) Even the coldest of the WeHo Four caught himself giving the DJ props.

It was on and poppin’ on the dance floor. Of course a Madonna bash is not complete without drag performers paying tribute to the Queen. Honorable mentions must go out to Bridgette, who was all mirth and girth in her rendition of “Material Girl” (someone said she needed money for more pink material — don’t look at me, I thought it, but I didn’t say it). The popular and equally pleasantly plump Delta Works kicked big ass while doing “Music” (you had to be there)—but the M crown went out to Venus D-Lite who was very convincing and a total pro with backup dancers and in sync to Madonna’s every word and vogue pose (check out venusdelite.com). I can’t speak for the WeHo Four, but Luke, Kent, Mark, and I had way too much unexpected fun. The WeHo Four took breaks from the dance floor to prop up their collars and yawn in a tired corner, which only goes to show that you can share your Madonna collection, provide diverse music, entertain with a live show, but some folks are forever limited to the walls of West Hollywood, where happiness is posing and pouting for nothing and no one inside Here Lounge and The Abbey. Spare me darrlinks.

For those not in the know, Oasis has been the only gay bar in Upland for almost 7 years. DJ Wes is the resident DJ. They have CD/DVD release parties, A Mr. Oasis contest (hhmm), and this August 28 they’re forking over $1,000 to the next Drag Idol winner (I’m in the wrong business)–not failing to mention that they’re promoting Dolly Parton by giving away free concert tickets next month. Who doesn’t love Dolly? That night a DJ saved my life. I learned to never judge a club by the front entrance (don’t believe those long lines standing outside). Change is scary but good. Doing drag pays. And Lesbians are A-OK—on a side note I later learned that Madonna is human with bones that actually break (Get well soon Esther)

Oh yeah, one last thing about my night at Oasis: I didn’t steal anything.  I SWEAR IT!!!