TILL DRINK DO US PART 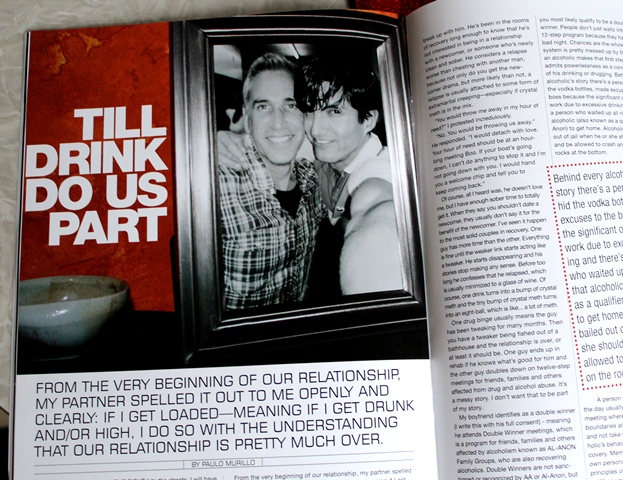 Oh yeah–almost forgot–I wrote this rather personal ditty about relationships in recovery for The Fight Magazine.  The issue is out now, so pick up a copy.

You can read the article below:

TILL DRINK DO US PART

By the time this issue of THE FIGHT hits the streets, I will have celebrated 6-years of continuous sobriety.  I have also been in a relationship that recently reached a 2-year milestone to man who has been clean and sober for almost 14 years, which is what we sobers like to call a gift of recovery, if not a freakin’ miracle.

From the very beginning of our relationship, my partner spelled it out to me openly and clearly: if I get loaded – meaning if I get drunk and/or high, I do so with the understanding that our relationship is pretty much over.  He says that if I ever decide to pick up – be it a drink or a glass pipe, I’m pretty much choosing to break up with him. He’s been in the rooms of recovery long enough to know that he’s not interested in being in a relationship with a newcomer, or someone who’s newly clean and sober.  He considers a relapse worse than cheating with another man, because not only do you get the newcomer drama, but more likely than not, a relapse is usually attached to some form of extramarital creeping – especially if crystal meth is in the mix.

“You would throw me away in my hour of need?”  I protested incredulously.
“No. You would be throwing us away.” He responded. “I would detach with love. Your hour of need should be at an hour-long meeting Boo.  If your boat’s going down, I can’t do anything to stop it and I’m not going down with you.  I would hand you a welcome chip and tell you to keep coming back.”

Of course, all I heard was, he doesn’t love me, but I have enough sober time to totally get it.  When they say you shouldn’t date a newcomer, they usually don’t say it for the benefit of the newcomer.  I’ve seen it happen to the most solid couples in recovery.  One guy has more time than the other.  Everything is fine until the weaker link starts acting like a tweaker.  He starts disappearing and his stories stop making any sense.  Before too long he confesses that he relapsed, which is usually minimized to a glass of wine.  Of course, one drink turns into a bump of crystal meth and the tiny bump of crystal meth turns into an eight-ball, which is like… a lot of meth.

One drug binge usually means the guy has been tweaking for many months.  Then you have a tweaker being fished out of a bathhouse and the relationship is over, or at least it should be.  One guy ends up in rehab if he knows what’s good for him and the other guy doubles down on twelve-step meetings for friends, families and others affected from drug and alcohol abuse.  It’s a messy story.  I don’t want that to be part of my story.

My boyfriend identifies as a double winner (I write this with his full consent) – meaning he attends Double Winner meetings, which is a program for friends, families and others affected by alcoholism known as Al-Anon Family Groups, who are also recovering alcoholics.  Double Winners are not sanctioned or recognized by AA or Al-Anon, but groups are sprouting all over the country.

They say alcoholism is a family disease. If alcoholism is in your gene pool, then chances are you qualify to be a double winner.  People don’t just waltz into a 12-step program because they had a bad night.  Chances are the whole family system is pretty messed up by the time an alcoholic makes that first step and admits powerlessness as a consequence of his drinking or drugging.  Behind every alcoholic’s story there’s a person who hid the vodka bottles, made excuses to the boss because the significant other missed work due to excessive drinking and there’s a person who waited up all night for that alcoholic (also known as a qualifier in Al-Anon) to get home.  Alcoholics get bailed out of jail when he or she should sit tight and be allowed to crash and burn on the rocks at the bottom.      A person who is always out to save the day usually ends up at an Al-Anon meeting where people learn to set healthy boundaries and take care of themselves and not take responsibility for an alcoholic’s behavior, their disease, or their recovery.  Members of Al-Anon strive for their own personal growth by using the same principles of a 12-step program.

Before sobriety, I didn’t have much time for boyfriends.  I was busy going places.  Boyfriends got in the way.  Then I cashed in my chips for sobriety, and I was confronted with feelings of loneliness and a hunger for affection that I never knew was in me.  I told myself these were side effects of sobriety, but that loneliness was always there.  I was too busy running amuck to pay these feelings any mind.

I told myself I didn’t want to date anyone in recovery, yet dating a double winner with almost 14 years of recovery time has its advantages.  He tries to stick to the dos and don’t of Al-Anon.  The dos are: Do forgive, do be humble, do take it easy (tension is harmful), do play (find recreation and hobbies), do keep on trying whenever you fail, do learn the facts about alcoholism, do attend Al-Anon meetings often and do pray.  I tend to like the Al-Anon Don’ts the most, which are: Don’t be self-righteous, don’t try to dominate, nag, scold and complain, don’t lose your temper, don’t try to push anyone but yourself, don’t keep bringing up the past, don’t keep checking up on the alcoholic, don’t wallow in self-pity, don’t make threats you don’t intend to carry out, don’t be over-protective and don’t be a doormat.  The dos and don’ts can work wonders for just about anyone.

“In Al-Anon, we have our own recovery slogans.” My partner tells me. “We can’t cause.  We can’t cure.  And we can’t control.  Not wanting to be in a relationship with a newcomer is my own personal choice.” He adds. “Sometimes the hardest, most loving thing a person in Al-Anon can do is let an alcoholic face the consequences of his choices.”

He says he would leave me if I got loaded.  I think he’s bluffing.  But I’m not willing to go down that slippery slope to put him to the test.  I love the life I live.  I love being clean and sober and I’m kinda/sorta in love with this man.