THIS IS THE ‘LES MISERABLES MOVIE SUCKS’ BLOG 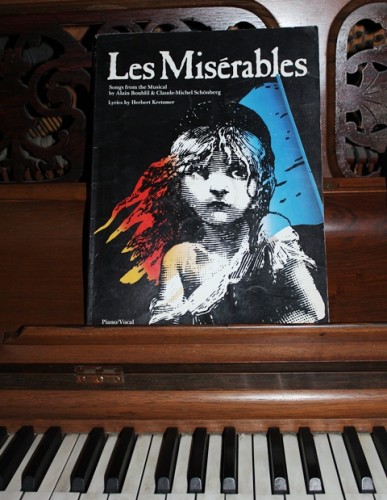 They say, “To Thine Own Self Be True,” and thy truth is, I have not been truthful when people have ask me what I think about the big-screen adaptation of the musical Les Miserable.

” I thought ‘Les Miserable‘ was French for ‘The Happy People,‘” I joke to throw people off thy truth.  “Somebody LIED to me.”

For the most part, I keep telling some of my friends who are Les buffs that the movie version is like … umm … grrrreatttt … yeah … really, really um, great.  And of course when they ask me what I like the most about it, all I can think about is a dying Anne Hathaway singing/acting (Or is it acting/singing?) about a time when men were kind.  “Yeah-yeah that’s my favorite part,” I hesitate, “Oooh, she’s gonna win an Oscar–that pretty girl that hacked her hair off on screen and sported a missing tooth.  Fer ssssure…”

Thy truth is–straight up to the muthafuckin’ head up–that I could not STAND sitting through the movie adaptation of Les Miserables–THERE, I said it (phew)!  It had it’s moments of grandeur.  The production value is amazing and I kinda like the costumes, but let’s be honest here, the subject matter is depressing as all hell, and some of the singing sounds like it’s straight out of a Disney made-for-DVD  movie, which had me feeling oh sooo les miserable as we reached the second hour of the show.  AND…though perfectly cast as a somewhat rotund, hateful, unforgiving, self-righteous officer-of-the-law, watching Russell Crowe mouth an “o” while he reached for those notes…well…that just gave me a severe case of buttcurl.  Love him in Gladiator, but for the most part I just can’t stand Russell Crowe.

I get that big stars sell movies, but just because you’re a huge star that can act–that doesn’t mean you should act like you can sing.  It smacks of screen greed ala Mama Mia with Meryl Street … which brings me to Amanda Seyfried (love her in HBO’s Big Love), who sounded like the Little Mermaid Part 2 that’s released for a limited time…on DVD.

Then there’s Borat…SINGING!  Hilarious! Watching Sacha Baron Cohen and Helena Boham Carter (both of whom I love) singing and swindling up a storm in the Les Miserable movie gave me a severe case of deja vu–that’s French for “already been seen.”  I remember those two in Sweeny Todd: The Demon Barber of Fleet Street–another musical of the stage–turned into a movie musical, where they play similar shady French characters.  They were actually the only redeeming quality of the movie, but that’s only because they were the ONLY comic relief even though I hear they killed the song “Master of the House“, as in murdered it in a bad way when compared to the stage version…pity.

My friends are nuts about this movie.  They say it’s the best movie they’ve ever seen.  They immediately bought the movie soundtrack.  They tell me that they cried and cried, and my ass walks away scratching my head and feeling like I must be dead inside.  Really?  You cried four times.  Reeeally…?  Then they want to break it down for me and tell me its meaning because I clearly do not get it—“The man changed his life around and lived a rich and full life as an honest man, raising a daughter like she was his own,” one friend tells me in reference to the Jean Valjean character (played by X-Man Hugh Jackman).  And I’m like REALLY?  NO!!!  Did we watch the same movie?  The man makes a mad dash with stolen church goods, he breaks parole, buys himself papers to change his name, swindles himself a daughter, lives his life on the run from the law, and people wanna to tell me that he lived a good life?  Oh, but NO monsieur!

I really MUST be dead inside and a total dunce, cuz that was not my understanding of the movie.  I kinda/sorta figured the obvious: he was a flawed man at best, trying to do good with the bad cards he was dealt and stuff and junk like that there.   This was an obvious story about forgiveness and redemption, and so on.  But seriously, for the most part this was a miserable story about miserable people, living miserable lives in miserable times.  And then they like…died.  Even the love story was depressing with its miserable twist where young Cossette rushes to Jean Valjean’s death bed on her wedding day.  And in comes the ghost of Ann Hathaway to sing something sad while Jean Valjean sings his last breath and on cue, you get sniffling sounds from the audience in the darkened theater and I’m like, WHAT!!!??? Talk about a total bummer.

My boyfriend is a Les fan.  He’s seen the stage production numerous times.  I kept glaring at him every time they pulled those harp strings and I heard people sniffle, as if to say, “You better hadn’t DARED!”  It’s one of those moments when I question whether I’m dating the right man.  But then the movie ended and he secretly leaned into me and says, “I wanted to like it a lot more than I did,” meaning he didn’t like it at all.  Then he went into a comparison of the stage version versus the big screen and I never felt more love for this man.

So NOPE!  Sorry.  Didn’t like the movie.  I won’t give it a star score, select a number from 1 to 10, or give it a grade, because to do so suggests that I can do better, but in my opinion the movie sucks rotten tomatoes.  I’m not interested in debates.  You’re free to think I’m dead inside, but in my opinion the movie adaptation of Les Miserables straight-up sucked ass.  That’s straight up to the head up.