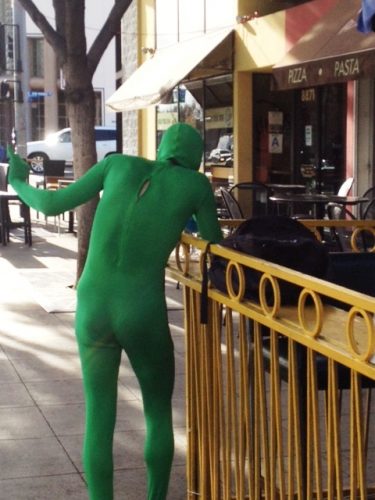 I was on my way to the Post Office in WeHo when I witnessed this random man dressed like a green gimp (Pulp Fiction reference) on Santa Monica Blvd. in front of the Fiesta Cantina.   He was taking a selfy while he sipped on something blue from a giant Margarita glass.  Was this some sort of promotional bullshit to get people inside Fiesta Cantina to get drinks?  Why was he out there in the middle of the afternoon?  Was he wearing a diaper to hide any traces of his moose knuckle?  Why was he wearing a red tie?  Can somebody explain to me the white socks?  And what was up with those nasty chalupa scandals–err, I mean sandals?

I crept behind him and sneaked (or is it snuck?) a bunch of photos to make sure it wasn’t just me seeing green little men (again).  Then it occurred to me that this man didn’t put on a green getup to be left alone while he sipped on this obnoxiously large drink.  I did the polite thing and asked him if I could take his pic.  He broke character and was like, “sure.”  Hearing a voice project out of that blank green face made the moment THAT much more surreal—No, I wasn’t high.  He was right there.  And he was GREEN!  GREEN, I tell you! 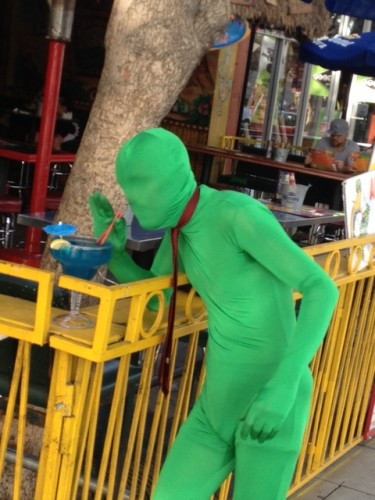 I have to be honest with you, I kinda got off on it.  Seeing green people on the streets of West Hollywood on a random Tuesday afternoon is only one reason why I heart the W.E.H.O.

TILL DRINK DO US PART PLAYING WITH FIRE CAN BURN